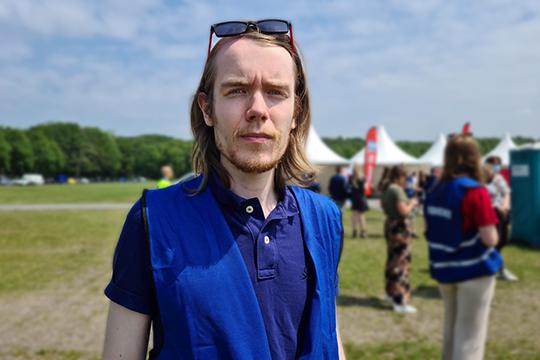 ‘VU should take its responsibility for homeless students’

The SRVU student union will protest on campus because there are hundreds of students without a room, especially internationals. Vice chair of the student union Pieter van Rossum thinks it’s up to VU Amsterdam to solve the housing shortage among its students.

There was recently a massive housing protest in Amsterdam. Why will there be another protest on campus this Tuesday 28 September for international students?

“We’re not solely protesting against the housing shortage for international students, but for all homeless students. If students are becoming homeless, it deserves its own protest. The international students do have a higher risk of becoming homeless because they have a less expansive network. It’s less likely for them to know someone who can help them find a place, or a couch to sleep on. They’re discriminated against when they apply for shared student apartments. And they can’t just drop by their parents’ house. We’re also protesting for the students who live in Maastricht because they can’t find a place in Amsterdam.”

How many students are actually impacted by this?

SRVU is demanding accommodation for all homeless VU students. Where could they be housed?

“We have heard about initiatives in – I believe – Utrecht and Groningen, where a hotel is temporarily rented. That is an option. In any case, it has to be solved. VU Amsterdam needs to manage it now, or else there will be students sleeping in the streets or going back to their country of origin. That is indefensible.”

Is it necessarily VU Amsterdam that should be held accountable, or also the municipality and/or the government?

“We see the growth policy of the university as a huge catalyst for the problem. Many students feel like they were really mislead. They thought: I’ll come here and within three months I’ll find a room, but it turns out differently. We ask VU Amsterdam to acknowledge and take its responsibility. We see that not everything is to blame on the university, but in part due to its policy the housing shortage has worsened.”

Should VU Amsterdam set up advertisements to ward off international students? ‘Don’t come, because you won’t find a place to live.’

“We want better information to be provided for international students. And if VU Amsterdam accepts an X amount of students, then there should be place for that X amount of students. The university has grown too rapidly and now significant compensations are required to accommodate that growth.”

“Our position is: build 5.000 student accommodation. According to the Kences report, the national student housing monitor, there is a shortage of 5.000. Our student population also grow with roughly 5.000 students between 2020 and 2021. They need to live somewhere too.”

How is VU Amsterdam reacting to the pleas of international students?

“The International Office says they’re aware of the problem and they are doing what they can. When individual students go to them, the Office gives well-meant advice: ‘Have you tried room.nl yet? How about Kamernet? But that doesn’t help anyone.’”

What can students do to help homeless students?

“Firstly, I am asking everyone to come support us at the protest. We’re calling upon all students to come to campus on Tuesday at 4 PM. Other than that, the SRVU has set up  the couch surfing platform noroomforus.nl in collaboration with the ASVA and WOinActie. This can be used to find and offer emergency shelter for all students in Amsterdam, not only VU students.”

The original version of this interview can be found on our Dutch website.