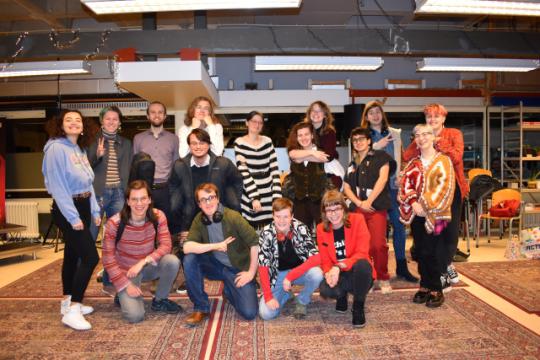 After two years, the Ministry of Education has cut their funding of VU Pride. In anticipation of funding from the university, VU's LGBTI+ network organized a fundraising marketplace to help pay for their future events. A report.

Something green whizzes through the air of debate center 3D. “We have customers, behave!” exclaims organizer Channa Mackenbach. From one side of the room to the other, VU Pride members are playing catch with a crocheted pea. They’re screaming with laughter, drowning out the trio playing guitar and singing in the corner of the room. The atmosphere is exuberant: an hour into their market they have raised 300 euros. “It's almost Christmas, people need gifts,” says Nika, handing out VU Pride stickers at the entrance on Thursday afternoon, December 1st.

“All the gays are gone”, says their partner Ada from behind their collection of clay jewelry trays. They refer to the earrings displayed on the table next to theirs that come in all colors of the Progress Pride flag. Still available are the black-yellow-white earrings for non-binary people and pink-yellow-blue for pansexuals. Organizer Mackenbach: "I expected those would be sold out by now, there are quite a lot of pansexual people."

On the tables around the pea pitchers and catchers, more self-made goods from VU Pride members is displayed. You can buy embroidered pronoun plates, leg warmers, bracelets, vegan brownies, crocheted 'octopussies' for your keychain. Behind one of the tables, PPE student Tomàs is busy knitting while he presents the merchandise he shares with two others, like a knitted hand warmer with the note “I did not have time to make the other one”, and three spatially knitted circles with the disclaimer: “Hats? I don't know what these are to be honest”.

How does Tomás perceive the budget cut from the ministry? “We knew it was coming, we had time to arrange our own financing. But I actually think the university should fund us. It's not that difficult, our rector [Jeroen Geurts, Ed.] is keen on the subject.” Doesn't it feel extra powerful that they can bring in their own money this way? "It feels more like we're forced to make it something powerful, queer people have to be brave often enough."

VU Pride was considered a project for the first two years and was therefore financed by the government, organizer Mackenbach explains. Originally, the money flow was supposed to stop from the start of this academic year, but was prolonged until December. At the time of their fundraising event, it was still unclear whether VU would take over the financing from the ministry – which they now have said to do in the form of a fund for the Diversity Office used to support diversity projects.

To be on the safe side, VU Pride chose to start building their own financial buffer. “We had hoped it wouldn’t be necessary, but this is a nice way to do it. On things like our game nights we could easily spare expenses. At most, we will have less money for snacks and drinks, but we will continue no matter what,” says Mackenbach.

In the meantime, the smell of fresh fries draws most of the VU Pride members to the kitchen. In the opposite corner, an undisturbed individual is drawing a dragon with a picture on their laptop as example. “Oh, this isn’t for sale, I haven't finished my Sinterklaas surprise yet.”