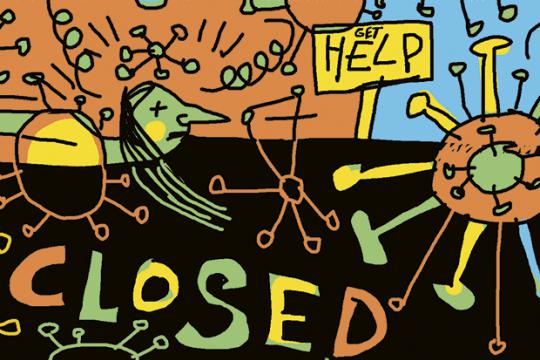 ‘Young people should be the last group to target with restrictions’

Mental health
The number of people with mental issues has increased considerably in the first year of the coronavirus pandemic, VU research shows. ‘But too few people have access to the help they need.’
BY Peter Breedveld PICTURE Berend Vonk

A worldwide increase of 25 percent of people suffering from mental health problems like depression and anxiety was seen in the first year of the coronavirus pandemic. This is shown by a large overview study conducted by psychologist Anke Witteveen and professors in Clinical Psychology Marit Sijbrandij and Pim Cuijpers, commissioned by the World Health Organisation. Young people are amongst the groups hit especially hard. They have felt lonely and isolated because of the lockdown and sometimes even had suicidal feelings.

This is in line with the findings in the Netherlands, according to Sijbrandij. And indeed, it has been shown by several surveys in the past two years that young people in the Netherlands suffer mentally from the pandemic. However, these surveys were always criticized by experts afterwards. At the beginning of April, for example, there was a lot of media attention for a study by Tilburg University, which supposedly shows that things are not so bad for young people. "It hasn’t been fun, but that does not necessarily mean that young people suffer from depression or anxiety", professor of Victims and Mental Health Peter van der Velden told a TV reporter.

‘There is clearly an increase in mental health problems, especially amongst young people’

“Van der Velden’s research was included in the studies we considered”, says Sijbrandij. “It’s very good research, but we did take it a step further in our own survey, by combining all the available research,  and there is clearly an increase in mental health problems, especially amongst young people.”

So why this apparent need to downplay the problems young people are dealing with? “I don’t see that need, it’s just the way the media work”, Sijbrandij says. “When one expert claims something, they like to put forward another expert who says exactly the opposite. But in general, I believe media and policy makers have picked up on the need for mental help for young people affected by the pandemic and it’s my impression measures have been taken. For instance, I’m a mother of adolescents myself, and they received mail by a local institution asking whether they had a ‘corona dip’ and needed help, and giving advice on what to do and whom to turn to for help.”

Too many people still can’t get the help they need, the researchers find. “Therefore, a large-scale deployment of effective programs for the treatment of psychological complaints is needed”, they state in their press release.

Another lesson to be drawn, according to Sijbrandij and Witteveen, is that if there were to be a resurgence of the coronavirus this coming fall, the government should refrain from closing schools and universities. “I do think it’s a particularly problematic measure to take”, Sijbrandij says. “As an assistant professor myself, I am concerned about some of my students who have difficulty getting into gear again now that campuses have reopened”, Witteveen adds. “Quite a number of students have yet to return to campus and I worry that they are precisely those students who suffer from the lack of social interaction due to the lockdown.”

“The pressure to close schools and universities has been tremendous in the Netherlands”, says Sijbrandij. “They were closed relatively soon here, while for example in France, schools and universities have stayed open considerably longer. And I understand the concerns about schools being potential sources of infection, but we need to weigh the advantages against the disadvantages. Young people have relatively little to fear from the coronavirus itself, but they have been hit the hardest by the restrictions because of the virus. Measures may be directed more at grown-ups, the work force, but economic and legal concerns are at play as well. In any case, I think young people should be the last group to target with restrictions.”

Women also form a vulnerable group. “Mentally, women always suffer more than men do from traumatic events”, Witteveen says. “Their symptoms are also different from men. Women often suffer from depression, worrying and anxiety. The causes? They work relatively often in healthcare and at home, they often have double duties, both as income-earner and mother/housekeeper. During lockdowns they probably take up the main role as coordinator of the family, accompanying the children with their home-schooling and so on. But we didn’t really look at what causes their mental problems, just at how vulnerable they are.”

The government should refrain from closing schools and universities

A group you would expect to suffer from mental health issues in particular are people working in healthcare; doctors, nurses. “The problem is that there are no longitudinal studies of the mental health of healthcare workers with a measurement before the pandemic, therefore we can’t say whether there has been an increase during the pandemic”, Witteveen says. “It’s a probability, because a large number of them quit their jobs during the pandemic, but we studied the period from the beginning of the coronavirus outbreak until the spring of 2021. We don’t have data from the time after that. This is why we can’t say anything about long Covid either, because all the serious research in that field is from after that period. Also, the exact definition of long Covid and its symptoms are heavily debated”

The corona virus itself poses an extra high risk for people who were already mentally vulnerable. “People with serious mental issues, like people with psychosis, showed an even more critical disease course when they caught the virus, and a higher mortality risk”, Witteveen explains. “The working mechanisms behind this need further examination, but one possible explanation is that people with serious mental issues often suffer from multiple underlying ailments, like obesity and diabetes.” “Also, they often live in poor neighborhoods, which is a more vulnerable environment”, Sijbrandij adds.

Before the pandemic, there already existed a worldwide gap between the demand and supply of mental healthcare that was only widened by the pandemic. “In the Netherlands the responsibility for youth care had been transferred from the central government to the municipalities which, in combination with budget cuts, resulted in longer waiting lists and lower accessibility”, Sijbrandij explains.

Sijbrandij and Witteveen believe that the stigma on mental health issues has diminished, at least in The Netherlands. “There has been more attention to the treatment of mild symptoms”, Witteveen says, “which is an important means of prevention of larger psychological issues. “Of course, this should not interfere with access to more intensive and specialized treatments.”

10-06-2022
What lessons have higher education institutions learned from the pandemic?
09-02-2022
‘It’s heartbreaking how the university handles the challenges of international staff from a minority background’
27-01-2022
Government relaxes coronavirus measures, nearly everything reopens
13-01-2022
OMT: ‘Wear face mask at bigger lectures’
21-12-2021
Strict lockdown for higher education, again
29-04-2021
'Everything has become a bit monotone'
20-04-2021
Self-tests for students may soon be compulsory
15-04-2021
Students angry about 'unacceptable' postponement opening higher education