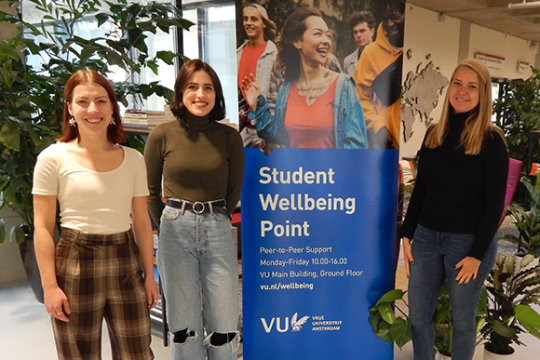 Students can share their worries at Wellbeing Point & Panel

It’s been a long time coming, but today VU Amsterdam is launching its Student Wellbeing Point & Panel, or rather a pilot phase for it. The twin initiatives are intended to increase the accessibility of help and information for students.

The VU Student Wellbeing Point & Panel started as a plan by the USR, in part sparked by a ‘corona monitor’ gauging student wellbeing. The results were worrying enough to convince the university to invest in the new twin initiatives. The Point is a physical and digital place where students can ask questions or share their problems with a fellow student, while the panel connects the many wellbeing initiatives undertaken by various faculties.

COVID as the catalyst

It should be no surprise that the Student Wellbeing Point & Panel are being launched during the pandemic. “Other universities were taking quick action following the pandemic, trying to undertake initiatives for student wellbeing. We felt the VU also needed to do something extra”, says Kimberly van den Ouden. She is one of the students who championed the idea of the Point & Panel at the University Student Council (USR) and is now working for VU Amsterdam as student coordinator for the Panel. While other universities had their own approaches to improving wellbeing, Van den Ouden says the new VU offerings are based on what VU Amsterdam needs and not on what other universities are doing.

However, the Student Wellbeing Point & Panel is not inherently linked to the pandemic. Kat Baron, also a former USR-member and now student coordinator for the Point, thinks the new initiative would have been helpful pre-COVID and will continue to be valuable post-pandemic. “Ideally this will be properly implemented in the university’s structure”, Baron says.

It is perhaps surprising that it took this long to get the initiative off the ground. The idea was already approved back in April, so why did it take until now to start the two-month pilot phase for this seemingly urgent project? According to Van den Ouden, the scope of the project is substantial. “We’re going for a structural overhaul in the way that the VU communicates and sets up wellbeing initiatives. We need to connect with everything already going on and speak with everyone, we constantly make sure everyone is on board. The VU is a huge corporation and there are a lot of regulations.”

‘We constantly make sure everyone is on board’

Van den Ouden is referring to the way the Point & Panel will attempt to connect student wellbeing initiatives of the various departments and faculties. “We hope that at some point in the future all the wellbeing services can be hosted in one physical place”, remarks Kat Baron.

The Student Point & Panel will each have ten student workers on the university’s payroll. The Panel is still looking for someone to represent Acta, VUmc and the faculty Religion & Theology. The students’ training for the Point function is explained by Frieda Schaufeli, the Student Wellbeing Officer of VU Amsterdam: “During the training process we made it very clear that they are not therapists. They are not there to treat people in any way. They are there to guide students, to figure things out together. Students may not know the right tool to seek help, which the Point can help them with. The Point Peers have regular meetings with the student psychological counselors or the VU Social Safety Officer to discuss if they have worries.”

A place to vent

Illustrating why a student would go to the Student Wellbeing Point, student coordinator Kat Baron spoke about her own struggles: “I can think of so many ways a Student Wellbeing Point could have helped me. I have my own struggles with mental health. I know how much conviction it takes to reach out and talk to a professional. It would have helped if there was a student I could simply go to. Even to just vent, let emotions out. And they could have redirected me to the professional help that I needed. If I had access to that, I think I would be a lot further in my studies already.”

Frieda Schaufeli thinks the Point might be especially helpful to international students. “I had a lot of international friends during my studies. I’ve seen them struggle a lot. In a way we had similar struggles, but it was worse for them because they didn’t have a social network and they didn’t understand how things work. Not only practically, but also culturally. In the Dutch culture you need to ask for help instead of it just being offered to you. In some cultures it can be hard to ask.” To cater to all VU students, there will always be a Dutch-speaking and English-speaking person at the Student Wellbeing Point.

The Project Team of the Student Wellbeing Point & Panel expects to organize an official launch event in January. The first two months will serve as a pilot phase and allow the team to assess and tweak the initiatives.