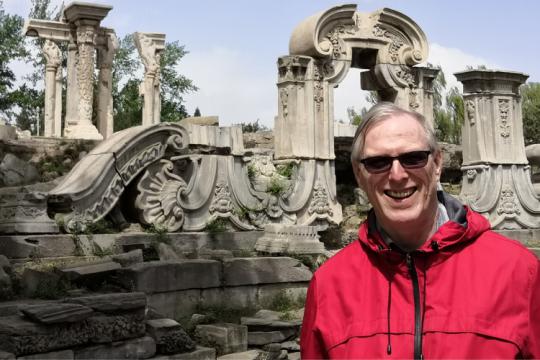 ‘I always become a little bit Chinese when someone attacks China’

comments 3
The West suffers from Chinaphobia and VU Amsterdam lecturer Peter Peverelli believes that is unwarranted. He is co-author of a book intended to counterbalance all this negative publicity.
BY Peter Breedveld

Peter Peverelli, VU Amsterdam lecturer of management and organization at the School of Business and Economics, is bothered by the fact that news about China is almost always negative. “Because China is surpassing the West both economically and even scientifically, people here see the country as a threat”, says Peverelli. He believes this is due to both a lack of understanding and our tendency to judge the world based on Western values. “China should not be as successful as it is while still under the thumb of Communism. So we all go searching for wrongdoings. Politicians, journalists and even academics are focused only on what is wrong with China.”

The West is consumed by an irrational fear of China

Peverelli is not the only one who has observed an irrational anti-Chinese sentiment in the West, also known as Sinophobia. And of course the country is far from perfect. As a result, the cooperation between Dutch and Chinese universities failed in several cases due to far-reaching involvement of the Chinese government, for example. A professor occupying an endowed chair which was partly funded by China, was ordered to avoid “damaging China’s image”.

And then there is the Uighur issue. Governments and organizations such as Amnesty International have accused China of oppressing the Uighur Muslim minority group in Northwest China. According to reports, Uighurs are sent to internment camps for re-education where they are abused, tortured and even sterilized. Reason enough for members of the VU community to vehemently oppose the partnership between VU Amsterdam, the University of Amsterdam and the Chinese company Huawei. The reason is that Huawei is also developing software to help the Chinese government track down Uighurs.

‘Isn’t the police sometimes forced to act violently in protests in the Netherlands as well?

But Peverelli believes the reports about the Uighurs are exaggerated. He says China is faced with jihadism and attacks by Muslim extremists and that some schools in Xinjiang, where most Uighurs live, are calling for separatism. “Yes, sometimes protesters may be treated too harshly, and we should condemn these actions”, he says, “but isn’t the police here sometimes forced to take violent action during protests as well?”

According to him, the stories circulating in the Western media about the Uighurs are demonstrably untrue. And when I point to the Amnesty International report about the Chinese Uighurs, Peverelli points to drawings included in it, by Uighurs sent to and tortured in those internment camps. He says they are full of anti-Chinese stereotypes. By email he sends me two reports from the international thinktank The Transnational Foundation for Peace & Future Research, in which an American report is slammed for claiming China is looking to wipe out the Uighurs.
“That really gets on my nerves”, he says.

While many news items and opinions about China are indisputably drenched in a certain anti-Chinese racism and Western superiority, Peverelli seems to have reacted by going in the opposite direction – blindly defending and making light of everything China does. I share this observation with him and brace myself for his reaction, but Peverelli agrees with me. “Yes, you may be right, it is totally possible that I go on the defensive too quickly”, he says. “I don’t like it when people attack China – it always makes me feel a little Chinese myself.”

This is only a little bit of an exaggeration. Peverelli speaks Chinese fluently, he started learning at the age of 14 and spent a long time living in the country. He was even a student there when the infamous Cultural Revolution swept across the country. He is also married to a Chinese woman and is known within his faculty as Mr China. Peverelli loves the country and spent three months in China during the coronavirus crisis. “While Dutch people complain about a mandatory coronavirus app on your phone and the supposed breach of our privacy and freedoms, the Chinese app lets you get in anywhere. Paradoxically, I felt much safer there than here”, Peverelli said.

'Paradoxically, I felt much safer in China than here'

The way in which China decided to combat the spread of coronavirus is discussed in a book entitled Has China Devised a Superior Path to Wealth Creation? written by Peverelli in cooperation with British management philosopher Charles Hampden-Turner and organizational theorist Fons Trompenaars.

“The book is intended to counter the stream of negative publications about China”, Peverelli explains. Based on cultural differences between China and the West, the authors show that there are other ways of getting things done than by taking a Western approach, and that other forms of democracy exist, for example. Because according to Peverelli, the people’s republic of China is in fact a democracy, as the Chinese are represented all the way down to the district level.

“I am also connected to the Cross Cultural Human Rights centre at VU Amsterdam”, explains Peverelli. “The centre aims to assess situations in individual countries based on the local culture and customs.”

As far as coronavirus is concerned, everything in the Netherlands runs based on protocols and moves forward slowly, says Peverelli. “When China determines that more hospitals are needed, the country simply builds more hospitals. China does what is necessary. Using the coronavirus app, the government can see where an infected person has been in order to track down other infected people who were at those locations. There are lots of debates on the topic in the Netherlands, but the result is that nothing happens.”

The fact that the result of this authoritarian ‘do as you are told’ approach is considerably more positive than the Western ‘let’s talk this through endlessly’ attitude is obvious, according to Peverelli. “The Chinese coronavirus death toll is under 6000, which is low considering its 1.5 billion citizens and also compared to the more than 18,000 deaths counted in the Netherlands. And the US, which has so far seen 650,000 deaths among its 328 million citizens.’ The West has had to pay a hefty price, says Peverelli, for placing the interests of the individual above the interests of the collective. “I can only speak for myself, but I believe this shows that a number of other global issues, such as the climate crisis, food provision and development aid, are better served by a Chinese than a Western approach.”

Does Peverelli mean we should be more like the Chinese? “No, that is definitely not what I’m saying. But a country like Indonesia, that still has the West as an example, shares more cultural values with China, so that is a country that could benefit from Chinese examples.”

When the book had just been published, Peverelli wrote us that he expected the necessary commotion because the contents go against the generally applicable beliefs about China. But it stayed quiet and Peverelli is a little disillusioned about that. “There appears to be a cordon sanitaire on every positive message that comes out of China”, he says. “Even the China experts over at the Clingendael Institute are ignoring it. Saying anything positive about China simply isn’t in vogue at the moment.”

Peter Peverelli, Charles Hampden-Turner and Fons Trompenaars, Has China Devised a Superior Path to Wealth Creation? (published by Cambridge Scholars Publishing, which is not affiliated with Cambridge University Press).

Door Winston Smith op 20 January 2022
What deluded fool Peverelli is. I wonder how much the Chinese government pays him to be a shill for them? There is sometheing very wrong with any government that is afraid to let anyone criticize it in any way. China is a totalitarian dictatorship (while NL is a tax paradise for the rich). Peng Shuai, Ai Weiwei, Zhao Wei, Meng Hongwei, Jack Ma, Gui Minhai... ask them how safe THEY feel in China. His comparisons to the Dutch police are patently ridiculous. China is genociding the Uyghurs and everyone knows it. Peverelli should be deeply ashamed for denying this with his "indisuptably false" garbage. Next thing you know he'll be saying the NAzi's DIDN'T kill 6 million Jews. (The police ARE in English, by the way, not IS.) Wake up and smell the tea, Peverelli. Basically, all the Chinese government knwos how to do is lie and lie and lie. Just look at that olympic phone app they want everyone to use... with its secret list of censored flag words... If you have nothing to fear, then you need have no fear of criticism.. CHINA.
Door Barry Batsbak op 17 April 2022
It's like the saying: "These opinions (lies/propaganda) aged like fine wine". Shangai: "We are starving! I want vegetables please" *While government welds down doors shut and builds a massive amount of nuclear silos in XinJiang. Also, still not stopping any genocide, and literally testing fish for Covid-19 while their superstitious paranoia and internal propaganda backfires and causes Xi to fear for U.S. intervention and inland revolts. Yes, China is a great place to live, some great guys and great business opportunities there... if you have no soul, no decency, no hopes for the future and are deaf, dumb and blind with the IQ of a brick or just plain psychopathic and evil.
Door Johannes Nero op 16 June 2022
The fact that Peverelli can publish books and articles expressing opinions that are not mainstream in the West simply proves that freedoms here are more respected than in China, because if opposing views are expressed in China, the articles are censored and the authors in some cases detained. Here, reports on for instance French arms sales to the Saudis that harm yemeni civilians or about human traficking or corruption are widely read. How many European journalists today are in jail or under house arrest because they wrote something which their government didn't like? I also think he should make a difference between "Asian" cultural values and habits that were imposed as a result of long years of Communist rule.