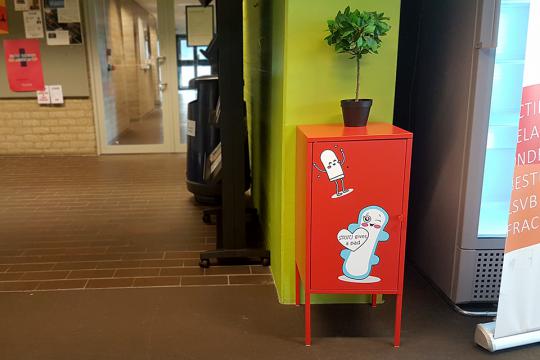 The cupboard with menstrual products at Studentendok
Campus 25 February 2021

'Women should have access to menstrual products at all time'

Those in need of a tampon or pad at the VU can get theirs at Studentendok in the main building, where recently, a cupboard has been placed with free sanitary products. The VU is the first university in the Netherlands to hand out free menstrual products, says Kata Rakić, vice chairman of student union SRVU, who started the initiative.

Where did the idea come from?
“At the end of last year, Scotland made menstrual products free for all, and New Zealand will be handing them out for free at schools shortly. Lilianne Ploumen, at the time a chair member of one of the Dutch political parties, tried to do the same in the Netherlands, but nobody was interested. Why would we wait for politics? We decided to take matters into our own hands at the VU.”

You said on Instagram you’re fighting period poverty. I can picture this being an issue in Scotland, but is poverty in the Netherlands that poignant that women can’t afford tampons or pads?
“You should read the research done by feminist organization De Bovengrondse. Quite a few women in the Netherlands don’t have enough money for them, and use toilet paper instead.”

To grab a tampon or a pad, you will have to walk up to a cupboard that’s in plain sight. Don’t you worry that people will feel too ashamed to do so?
“That’s not something to be ashamed of, we should be able to talk about it freely, the fact that you even ask this question…”

I don’t mean because of menstruation and female issues, but because of the stigma on a lack of money.
“No, I don’t think so. Students are always strapped for cash and the cupboard is also there for those in sudden need who didn’t bring their own. You could go to the Spar on campus in that case, but they don’t always have what you might need.”

Who is paying for the products in the cupboard?
“We set this up together with the Student and Education Affairs department. So the VU pays.”

Do you think it should go without saying that universities provide menstrual products?
“Yes, they should at least be easier to get to. The vending machines on campus sell bike lamps and face masks, why not tampons and pads?”

Why only menstrual products and not also contraceptives, for example?
“That’s not a bad idea indeed, maybe we should venture into that as well. But for now, our focus is on menstrual products. They are a basic provision that all women and girls should be able to have access to at all time.”