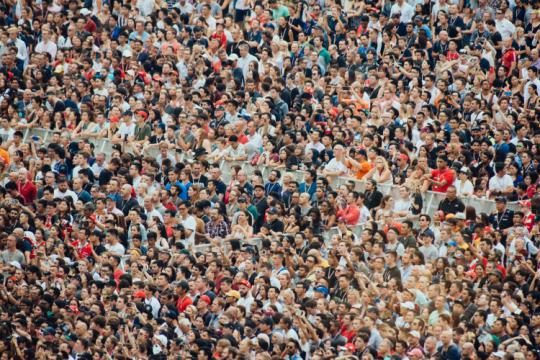 This year nearly eighty thousand international students are studying at Dutch universities: 14 percent more than last year. The total number of students has risen to a record 340 thousand.

This emerges from the official head counts announced today by the universities. They are using it as an opportunity to make an appeal to politicians: they want more options to control the influx of international students.

For years, the universities have been complaining that the workload has become excessive, partly because they are attracting an increasing number of students. One of the reasons for that constant growth is that so many study programmes are taught in English and more and more foreign students are coming to the Netherlands. That has further implications: lecture halls are busy and for some fixed-quota programmes Dutch students are losing out to internationals.

Their wish is to fix the maximum number of admissions for an English-language version of popular study programmes. That automatically means a maximum number of international students, while Dutch students can take on the Dutch-language variant without hindrance. A bill that would make this possible has been submitted for Senate approval but is now on the back burner because of the change of government.

Universities also want study programmes to be allowed to establish a maximum number of students from outside Europe. Then they would deal with applicants from Germany, Belgium and Switzerland, for example, differently from those from China, India and Brazil.

Furthermore, the universities want to be able to set an ‘emergency stop’ if demand for a study programme grows unexpectedly quickly. This is currently not permitted by law. It needs to be made clear in advance whether a study programme admits a limited number of students.

Three universities are an exception: they saw a rise in the number of first-year Bachelor’s programme students. They are the University of Amsterdam (UvA), Erasmus University Rotterdam and the University of Twente. The sharpest fall in new admissions occurred in Utrecht, Nijmegen, Eindhoven and Wageningen. 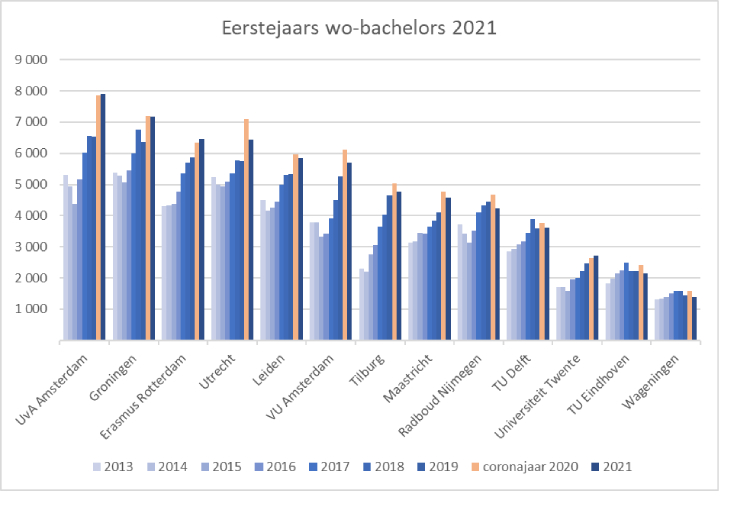 © HOP. Source: Association of Universities in the Netherlands.

The total number of Bachelor’s programme students rose by 3.5 percent but the total number of Master’s students rose even more: 4.9 percent. This is due not only to the number of foreign students but also to the number of students in higher professional education that go on to pursue a Master’s degree at a university. “That number rose by 21.3 percent last year, and this year there has been a further increase of 7.7 percent”, reports Universities of the Netherlands (UNL).

30-06-2022
One in four PhD students fails to cross the finish line
16-06-2022
Bullying and psychic violence rise sharply
16-06-2022
Universities are not allowed to limit the influx of international students
03-06-2022
Paired up students photograph freedom in the city
12-05-2022
More international students have a right to student financing
10-05-2022
Student accommodation: ‘I think it will be difficult this coming year’
06-04-2022
‘It would help if we learn about anthropology in high school’
24-03-2022
Almost half of first-year university students come from abroad