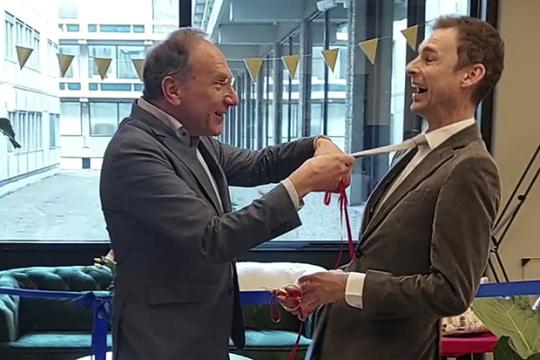 After a four-month trial period the Student Wellbeing Point & Panel opened its metaphorical doors yesterday in the main building.

The open area next to the student desk in the main building, tucked in between bookcases and large plants, has been functioning as a safe space for students to come by and share anything they run into. At the Point, they can turn to a fellow student with a question for help – those questions can vary widely. Sometimes it concerns something simple, like registering for a particular service at VU, others come by to look for support after losing a loved one.

"Often, we already know the answer to our questions but we need a safe environment to put everything together for ourselves," says T Honeysett. As a so-called point peer, Honeysett is a first point of contact for students who come to them. The Wellbeing Panel – working more on the background – ensures that different facilities know of each other's existence and can work together better. "We are going for a structural overhaul in the communication about welfare initiatives within VU," said student coordinator Kimberly van den Ouden in an earlier interview about the project.

During the official opening on Wednesday, March 23, board member Marcel Nollen expressed his admiration for the project: "Students told us they could do this better than us professionals. I didn't believe it, but the result is miraculous. In a professional environment it would have taken three years."

The new VU rector Jeroen Geurts also gave an enthusiastic speech about the project. He noted that these days people are rather looking at prevention than a cure, and according to him that is also the strength of the Wellbeing Point & Panel: students get help before their problems become bigger.

According to the founders of the Wellbeing Point & Panel, the project has not gone unnoticed at other universities. People from Erasmus University in Rotterdam are said to have visited for inspiration. The VU Executive Board is very happy about this as well: "Other universities need to know that we have this initiative and that we're awesome," said an enthused Geurts. A little later, Nollen and Geurts cut a ribbon to mark the official opening.

Student-employees of the Wellbeing Point & Panel will be blogging about their experiences in the near future. The first blog can be read here. A video interview with Kimberly van den Ouden and T Honeysett can be viewed below.