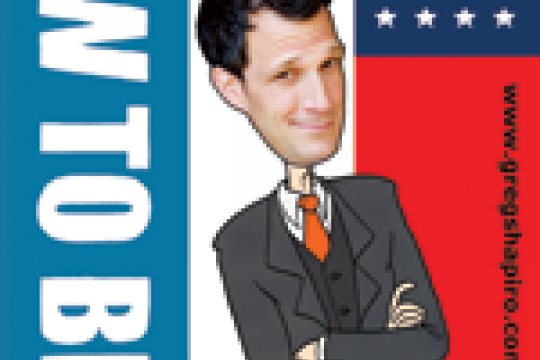 'Get away from me, you sick, disgusting freak!'

While the Dutch first year students of the VU are introduced to this university and to Amsterdam drinking and avoiding doing anything meaningful, the foreign students, who arrived in Amsterdam earlier this week, were offered their own introductory programme.

After a word of welcome in surreal English by chairman René Smit and some practical information in the big auditorium of the main building of the VU-campus, the students were  treated to a very entertaining show by Greg Shapiro, an American comedian living in Amsterdam.

"Ik kan een beetje Nederlands praten", Shapiro said, which means: "I speak a little Dutch. Only I hate what it's doing to my mouth. When you try to speak Dutch and your mouth is telling your brain that it's all wrong, that's when you know you're doing it right."

He was a little bitcritical about his country of residence, for instance when he told his audience how difficult it is to get a medical prescription from your doctor. "You can get weed here, and hashish, no problem, but when you want some antibiotics, the Dutch look at you in terror: 'Get away from me, you sick, disgusting freak!'"

But on the whole he was very friendly about Holland. Maybe a little too friendly. When he talked about right-wing politician Geert Wilders, he said he did not take him too seriously, for in spite of all the anti-muslim rethoric the Dutch queen still wore a headscarve when she was on a state visit in Oman,and the headscarf persuading Fifa to lift the ban on islamic headgear for female soccer teams is of Dutch design.

"As long as there's money to be made, that's what determines the Dutch stance on pretty much everything", Shapiro analyzed.

Mostly he just made innocent, albeit coarse fun of Holland. Of Dutch names, of Dutch brands that sound absurd to an American: a grooming salon named 'Dog-style', a shampoo named 'anti-klit', 'bastard sugar', a notebook with the word 'notities' on the cover, which looks like 'no titties'.

He made a few remarks about the advertising bill boards in Amsterdam. "If you're going to take your children for a walk around the city, you'll want to tell them pretty early about the birds and the bees".

He had a picture of a metal statue, sporting what looked like a giant erection. "In the vicinity of a school!", Shapiro exclaimed. He then showed a picture of Michelangelo's David, with the giant penis of the metalstatue attached to it.

Fun was made of the Dutch national anthem as well. The first lines, according to Shapiro, translate as 'I am Willem of Nassau, I built this country and by the way, I am German', after which tribute is paid to the king of Spain. "These are two countries that invaded Holland", Shapiro jeered. "They actually forgot to include Napoleon Bonaparte: 'I'm Na-poleon Bonapar-te, and I kicked your ass too'."