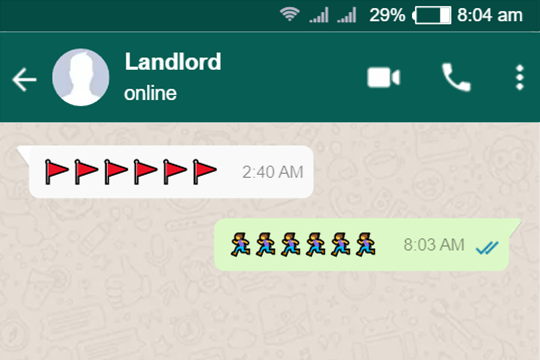 What do you do when you’re desperate for accommodation and a homeowner asks you to get into his car? And would you be willing to cook or clean for someone if that means you can get a roof over your head? VU Amsterdam students speak about their struggles with creepy and inappropriate behavior as they navigate the precarious Dutch housing market.

‘I’m looking for a young female housemate to live in friendship’, says one advertisement on Marktplaats, a popular Dutch online marketplace where anyone can publish ads. The advertiser includes a picture of himself, an older grey man at least in his fifties. A different ad by a 28 year old man is titled ‘female housemate wanted’. The description goes on to say: ‘I would like to date with a nice lady and see if there’s a connection.’

It appears that some people with a home have no qualms about using their ability to provide accommodation to give them an edge on the dating scene. But not everyone is as transparent as the examples listed above. Sometimes the red flags don’t become apparent until you’re already inside their home.

Looking for a young woman

Kim* (22) from the Philippines had a tough time finding a room through Kamernet. She estimates that she responded to roughly a hundred housing advertisements. “Ten or more of those advertisers turned out to be creeps. It’s always middle-aged men looking for a young female tenant, and they would actually be your housemate”, explains the Business Administration student who is about to begin her first year at VU Amsterdam.

She recalls being spoken to by advertisers as if they met on Tinder, using inappropriate emojis such as the winking emoji. “You can tell what’s going on. When you have that gut feeling, just run.” After she declined their offers, several home owners still contacted Kim weeks later, for instance asking for her Snapchat or Instagram. “They get really aggressive with the amount of messages they send. Read the room, I’m uncomfortable. Stop.”

“One guy sent me a photo of himself and shared updates about his life, like mentioning when he came back from the gym. And I’m like: Okay, but we haven’t talked in weeks.” Kim says those uncomfortable experiences contributed to her wanting to give up her search, especially when encountering a lot of these types within the span of three weeks. She has since found a room that she’s happy with in a nearby city.

Ksenija Ustinoviča (22) from Latvia described similar experiences with Kamernet, also receiving the infamous winking emojis. She says she doesn’t want to visit certain places because of shady messages by the homeowners, such as: “Let’s meet in a café, then you’ll see my place. We can get wine.” Ustinoviča went to in-person viewings as she desperately looked for a home while her studies already started.

She shares one particularly strange viewing where she took a guy with her “because I am scared to go to these kinds of places by myself.” The man who owned the place wanted to have drinks and a chat, which lasted for two hours. It turned out that he was already living with a woman and was not satisfied with her, because she was not very approachable. “The girl living there did not know he was searching for someone to replace her. He was preparing it behind her back and showed us her room without her consent”, explains Ustinoviča.

'In case you don’t have a home, you have a home now because I’m here for you'

The man explained that he has a spontaneous personality and therefore would like to be able to knock on Ksenija Ustinoviča’s door and walk in whenever he feels like it. “He also said he wanted us to cook for each other, as if it was a requirement for living there.” He had many strict rules and gave off the impression that he expected Ustinoviča to be responsible for cleaning the common areas. The group went to a café afterwards, where the student of Media, Art, Design and Architecture felt like she was being interrogated about her relationships, her feelings and her motivation for coming to Amsterdam.

She paraphrases how the man then told her “You can call me anytime, I will save you. In case you don’t have a home, you have a home now because I’m here for you.” Because she desperately needed housing Ustinoviča did consider his offer for some time. In the end she found student housing elsewhere.

Student housing protest
Last year the Dutch housing crisis saw hundreds of students in Amsterdam without accommodation while the semester already started. It sparked a protest on the VU campus square as they demanded a solution from VU Amsterdam. The university has since adjusted its messaging, telling international students not to come if they haven’t found accommodation in time.

Get in the car

Cultural anthropology student Barbara Ivanics (25) from Hungary had her own disturbing viewing during the first year of the pandemic. It turned out the apartment she visited had ten beds spread out over the living spaces and smelled of cigarettes. “I had the feeling it was an apartment for prostitutes.” The man offered her a bed next to a wall so she could have more privacy.

Ivanics: “I told him I didn’t want to live there and when we went downstairs, he kept pushing me to get in his car to show me other places. Why would I sit in a car with a stranger? It was very creepy and I was holding my phone in case something bad would happen. After I left without getting in the car, he kept calling and texting me for several days trying to convince me to see more of his apartments.” Because classes were online, she continued studying from her home country.

*Student Kim requested not to include her last name. Her identity is known to the editors.