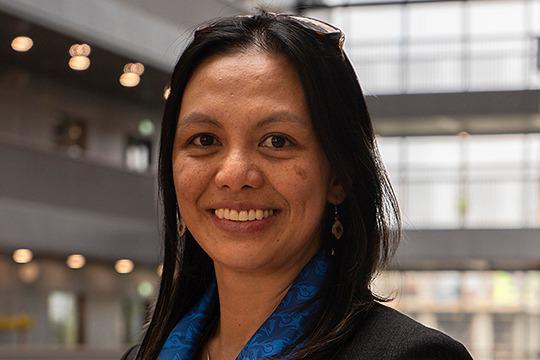 ‘For real diversity you need to go far beyond political correctness’

Myra Colis is an immigrant from the Philippines and a student mother in her forties. She is a bit of a ‘strange duck’ on the student council, where she helps VU Amsterdam define what exactly diversity means, and how to make students feel like they belong.
BY Peter Breedveld PICTURE Henrik van de Pol

Bachelor’s student of Law in Society Myra Colis is well into her forties, a mother of two and a migrant woman from the Philippines. She has had plenty of work experience, having been a radio reporter in her home country, a journalist and a teacher in China, as well as running her own business in the Netherlands. She came to live here with her husband, a Polish expat, in 2012. She survived breast cancer and wrote a book about it, started a new degree at VU Amsterdam in 2019 and is a member of the student council.

In short, Colis knows what it is like to be the odd one out. “My fellow council members were a bit sceptical to start with, unsure if I would have the time for my council work, as a studying mother. But they quickly got used to me and even told me that I bring in a motherly vibe. I don’t know what that means, but I guess they trust and accept me now.”

Colis already had an academic Bachelor’s degree in mass communication, but was told that in the Netherlands, a Philippine four-year degree is equal to two academic years. “So I needed to study for two more years to be accepted as an academic bachelor, but instead of doing the same thing over again, I chose to study something else that interests me, Law in Society.”

'In Europe everything is regulated so strictly and systematically'

A major difference between China and the Netherlands then became apparent, she says. China is different from the Philippines too, of course, but it’s still Asia. “In Europe everything is regulated so strictly and systematically. They look at your credentials to see if they meet a certain set of Dutch standards, without even looking at your skills and experience.”

The same formality is applied when Dutch organisations try to become more diverse, Colis feels. “Nowadays, hiring institutions have a set of criteria to check off for a possible candidate to fill in a vacancy, including whether or not you are a person of colour, LGBTQ, or female. So you start to think you’re chosen because you have these certain characteristics instead of your capabilities. I don’t think that is true diversity. For true diversity you need to go far beyond political correctness.”

An illustration of this superficial approach to diversity is a recent incident at VU Amsterdam which Colis became involved with. “I have a friend, another VU student, who is in a wheelchair, and a member of staff at VU asked me to ask her if she would be willing to be photographed for promotional purposes, to show how seriously the VU takes diversity. My friend refused. “The VU is actually not that friendly towards people with disabilities”, she told me. “In the New University Building, the doors are not accessible and are extremely hard to open when you’re in a wheelchair; and most of the toilets on campus are inaccessible too.”

“The student council flags up these problems and when we tell this the Executive Board or the relevant decision makers, they tell us they didn’t know, or hadn’t realized it, but they’re on it. However, people with disabilities have been complaining about this for so long now. I just can’t understand how you can plan and build a whole new building on campus and still not take people with disabilities into account.”

People with disabilities are the group that gets overlooked the most, Colis thinks, but there’s plenty of work to be done to make many other groups feel they belong too. Take international students, for instance. “This is mostly a matter of language”, Colis says, “which is no problem for us on the student council, because the university provides us with interpreters, has documents translated for us, and so on. But when you look at the information that regular students get, there is so much information that is only available in Dutch.”

Colis knows from her own experience that it’s hard to be accepted by a group of Dutch students. “Not just because of the language. It’s also a matter of Dutch culture. Dutch people seem to keep their distance from people they feel they don’t have much in common with. It takes a while before they are friendly to you. And because of that,  students stay isolated from each other and that’s why the student council came up with the idea of an annual culture day, where people can meet each other and learn about each other’s cultures and home countries. We hope that this will be the first of many events to help students to connect more easily.”

Universities are very slow to adapt to their changing student population, Colis finds. “Take students like myself, with years of professional experience and a desire to upskill myself in order to meet the requirements of the labour market. I’m sure the number of students like me will grow, but we are never included in any conversations the future of the university. For instance, do we really have to study for three extra years or would an accelerated degree programme be better?”

“When the campus opened up again after the lockdowns, we were expected to come back to the campus again, because the VU is a campus university, we were told. But the lockdown was actually a great solution for me, because it was easier to combine my studies with my family life, caring for my children and helping them with school work.I had a lot of extra time. So why can’t I follow lectures online anymore and just come to the campus for seminars and things like that? These are questions that I think are very important if you are talking about diversity and inclusivity.”

‘Now that I know what it feels like to be a 'strange duck', I can better share insights to further propagate the culture of diversity and inclusion at the VU’, Colis wrote in Ad Valvas a couple of months ago. ‘The uneasiness of the first encounters can be traced back to the lack of knowledge and understanding. But once you open up and really accept others, magic happens.’

A sense of belonging starts with a certain mindset, she says now. “I don’t have a problem if people don’t accept me as one of their own. If they don’t, they don’t.” She realises, however, that this is easier for her to say, with a family at home that loves and needs her, than for students who come from further afield and may be completely alone in Amsterdam. “People get lonely, and it’s a good thing that VU recently opened a Student Well-being Point, at the instigation of the student council. But that is for people who are in need of urgent help. We also need more opportunities for students just to meet and talk about personal things in a safe environment.”

“For instance, I have been a student guide for a class of students who are taking the Broader Mind course, which is designed to expand people’s academic perspective. It includes weekly sessions in which students give their personal views on societal issues. A lot of personal stories have been shared and from the evaluation it turned out that students appreciated this immensely. The course takes four months but I think something more structural like that should be organised for students, so they can have these exchanges, where they can make friends, and feel at ease.”