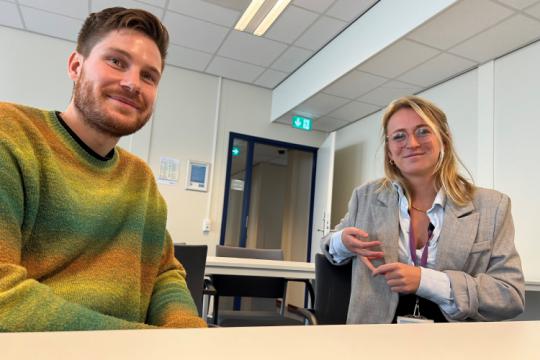 PhD candidates at VU Amsterdam are now represented by an officially recognized PhD council. ‘We are kind of a lobby club that makes PhD related issues visible.’
BY Peter Breedveld PICTURE Peter Breedveld

It took a year and a half of talking and lobbying, but VU Amsterdam now has an official PhD council, the last large university in the Netherlands to establish one. Until a few years ago PhD candidates were united in ProVU, which had a representation in the works council as well, but due to a lack of new candidates ProVU dissolved, leaving PhD’s without employee participation.

The new PhD council, despite its freshly acquired official status, for now will not put forward candidates for the works council either. “Membership of the works council takes a commitment of at least three years”, Margot van de Weijer of the PhD council explains. “PhD candidates, who have a very short period to finish their research, simply don’t have the time to join the works council and do all the work necessary to participate.”

“We are kind of a lobby club, an interest group”, says Timothy Tiggeloven, chair of the PhD council. “Our goal is to deliver input and criticism to the people making decisions which also affect PhD candidates, to make sure PhD candidates are heard and their interests are taken into account.” The PhD council is now structured so that board members get a financial compensation, since they have to put in a large time investment. General members don’t get financial compensation, but alternatively receive extra credit points. “However”, Tiggeloven argues, “recognizing and financially compensating every council member will deliver a signal that the VU takes PhD related matters seriously.”

Certainly no unnecessary luxury, because PhD candidates are by definition a vulnerable group, whose rights and legal status are often unclear, even to themselves. PhD candidates sometimes are taken advantage of, get into conflict with their promotors, are the victims of powerplay and are prone to psychological problems.

“Seventy percent of all PhD candidates are afflicted by some form of stress”, Tiggeloven says. “Their work load is enormous and often has high pressure targets for which PhDs have to make sacrifices, mentally or socially, to accomplish these. Partly because of an excessive emphasis on “excellence” in academic work culture, many suffer from impostor syndrome, the feeling they are not good enough. These problems are bound to affect their mental health.” Recent research has shown that compared to a control group, PhD candidates are twice more likely to suffer from light to severe stress.

‘Their work load is enormous and often has high pressure targets’

“This is, on the whole, driven by a system that demands excellence all the time as we often demand a certain number of publications in four years that many do not accomplish as the average time of VU PhDs to complete the trajectory is more than 60 months”, Tiggeloven argues. “This can lead to systemic overwork, and the feeling of being insufficient, which amplifies impostor syndrome and leads to poor work-life balance, burnouts, and other mental health issues.”

Yet VU Amsterdam has only one psychological counsellor to serve the – give or take – 650 PhD candidates working at VU Amsterdam (not counting the external candidates and the scholarship PhD’s, who are not on the VU’s payroll). “It’s a very accomplished counsellor”, Tiggeloven says, “but it’s just not enough. Next to psychological help, there is a clear need to change academic culture and move from individual competition towards a culture where we can be receptive and accepting about the challenges of academia and support each other mentally.”

‘This can lead to systemic overwork, and the feeling of being insufficient’

Mental health is just one of the spear-points of the council. Diversity is another. “Many PhD candidates are international candidates who have no network and are unfamiliar with Dutch culture and the customs and standards at a Dutch campus”, Van de Weijer explains. “They often don’t receive a proper introduction, don’t have access to a lot of important information and are more or less left to their devices. Some of them don’t even have a VU-ID. VU Amsterdam needs to make policy for international PhD candidates in order to grant them equal rights, involve them better, make them feel welcome and more part of the VU community.”

A  third spear-point is the legal position of PhD candidates. They often don’t know what their rights are themselves. “It’s important they have access to that information before they sign their contracts”, Tiggeloven says. “In case of a serious conflict, PhD candidates are not quick to complain because career-wise they are heavily dependent on their promotor.”

‘In case of a serious conflict, PhD candidates are not quick to complain because career-wise they are heavily dependent on their promotor’

Issues like these need to be addressed structurally and made visible and that’s why an official PhD council is necessary, recognized by all directors and policy makers. “Besides, it’s important for PhD candidates to have a central point where they can share their experiences and talk about what they’re dealing with”, Tiggeloven says.

Still, continuity keeps being a challenge. Both Tiggeloven and Van de Weijer are close to finishing their research and getting promoted, so the board will have new vacancies shortly. Besides, the council is looking for general members. “Ideally we would have a representative for every faculty”, van de Weijer says. “At the moment the faculty of behavior and movement sciences is a little over-represented and we’re still lacking representatives from three faculties.

Reach out to the PhD council via phdcouncil@vu.nl