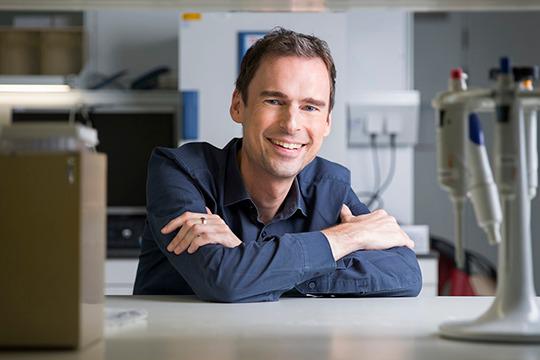 New rector Jeroen Geurts: ‘I hope to be an example’

Neuroscientist Jeroen Geurts will take up the position in January as successor to Vinod Subramaniam. ‘It’s a job that lets me do everything I want to do.’
BY Peter Breedveld PICTURE Sietske Raaijmakers

Five years ago, Jeroen Geurts wrote an open letter to his students in English: Letter to my students or How to become a good scientist. Work hard and make the right choices is what he told them, then you’ll get there.

“When I read the letter over now, I think it’s much too severe”, he says. “I am now much more aware of how much students have to deal with, how many choices they face, which puts them under enormous pressure. I would now want to add an addendum about the existential anxieties this causes, I understand that much better now.”

That’s because in 2018 and 2019 he himself returned to the classroom as a student to study philosophy. “By talking to my fellow students, I realised that there was a good bit that I hadn’t seen yet”, he says.

He decided to study philosophy because he was finding his own field too technical and reductionist. “Neuroscientists are poorly equipped to think conceptually about such things as what exactly the human mind is, for example. You don’t get very far if you reduce that to an interaction between molecule X and molecule Y. We now have a Master’s programme in the philosophy of neuroscience, and I’m super proud of that.”

Now that he will be taking up the post of rector, Geurts will be stepping down from his role as Chairman of the Board of ZonMw, the funding body for health research located in The Hague. He will also be giving up his executive position at the Dutch Research Council (NWO). And he’ll be putting his own research activities on the back burner. “I will still be supervising several PhD students, I won’t abandon them. But I was already doing less research on account of my administrative duties.”

When he was offered the job of rector — he applied after being approached about his interest — Geurts took time to think it over, but he was immediately enthusiastic about it. “It’s a job that lets me do almost everything that is important to me. It had occurred to me before that, if the post ever came vacant, it might be something for me.”

The multicultural studentbody, the themes of inclusivity, get me really excited

Because he thinks VU Amsterdam is such a fantastic place to be, he says. “I’ve been working here now for twenty years and the unique, multicultural student body, the themes of inclusivity, get me really excited. The research culture, too, where we’re constantly seeking to bridge different disciplines, on the lookout for social themes we can approach from an interdisciplinary perspective — VU Amsterdam is really first class in this.”

As Head of the Department of Anatomy and Neurosciences at Amsterdam UMC, he has been able to achieve certain things, Geurts explains, “but the themes that have come to interest me more and more over the years transcend a single department. Those are issues at the level of the institution or the country, and sometimes at the global level. That includes the themes that I’ve been able to address as member of the ZonMw and NWO executives, such as Recognition and Reward. At the beginning, that was primarily controlled by the funding bodies, but now, in the execution, the ball is in the universities’ court. I think it’s really cool that I can now continue to work on Recognition and Reward as rector.”

Recognition and Reward — with less emphasis placed on tabulating publication and citation scores and more on the strengths of the research team — has not been received by all academics as a good thing. Last summer, for example, a group of researchers signed a letter articulating the fear that the Netherlands would lose its international high standing because the assessment criteria for Recognition and Reward would become obscure.

Geurts draws the conclusion that he and his team have not explained things properly. “People think that the term excellent won’t mean anything soon, because everyone is excellent. That is naturally not the case. The idea behind Recognition and Reward is that we facilitate people in those things they are already good in. If you’re a good teacher, then you ought to be able to have a career in teaching; a good researcher who is successful in one grant competition after another should be able to grow as a researcher; and for people who are good in generating social impact we also don’t yet have clear career paths. But it’s definitely not the case that we will no longer be proud of people who publish in journals like Nature or Science. Obviously we are extremely proud of that! But we have much more talent in the academy.”

With Recognition and Reward, it’s not about that single professor anymore, but about the whole team. “It stimulates interdisciplinarity and lowers workload pressure, because first one submits the proposal and the next time it’s someone else. This ensures a constant flow of money from all sides to fund the consortium, instead of going to that one professor who keeps racking up more grants and prizes.

This causes some professors to exhibit “diva-like” behaviour, Geurts once wrote in a newspaper column in the NRC, which he stopped writing for in 2019. Some people reproached him for saying it this way. “Sometimes you have to use harder language to raise awareness about a problem”, Geurts says, “but I wouldn’t phrase it that way now.”

Just because he’s now an administrator does not mean that he will stop being a researcher and scientist, Geurts maintains. “That dichotomy doesn’t hold water. You’re not either a scientist or an administrator. The core of my identity is an inquiring mind. I started out as a researcher in a laboratory, and over the years I’ve gotten more interested in the meta-question of what constitutes good science. That means, at first I was occupied with how to set up my own experiments; now I’m occupied with how the whole system of the arts, hard sciences and life sciences is set up. The post of rector is a natural outgrowth of all my interest in research.’’

There’s a lot of commotion lately about the so-called woke movement that, according to some alarmists, currently threatens the academic world. “I’m enormously interested in this movement, and I would applaud it if it would lead us to realise a more open culture, where it’s safe to say to each other: ‘You just said X, but do you realise that you are excluding certain people by saying that?’ I think that most people don’t realise they are excluding others, and that they too want a welcoming, inclusive society. The woke movement has an important role to play in this, although sometimes I worry about cancel culture, which is diametrically opposed to a safe open culture.”

But even if most people want an inclusive society, as Jennifer Tosch recently pointed out in her Martin Luther King Lecture, it’s difficult for the privileged to relinquish their privileges in an academic world where white heterosexual men are still the norm. “I’m a white man”, Geurts admits, “but not heterosexual. I’m part of a family with two mamas, two papas and a little boy. I’m in a relationship with my husband, the two mamas are in a relationship with each other, and all four of us are the parents of our little boy. I hope that my experience in that area helps further the understanding of diversity. And maybe I can be a figurehead in some small way.”