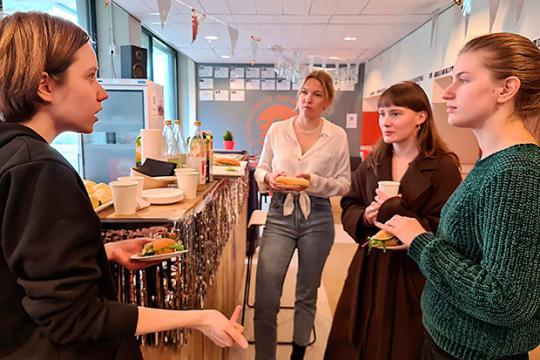 Housing for Ukrainian students
The Ukrainian students that VU lecturer Kilian Wawoe is bringing to VU Amsterdam need permanent housing as they finish their studies. Two of his Psychology students are now coordinating the search.
BY Emma Sprangers PICTURE Peter Breedveld

Earlier this month, Wawoe decided to drive down to Poland to pick up students from the Taras Shevchenko national university in Kyiv. He had been a guest lecturer there since 2013 and concocted a plan with the vice dean of that university to get the students to a safe place. Here at VU Amsterdam they will finish their studies. Since that first trip, Wawoe has gone back to pick up two more groups, the last one arrived last Sunday.

With this growing group of students coming to Amsterdam, the call for housing becomes louder. And it’s no piece of cake finding a permanent place to stay in a city that is bursting at the seams, where they don’t have to pay rent and which offers a comforting environment after having possibly gone through traumatic experiences.

After a lunch with the Ukrainian students and his VU Psychology students, Wawoe asked second-year Psychology student Ana Martins (33) and third-year Jil Beckmann (22) to help with finding permanent housing for the Ukrainian women. Martins has an exam so Beckmann elaborates on their efforts. “I remember how it was, coming to Amsterdam from Germany three years ago. It was overwhelming, and I came from a safe and stable place. It’s nice to be able to take these students by the hand and give something back. And directly helping them is better than giving hundreds of euros to charity – students can’t really afford that anyway.”

Beckmann and Martins set up a Facebook group and started an email account (help.ukrainianstudentsvu@gmail.com) to which people can send offers of free accommodation. And there’s no shortage of supply, but not everything is as suited. “It’s hard to decline offers, people just want to help. But some things are too far away, or not the ideal living situation. Like a traveling student offering up their room, or a family that wants to take in a student. We prefer a place where the girls can go together so they can find comfort in each other.”

‘We prefer a place where the girls can go together’

The students also have a say in where they end up. At the start of their search, Beckmann and Martins sat down with them to discuss their wishes. It turned out that two of them preferred living away from the group with a host family, while the others chose to take the offer of the Student Hotel. Beckmann says that Wawoe, being a Psychology professor, also has a good idea of who would fit in where. They talk on the phone regularly to discuss the wishes of the students, the offers that come in and what they think would work best. “It’s definitely a puzzle.”

For now, they’re mostly targeting people from within the VU community, also from a safety perspective. There have been multiple reports of (Ukrainian) refugees falling victim to human trafficking situations in their search for aid. Beckmann: “We don’t get offers from complete strangers at the moment. A lot of them are from people Kilian already knows. But we still meet up with every good offer beforehand and we call the students often to see if they’re doing okay. We are in close touch with them.”

Close enough that friendships could be forming? Beckmann: “Not that close. I wouldn’t call it a professional distance, it’s more that we have our own lives here as well. We can’t be there for them 24/7. It’s thirty-one girls, they form friendships among themselves more than with us.”

‘It’s thirty-one girls, they form friendships among themselves more than with us’

Beckmann compares their role to that of a buddy for first-year students during orientation. “Now that they’re starting their studies we can help them with that. Everything is going so fast, they’re all in a different part of their study programme so we really try to take them by the hand. Who goes where, how does Canvas [the virtual learning management system, Ed.] work – those types of things.”

Aren’t Beckmann and Martins afraid that the people offering these seemingly permanent solutions will back out prematurely? More and more people who decided to take in Ukrainian refugees in an outburst of philanthropy, now experience fatigue towards their sudden roommates. According to Beckmann this is not something the students necessarily have to fear for, since they opt for housing where the students live by themselves. “But we do tell the people offering in advance that their accommodation is needed until end of June or July. The students need a place where they can finish their academic year without feeling the stress of having to find housing in between.”