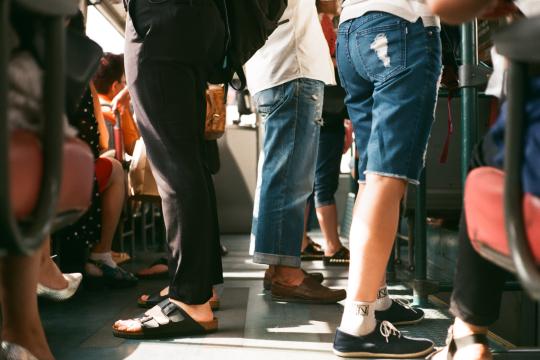 All international students know this frustrating situation: You and your Dutch colleague check out to exit the metro station - and while you pay 2.80 Euros for the ride, your colleague can exit for free.
BY Julius E. O. Fintelmann PICTURE Manki Kim on Unsplash

The OV Student Travel Product gives free access to public transport - exclusively for Dutch students. To be eligible for the Student Travel Product, one needs to either be Dutch, have lived in the Netherlands for more than five consecutive years, or work at least 56 hours a month in the Netherlands. Criteria that are almost impossible to meet as an international student who just moved here.

"In the Netherlands, the student travel product is treated as a loan", explains Yannick van Riet, spokesperson of the ministry of education. That is indeed the case: The public transport allowance is part of a 100 Euros a month loan, which Dutch citizens receive. If they do not graduate within a certain period, this loan needs to be repaid. Van Riet further elaborates, that the European Union Citizenship Directive states that a host country is not obliged to grant livelihood support for students who are not economically active in the host country, for example in the form of a loan.

The European Commission complained, however the Court of Justice ruled in Dutch favour

Interestingly enough, there have been attempts to change this. The European Commission complained to the Court of Justice of the European Union to classify student travel rights as a subsidy for study costs, in which case no distinction would be made between Dutch and other EU students. However, the Court of Justice ruled in the Dutch favour, confirming that student travel rights are exempt from the general obligation of equal treatment.

However, this court ruling does not make the treatment of international students compared to Dutch students any more equal. Especially regarding that other European countries and cities deal with this matter completely differently: In Berlin, students of all private and public universities are generally eligible to the so-called Semesterticket, which offers free public transport. Not only are they eligible, but the universities automatically provide their students with information. Paris offers annual tickets for all students under 26 living in the Île-de-France region, which allows unlimited travel throughout the whole region at the low price point of 350 Euros per year. In Brussels, all students younger than 25 are eligible for a season ticket for only 12 euros a month, no matter the nationality or economic activity.

Twelve euros, that is the amount some students have to spend on public transport in Amsterdam - daily: As a response to the student housing crisis, the student housing company DUWO is set to build a new campus for international students in Almere, where a one-way ride to Amsterdam costs 6.50 Euros. If one travels this route five days a week, the travel costs alone are 260 Euros a month, leaving out the additional expenses on food arising from not being home. Considering that for most students, 260 Euros a month already form a quarter of their monthly budget, if not more, it becomes clear that the way the issue is being dealt with so far is highly unfair - especially because Dutch students - in most cases - do not have to pay these expenses.

A first-year VU student from Italy: ‘If transportation was free or cheaper, I would spend it on healthier food’

Sofia Zampedri, a first-year VU student from Italy, says that she experiences this circumstance as unfair and frustrating. She says that she saw other students refraining from taking even small trips around the city, leading to isolation affecting their mental health. “Furthermore”, she adds, “if transportation was free or cheaper, I would spend it on healthier food.”

Solutions to also make international students receive the benefits of free public transport vary: For one, it is a government decision to no longer treat travel support as a part of student financing (loan), but as student expenses that need to be covered regardless of nationality. But to get around that and for the time being, universities could provide students with an NS-Business card, that allows unlimited travel by train, bus, tram, and metro, as the university of Wageningen already does. Universities could also provide some sort of financial support for students, for example through a reduction in tuition fees or through direct support.

This inequality concerning public transport for international students just adds up to the big pile of unequal treatment that internationals experience in other fields, such as in the housing market, where most apartments are exclusively reserved for Dutch-speaking people, the healthcare system, where it can take months to get access to the vitally important General Practitioner, and higher education itself, where non-EU students have to pay more than triple the amount of tuition fees EU students pay.

The author is a freelance journalist, studying Law in Society at VU Amsterdam