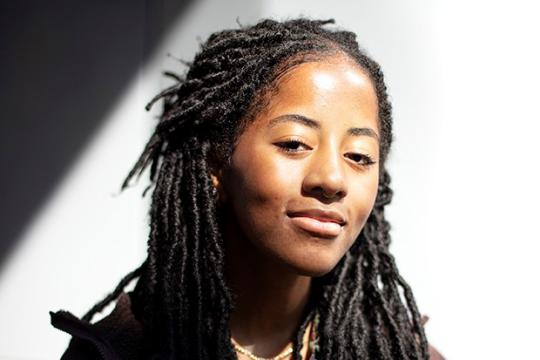 ‘I want to represent minorities in the council’

With her independent party Light Storm, first-year student Valerie Delauney Felipe (19) hopes to take the paralyzing emphasis off of getting good grades and represent the black and female community.
BY Emma Sprangers PICTURE Yvonne Compier

As a high school student, Valerie Delauney Felipe had an all-consuming focus on scoring well on exams. “We were institutionalized to believe that good grades meant you would be successful in life.” It resulted in a fear of failing. When she started her bachelor in Communication and Information Studies at VU Amsterdam, she ultimately was “scared and sceptical.” “But I’m a totally different student now than I was in high school. I see now studying is more than memorizing books, it’s about the experience and the people you meet. I would still say I’m a motivated student, but I don’t like to brag.”

Then how did she manage to sell herself while she was running for candidate for the university student council? “That’s easier to do on social media. But I should have done more promotion to be honest.” Still, she managed to storm next academic year’s council with 386 votes for her independent party, coming in second place overall.

Speak out a little more

Delauney Felipe, born in Spain to a father from Curacao and a mother from Angola, moved here two years ago from Portugal. Since she didn’t speak Dutch yet and lives with her parents, the process of settling in a new city was a little slower. “I really had to get out of my comfort zone and socialize a lot.”

‘Studying is more than memorizing books, it’s about the experience and the people you meet’

By her own account, Delauney Felipe has always been quite active with learning how to deliver speeches in speak-out challenges, but she thinks this new role will still be a challenge for her. “I see myself more as a mediator, but I will have to speak out a little more if I want to fight for my standpoints.”

One of the things Delauney Felipe wants to fight for is lowering the emphasis on getting good grades. “Although I do think the teaching method at VU Amsterdam is more open than I have experienced in the past. But grades are still often used to measure a student’s success. I think it’s hard to tackle. I need some time to think about an approach.” A more palpable goal of hers is to provide free menstrual products in every bathroom of VU Amsterdam. Now, there are some available at Studentendok, but she fears not everyone knows where to find them.

It felt a little uncomfortable for Delauney Felipe bringing up menstrual products in the student council debate mostly dominated by men. “But I noticed it made them uncomfortable as well. And it’s something we have to talk about. We should fight the poverty on this. If VU Amsterdam can provide toilet paper in every bathroom, why not menstrual products? They shouldn’t be seen as a luxury product.”

Besides this, Delauney Felipe aims to represent minorities in the council. VU Amsterdam does too little for the African community, she feels. “There are no student associations that highlight African culture for instance. And the student association from my study program is not very international-friendly. Everyone spoke Dutch even though they knew I spoke English.”

With a student association that has “culture days” for both those in the African community as anyone outside of it who is interested, Delauney Felipe thinks a gap could be filled. “We could have people bring dishes from their own culture for example, and commemorate the diversity of the African culture. I want people to learn more about the African community, and people from within that community to communicate with each other.”

She’s also the only council member with a background in Humanities. “I feel like they are underrepresented, diversity overall is essential. An Economics student might focus more on the budget side of things, while from a Humanities standpoint, the focus might be more on what certain decisions are doing for the community. You need both perspectives.”