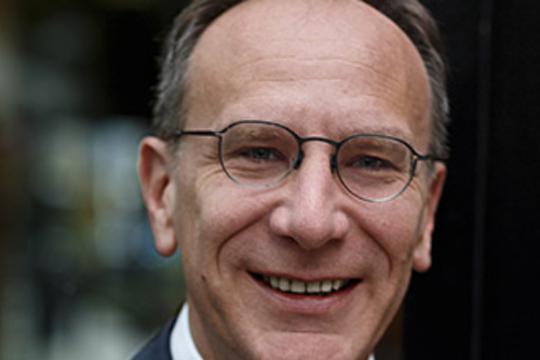 ‘I understand how frustrating and demoralising it is for everyone’

Marcel Nollen promises an independent investigation into the IT problems
comments 1
Executive Board member Marcel Nollen has really had his work cut out for him as a result of the IT crisis at VU Amsterdam. The situation has not left him unmoved. ‘Come and see me; my door is always open.’
BY Peter Breedveld

At the start of our conversation, he emphasises yet again - the IT problems at the university are causing board member Marcel Nollen sleepless nights. It is clear from his body language how genuine this is. “Things really went badly wrong,” he says, “and I understand better than anyone how frustrating, annoying, and demoralising it is for everyone, while at the same time facing all the difficulties associated with Covid-19.”

Nollen has promised that an independent external company will be conducting a thorough investigation in January, to see exactly what went wrong during the implementation of the new Mars digital landscape, and what could have been done to prevent this new IT system becoming a total fiasco. “The Works Council and the Supervisory Board will be closely involved with the investigation.”

In the meantime, a crisis team is looking at ways of resolving the technical problems and the university is sending support teams to everyone in difficulties. “I am in day-to-day contact with the crisis team leadership and every Friday I receive the latest details on where we currently stand.”

Take it on the chin

With final responsibility for operations, there is much that Nollen has to deal with. “You have to take it on the chin,” he says. “You have to respond constructively.” Together with President of the Executive Board, Mirjam van Praag, he has visited every faculty and department to learn about the problems that employees faced as a result of Mars. “The messages we received were loud and clear. It was hard to take, but it also proved very useful.”

The ACTA dentistry faculty Works Council was among those who said the board “showed an astonishing lack of understanding”. During a meeting between the board and the VU Amsterdam Works Council at which crisis team manager Jan-Willem Vermeulen delivered an overview of the problems and the approach to tackling them, there was criticism about the technocratic approach on the part of the Executive Board. “The people aspect was lacking,” said one Works Council member.

The comments made by ACTA really hit home hard, says Nollen. “We will be visiting them again to discuss things.” Other departments and faculties were more positive about the Zoom session with the board, Nollen assures us. However, he also admits: “We have noticed that communication is key, and that we do not always communicate effectively in a crisis.”

‘In a crisis, your communications are not always very effective’

As far as Vermeulen’s overview was concerned, the Works Council itself had asked for it, says Nollen. And indeed, it’s a highly technical matter, which is what he has been brought in for. “But believe me, we regard it as deadly serious when people say they are almost at the point of being unable to cope. We have no wish to see the pressure of work increase even more, or that employees become overstressed. That is why we are bringing in extra employees where necessary and why we have a hit-the-emergency-button procedure, for departments and faculties where help is needed immediately.”

‘To every manager we say, if there is a problem, you must let us know’

There is a similar procedure for students who, as a result of the problems, have no VU-ID, and therefore no VU e-mail address and are unable to register for lectures or exams. “To every manager we say, if there is a problem, you must let us know, and we will prioritise it. Obviously, students should not be the ones to suffer because of all this.”

All those extra pairs of hands will certainly cost more than a million, which is what Nollen had previously estimated. “The cost will indeed be higher than that,” Nollen confirms. “However, the Supervisory Board has impressed upon us the need not to penny-pinch when it comes to solving the problems.” Finding the right people is a greater challenge, he explains. “The job market is stretched, especially when it comes to the type of people we are looking for - those with a combination of knowledge of HRM and IT. They are few and far between.”

During the most recent meeting with the Works Council, Nollen said that the problems with Mars had started with demand among VU employees for more “self-service”. “I did not handle that well,” he says. He does not remember who exactly it was who asked for more self-service. “Throughout the process, that demand was perhaps too rigidly accepted, and that is a question that will have to be answered during the evaluation investigation.”

‘Looking back, going live was not a wise decision’

The Works Council and other parties accuse the Executive Board of not having properly tested the new system before its launch. “We did actually carry out tests three times,” responds Nollen. “And the launch itself was postponed twice because there were uncertainties about the first two tests. After the third time, there appeared to be every justification to go live. But looking back, that was not a wise decision.”

One of the causes of the problems is the IAM system (the identity access management system), which enables students and employees to enter the VU Amsterdam digital environment. “It is not part of Mars, but does affect it. When testing it, we should perhaps have involved the end users more closely,” says Nollen.

Another major cause was the poor level of cohesion between the three IT systems - Mars, AIM, and Toll. As a result, the crisis team - once all the technical problems have been resolved (by the end of the year) - will be engaged with the task of making the system user-friendly, one that is likely to take much of the forthcoming year. This is because the system will do what it has to do by the end of this year, explains Nollen, but the aspects about which employees have complained so much - the excessive clicking, the complicated procedures, the impossibility of delegating tasks - will persist for some time. “But it is also a matter of learning to work with the system.”

“Frank discussions” have been held with the suppliers of the systems, Magnus, Lounge, and Adessa, says Nollen. “This has led to their helping us where they can.” Nollen is unable to say at this stage whether VU Amsterdam will hold them liable. “The answers to these questions will depend on the evaluation.”

At end of the conversation, Nollen appeals to every VU Amsterdam employee: “If anyone has problems, let’s hear about them. Come and see me; don’t suffer in silence. My door is always open.”

Door Charlie op 14 December 2021
Pfff. "He does not remember who exactly it was who asked for more self-service". What can we make of this? It sounds like the typical selective memory loss that has become all too common in managers/politicians when things turn out problematic. Either Nollen is lying here, or he should really get some help to improve his memory (what else might he be forgetting?). I don't remember ever hearing anyone ask for more self-service, during >10years of work at VU. Rather, "self-service" seems an excuse for budget cuts on support staff.

22-11-2021
IT crisis at VU Amsterdam set to last well into 2022
17-06-2021
Protect your students and employees against Big Tech, scientists warn
08-01-2021
International student with technology or IT aspirations? Welcome to the Netherlands!