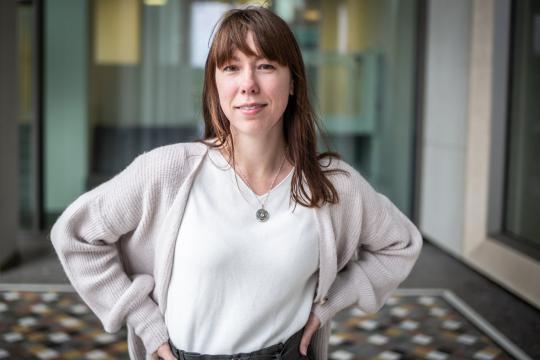 ‘I sat on the floor and cried’

The work of PhD student Rosanne Anholt consisted of a patchwork of projects. She barely had time for her own research. Eventually the pressure took its toll.
BY Welmoed Visser PICTURE Peter Valckx

Earning your PhD is something you have to do on your own time. That’s the feeling you get when you look at the workload handed to Rosanne Anholt (33), assistant professor of public administration and chair of PNN, the organization that represents PhD students in the Netherlands. She was expected to devote 50% of her time to coordinating a joint project with the University of Twente and 40% of her time helping colleagues with their research, which left her only 10% for her own.

For five years she worked under a series of different contracts with one common denominator: a bare minimum of hours to devote to her PhD research. “In effect, I was an external PhD student while being employed by VU Amsterdam”, she says. The fact that she was even able to hand in her dissertation in June – on the handling of the refugee crisis – can be considered a miracle. Less surprisingly, Anholt found herself at home recovering this spring, after suffering a burnout.

Shortly before, in her role as chair of PNN, she had given an interview for the Rathenau Institute, in which she expressed her concern about the large number of young researchers who were under too much pressure. It was published under the title ‘We’re all heading for a burnout’. All too prophetic for her personally, as it turned out.

The last straw came in early June, when she was required to submit a portfolio of how she envisioned her tenure track. “I was in the middle of finishing my dissertation and up to my ears in other projects. I applied for and was given a postponement by Human Resources, but then the faculty board decided that I still had to submit a portfolio within two weeks, like everyone else. After the call, I sat on the floor and cried for a while”, she remembers. “I knew I couldn’t go on this way.”

Anholt was not the only one knocked sideways by the portfolio requirement. “Everyone had worked so hard to keep courses going during the Covid crisis. There were several people who couldn’t manage or could barely manage to put together a portfolio at the time, but no one was listening to them.”

At the same time, staff were receiving emails from the university executives about how they appreciated all the extra effort that teachers were making during the Covid crisis. And how as colleagues we had to look out for each other in these troubled times. The mixed messages left a bitter taste in the mouths of Anholt and many of her colleagues.

‘Whenever I opened apps or emails from work, I would literally have trouble breathing'

What she missed most of all at her faculty was the human touch. Once the pressure had taken its toll, there was little she could do. She struggled to finish writing the introduction and conclusion to her dissertation. “I couldn’t concentrate. I lost track of appointments with friends. I booked cinema tickets and then forgot all about them. Whenever I opened apps or emails from work, I would literally have trouble breathing.”

In addition to completing her PhD, Anholt tried to focus on the basics: sleeping and walking. She didn’t see many friends. Two appointments in one day was such a huge drain on her energy that she needed days to recover. As the chair of PNN, she was unable to do everything she would have liked to do to improve the position of PhD students in the Netherlands. “Fortunately, the vice-chair and the other board members were able to take up a lot of the slack, but it wasn’t how I had imagined things at all.”

Anholt wasn’t at all sure whether she should be open about her experiences. “Researchers tend only to share their success stories; that’s the culture. We highlight the grants we win and gloss over the rejection letters. The last thing you want is to spend the rest of your career living down a reputation as ‘the researcher who couldn’t handle it’.” Despite her doubts, she decided to share her struggles on LinkedIn and other platforms, and met with a wave of recognition. “I hope that my story, along with the stories of others, can bring change for the better. We need to open up about what the system does to people. Otherwise managers will continue to treat it as an individual problem. ‘Oh, are you feeling the pressure? Go take a stress management course.’ Only by being more open can we show that these are structural problems, caused by how we have chosen to organize work as an academic.”

‘Oh, are you feeling the pressure? Go take a stress management course'

One major stress factor is the prospect of facing years of structural job insecurity. “So many young researchers don’t know if they’ll have a contract from one month to the next”, Anholt reveals. “Sometimes they have to agree to odd constructions, a patchwork of small contracts, or they have to go without work for a while so that the employer can offer them a new flexible contract. Sometimes they think they are on the way out, only to be called back in at the last minute. It eats away at people. Occasionally people find themselves in socially unsafe situations with professors whose behaviour is seldom corrected. And while coping with all this, researchers need to keep up their work rate: one gap in your CV and you can kiss an academic career goodbye.”

With the benefit of hindsight, Anholt now says she possibly shouldn’t have accepted the terms of her contract at VU Amsterdam. “But at the time I felt I had no choice.” Anholt found herself dreading the new academic year. Her symptoms were less acute and she was better able to concentrate but in the knowledge that nothing much would change at work, the risk of another burnout was very real.

And then, out of the blue, she was sent a vacancy for a lecturing position at the Centre for International Conflict Analysis and Management in Nijmegen, with the request that she share it with her network. “The kind of place I had always wanted to work when my PhD days were over.” She decided to apply, got the job and leaves VU Amsterdam for Nijmegen in mid-September. She is very happy with this new step in her career.

Anholt’s supervisors at VU Amsterdam were surprised she didn’t want to stay. She had a steady job, didn’t she? But the balance in her new position makes all the difference to Anholt: in Nijmegen she will work four days and devote 35 percent of her time to research and the other 65 percent to teaching. At last she will be able to focus on her research during working hours, which feels like a real luxury after all those years spent slaving away in the margins.