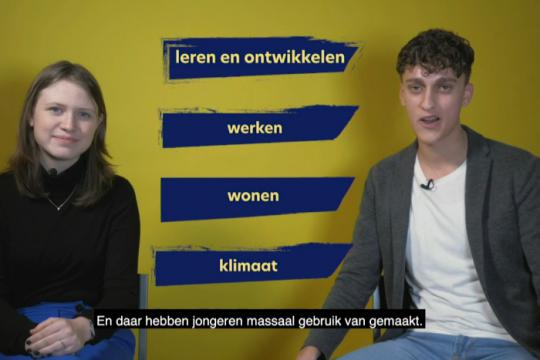 Youth organisations: 'Do something for young people now'

Delayed graduations, housing shortages, uncertain job market: students and starters were already having difficulties and the coronavirus crisis has not made things any easier. Youth organisations demand that the government do something about it – now.

At a press conference in May, it was Prime Minister Rutte himself who encouraged young people to brainstorm along with government in this time of crisis. “Come up with ideas”, he said. “Your criticism is welcome.”

SER Youth Platform and Denktank-Y have answered that invitation in a report that appeared today. After setting up a special coronavirus thinktank, they used an app to ask over two thousand young people for their ideas on topics such as housing, jobs, school, well-being and climate.

The result of the poll: this coronavirus crisis has only made things worse for many students and starters. They feel lonely more often and are increasingly worried about study delays.

Some problems are not new, such as high numbers of zero-hours contracts and the scarcity of affordable starter homes, but they have been made worse by the pandemic. “The coronavirus crisis acts as a kind of magnifying glass.”

The government must now really do something about the situation, the thinktank advised. Young people have come up with all kinds of solutions themselves – from offering more face-to-face teaching for students with problems at home to national streaming of “the best online classes in basic subjects”.

They also want more subsidised work placements and investments in retraining for those who want to switch to "deficit sectors", such as healthcare or teaching. Furthermore, student debt should no longer be an obstacle to getting a mortgage for a home. Two more ideas are tighter control of slumlords and a greater commitment to tackle youth homelessness.

Interestingly, some young people also see a positive side to the crisis: working from home is getting easier and digital education has improved. That we now travel less and make more of our purchases at shops close to home are also good for the climate.

That students and starters are suffering from the crisis is something that was acknowledged by Prime Minister Rutte (or “Mark” as he wants to be called) at the presentation of the report. He also sometimes teaches classes via Zoom. “It wears you out. And for students and pupils, that's what their lives are like right now.”

Dahran Çoban, Chair of the Dutch National Students Association (ISO), explained to him how important it is that young people be given an outlook on the future. She believes it is hard to be hopeful if you have financial difficulties or problems with your living conditions. The package of support announced last week she finds somewhat thin.

She had to explain to the Prime Minister what “quarantine stacking” is. “If you live with forty other students in one house, and several people test positive for coronavirus one after the other, then it could be that you have to isolate at home for three or four weeks.”

Increasing unemployment was also discussed. Çoban thinks that many young people are super keen to contribute to solutions for the crisis. Let them help by transforming theatre halls into study halls, she suggested, or let them submit ideas about digital education. “We don't want businesses to collapse, but if we let a younger generation collapse now, we'll be stuck in this crisis a lot longer.”

Prime Minister Rutte was more optimistic about the job market. “The Netherlands has a strong economy, and eventually we are going to need all those young people again”, he said. “So I'm not really sombre about the long term, but right now it is going to be challenging for a while.”