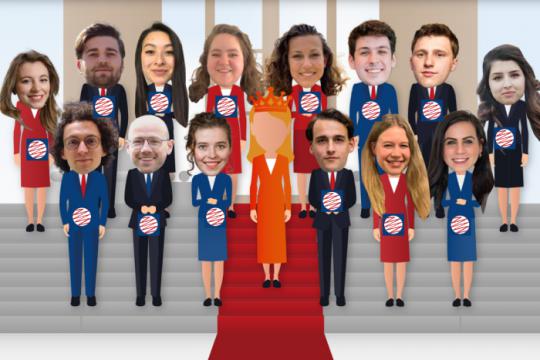 As of this week there is a Dutch Student Cabinet, complete with a student Prime Minister, ministers representing all Dutch universities, and their own coalition agreement. But what’s the reason behind it? “We are not the voice of students.”

That’s right, these student ministers have no formal connection to political parties, nor are they representatives of student unions or university governance councils. However, they have struck their own coalition agreement.

The fourteen universities under umbrella organisation VSNU have each appointed a student representative to fulfil a ministerial post. The Minister of Agriculture studies at Wageningen University & Research, and the Minister of New Delta Works is from Delft. The Minister of Sport and Exercise Hila Bawary is master's student Health Sciences at VU Amsterdam.

This formation of this alternative cabinet has resulted in a series of brand-new ministerial posts, including New Democracy, Innovation, Peace and Healthy Living. Each minister has written a short and concise proposal explaining how they see the future: where should we be heading? All these documents have footnotes referencing scientific articles.

The oldest minister in the student cabinet is the 40-year-old student Walter Loog of the Open University; he has taken responsibility for “life-long learning” and thinks the government should treat all students equally, whether they are enrolled in fulltime or part-time degree programmes.

The Prime Minister is from Twente University. His name is Timon Metz, and he’s doing a Master’s in Industrial Engineering & Management. He was chosen from 25 candidates. Not by students, but by someone in the Department of Marketing and Communication, plus a few others.

So who is this PM actually speaking for? “Hopefully I speak on behalf of science and the universities”, Metz says. “We are not the voice of students! We are not of any political stripe. What we do is translate scientific knowledge into policy for this country in twenty, thirty or fifty years. It doesn’t matter if it’s left, right or diagonal.”

It’s noticeable that education and research are approached somewhat functionally in the standpoints of these ministers. For example, the 21-year-old Minister of Innovation, Dirk van der Meer, is advocating rolling out “challenge based learning” for higher education. This would allow students to work on innovations aimed at solving the problems facing society. Art and culture – to name a few – have not been given a role.

This ‘coalition agreement’ doesn’t cover everything, Metz admits. “We also don’t have a Ministry of Finance. We want to stay away from real politics – well, obviously, you can’t completely. But we want to look at the long term from a purely scientific perspective.”

Briefly put, a student cabinet that doesn’t speak on behalf of students but on behalf of scientific knowledge. And one that doesn’t want to be political, but is anyway. In a kind of parody of the traditional new government group shot, the ministers can be seen with red election ballot circles placed on their stomachs, but no one elected them.

“We are doing all of this tongue-in-cheek”, spokesperson Piet van Ierland said on behalf of the universities. “We are helping with the formation of the real government from the sidelines, but this is not a lobby for higher education and we are not creating a new political platform. Dutch universities have a lot of knowledge that is worth sharing. We want to challenge political leaders to look further afield: let others get involved in strategic thinking.”

The students were free to write whatever they wanted to, he said. The only pre-condition was that the student ministers had to look beyond their own opinions and back up their writing with references to scientific literature. “Not populism, not your own opinion, but sound ideas based on really solid knowledge.”

The student cabinet’s coalition agreement was presented to outgoing Education Minister Ingrid van Engelshoven this afternoon at a special gathering.