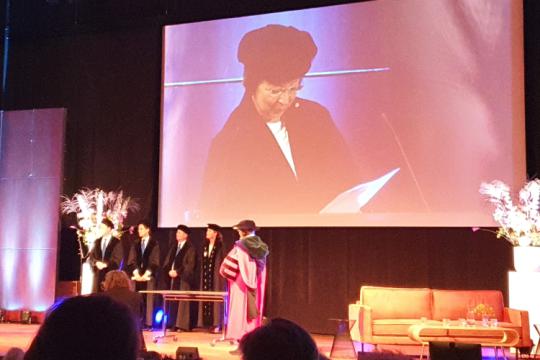 VU Amsterdam will work on its internal connections, said chair Mirjam van Praag at the opening of the academic year, at which an honorary doctorate was awarded to leadership expert Manfred Kets de Vries.

In recent years, VU Amsterdam has invested in its external connections, from now on extra care will be given to internal connections. VU president Mirjam van Praag said in her opening speech at the opening of the academic year.

In an organization with a great sense of belonging you have to be courageous and not be afraid to take up leadership. People should not be afraid to share good and bad news, Van Praag said. They express their emotions, their doubts and their fears. They are truly open, good listeners, they show their vulnerability and they are in touch with themselves. This is the so-called art-of-engagement.

People should not be afraid to share good and bad news

Van Praag then immediately moved from word to deed by showing her own vulnerability, when she confessed that good listening, "deep listening", was not her own strong point. That she herself still had a lot to learn.

Loneliness at the top

What all this internal connectiveness will lead to, according to Van Praag, is and end to the “loneliness at the top”. That top will even disappear, for leadership will be placed at the heart of the organisation. And she emphasized the importance of the "bigger picture", of transparency and of listening and giving space to one another.

This apparently brought her to the slightly calamitous implementation of the new IT landscape at the VU, better known as 'Mars', “which we are still repairing”, said Van Praag. Mars made it painfully clear, as was also apparent from an evaluation by an external agency, that VU Amsterdam still has a few points of improvement in the area of ​​listening, transparency and giving space to others.  VU Amsterdam has taken the evaluation to heart, according to Van Praag. "That is why, based on the principle of art-of-engagement, we are now working on an organization that will make the campus a nicer place with more interconnectedness."

After Van Praag's opening speech, psychoanalyst, management scientist and economist Manfred Kets de Vries was bestowed an honorary doctor's degree by VU Amsterdam. Kets de Vries, professor of human resource management and leadership development in Fontainebleau, was interviewed by Andrew Makkinga, but showed himself hard to grasp. Makkinga wanted to know what, according to Kets de Vries, makes a good leader, why people like Putin are bad guys, why power corrupts and the like, but Kets de Vries shrouded himself in mistery like a wise monk in an old karate movie, constantly smiling mischievously.

“If you want to be loved, you have to buy a dog,” he said. He also made a number of the fact that the Dutch were so direct, but whether he thought that was a good or a bad thing did not become clear. “People don't know themselves well,” he said, and he explained that it doesn't help to foam at the mouth when someone in your organization brings you bad news, because then no one will tell you anything anymore.

Kets de Vries liked telling anecdotes, but what he meant by them was not immediately clear to everyone. At the end he started talking about an old Swedish movie, Wild Strawberries by Ingmar Bergman, about an old man who is about to get an honorary doctorate, then suddenly he started talking about Hedonia and Eudaimonia by Aristotle and he concluded by saying that he had never received an honorary Dutch doctorate before. "I'm like Groucho Marx," he said, "Hello, I must be going."

But he couldn't go, he had to stay put, because a sort of panel discussion followed on the basis of four films in which the VU's collaboration with social organizations was central. In addition to Kets de Vries, six other experts were invited, all of whom rode their own hobbyhorses about leadership. All this in the space of 22 minutes, so this became a scattershot affair. A few interesting things were said nevertheless, for instance by VU alumnus Michel Scholte of a company named True Price, who said that leaders too often have "a backbone of whipped cream", which was a direct quote from the great Dutch leader Geert Wilders.