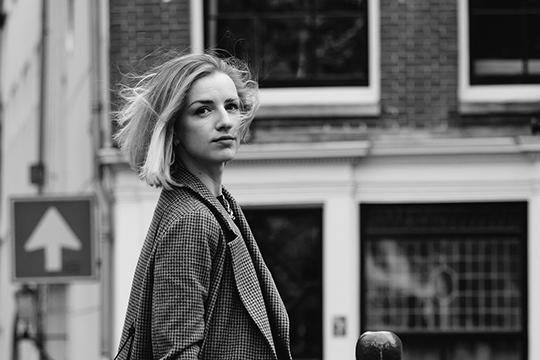 Just two hours after finding out her home country Ukraine was being bombed and invaded, VU Amsterdam lecturer and PhD candidate Nina Onopriychuk was speaking in front of a class. She shares the experience of suddenly finding out that a big part of her family is in mortal danger.

“Yesterday I woke up at seven in the morning to messages from my family and friends in Ukraine. They were telling me not to worry too much about them. That they will try to be safe. I was shocked. I never expected that Russia would attack. We still hoped this was some sort of ruse to scare the West.

“After that initial shock, I had to teach a class at nine and decided to go through with it. It was a guest lecture for American students, not at VU Amsterdam. It ended up being the most difficult lecture of my life. The subject happened to be the value of the European Union. I kept thinking to myself: we have wanted to become a member of the EU since the fall of the Soviet Union. There have been so many opportunities to work this out, but we were left alone."

“The thought of not knowing how my family was doing resulted in a few panic attacks. I have decided to take it easy since then. I am three trimesters into my pregnancy, so I have to stay calm and not stress the baby. My maternity leave officially starts next week. I could barely sleep last night because I wanted to keep up with how my family in Kyiv were doing while the city was about to be bombed. Some of my friends left the capital, it took about twelve hours to reach our city three and a half hours away. I try not to bother them too much, so I only text about once per day.”

Reaction VU Amsterdam
VU Amsterdam has responded to the invasion in a statement. It says it is in touch with its partner university the U.N. Karazin Kharkiv National University in Kharkov and is looking into possibilities of offering help to colleague academics. It is also looking into ways to assist Ukrainian and Russian students. The International Office can be contacted with questions or concerns.

“I was born in the tiny city of Shepetivka, 300km to the West of Kyiv. My parents left in the early 2000s to give me and my brother a better life, so we went to Spain when I was ten. Although they were highly educated individuals, they worked bad jobs just to give us a chance to succeed. Now I have lived in the Netherlands for six years, while my parents are in France and my brother is in Spain. But I have a very big family and many of them are still in Kyiv and the West of Ukraine.

“At the moment I am especially worried about two of my dear cousins. They serve in the military and are on the frontlines defending Ukraine from all sides. It also upsets me that I cannot talk to my grandmother because she lives in an area with poor network coverage. I hope to reach her soon."

“What I want most of all is for no harm to come to civilians. Their safety should be the first and foremost priority. I also find it important that the West unites to provide help and assistance. Through economic sanctions, but also military assistance to Ukrainian army. Some European countries are pushing back against sanctions, I hope they realize there is more at stake than just gas prices. This will and has already impacted everyone living throughout the European continent. I hope they realize what an atrocity this is.

“Some Russians are standing up to the invasion with manifestations, but we expected more from the Russian soldiers. We hoped they would understand how pointless this war is. That it’s an attack on a civilian population. On children, the elderly and on peaceful people. We hoped for a voice of reason within the Russian army, but it has been absent.”

Door Rob Kloppenburg op 01 March 2022
Beautiful and moving interview! The situation moved me so much that I had to go to the Dam in Amsterdam (by bike from Uithoorn) yesterday to show my support for the Ukrainians and anger to Russia. I also wrote an angry email to the Russian Embassy signed with 'Met zeer onvriendelijke groeten'. In this email I reminded them at why the Molotov cocktail is called Molotov cocktail. According to Wikipedia this stems from the 'Winteroorlog' between Finland and Russia in 1939, which started after Russia provoked Finland by bombing their own territory very near to the border with Finland and accused Finland for doing that. When Finland refused to offer excuses Russia invaded Finland. How familiar!!! I think more people could write an email to 'our' Russian Embassy, although I see that their website cannot be reached at the moment... Their email adress is: infocon.nl@mid.ru
Door Jeannetta van … op 03 March 2022
I am very sad. I am also worried. Sad for Nina’s situation and sad for all the Ukrainian people who are now living in fear. For their own lives, their children, their family, their country. I feel sad for Russian people who dare to speak up and end up in jail, or who are too afraid to speak up. I also feel sad for all those people in the Baltics who are now living in huge fear that they will be next. Who have already been advised by their governments to prepare themselves by stocking up on food and drink. I think it is important that we all express our concern and solidarity with Ukraine. More so, because this is a brutal invasion of a sovereign democratic state by a bully who forbids Russians to use the word ‘invasion’ and who has his own people who peacefully call for an end to this war arrested while threatening millions of civilians with nuclear missiles and WWIII. Maybe the VU could express its solidarity by raising the Ukrainian flag. If only for one day.