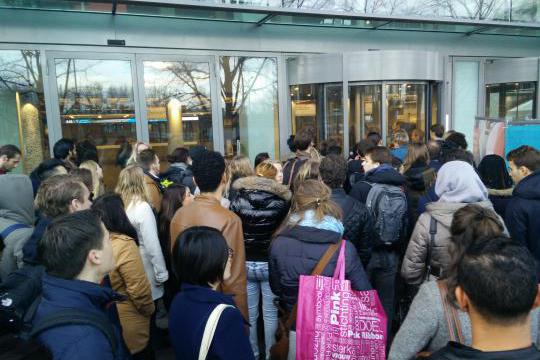 Students will be attending classes on campus in September, and they won’t have to maintain social distancing anymore. But face masks will still be mandatory and no more than 75 students will be allowed in a lecture hall.

This is the ‘basic scenario’ outgoing Minister Van Engelshoven has sketched in a letter to administrators in vocational and higher education. Educational institutions can use this scenario to prepare for the new academic year.

In September everyone will still be wearing a face mask in foyers and hallways. The arrows on the floor indicating walk routes will also not be disappearing. Educational institutions have to set up routing and manage space in their buildings “such that social contact remains limited”.

Moreover, students and unvaccinated staff will make voluntary use of home testing kits “in order to enhance the epidemiological picture”, the Minister is hoping. She wants to prevent superspreader events.

Students will in fact be able to assemble in numbers exceeding 75 for the purpose of sitting exams. There will be no limit on numbers for libraries and other study locations either.

That is, if everything goes according to the Minister’s expectations. There are two back-up scenarios with tougher rules. In the first back-up scenario students would be given access to ‘bubbles’ without social distancing if they can produce proof of vaccination or negative test results. In a second stricter back-up scenario these bubbles are not allowed either and teaching will continue as much as possible online.

Conversely, there is also an optimal scenario where Covid-19 has practically disappeared. In that case, students will still have to stay home if they have symptoms but the other measures will be scrapped: no home testing, no social distancing, no limit to the number of students, etc.

Institutions will still have to be smart about scheduling so that students won’t all be catching the bus, train or tram at the same time. Schools will be working with public transport companies to prevent commuter peak periods.

And what about orientation week events? “These activities are really important for students who are starting their study programme”, the Minister believes. The faster organisers know what’s allowed and what isn’t, the better. In the so-called basic scenario orientation weeks will go ahead as usual, but mayors and safety regions will still have to make agreements on ‘preconditions’.

The government has asked the experts of the OMT (Outbreak Management Team) to get off the fence and say which scenario it’s going to be no later than by July.