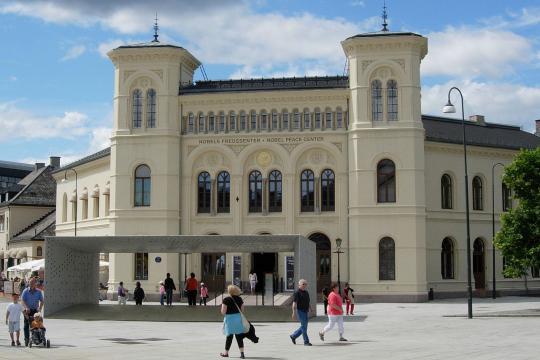 A group of VU students has carefully considered who they would like to nominate for the Nobel Peace Prize. They recently submitted their official nomination for the International Work Group for Indigenous Affairs (IWGIA).

The students take classes given by Wolfgang Wagner. As a professor he specializes in conflict studies and peace studies, which gives him the right to nominate people or organizations for the peace prize.

“I never exercised that right”, says Wagner, “but now it seemed nice to make a nomination together with my students.” Eventually they nominated the organization IWGIA, which works with indigenous populations in various countries. Its main office is located in Copenhagen, where it for instance works with the Greenlandic Inuit.

Jari Tönjes, master’s student of Law and Politics of International Security: “The IWGIA doesn’t speak for indigenous groups, but facilitates their ability to share their own points of view. Approaching things in that way spoke to us.” Fellow student Florine Kits van Heijningen adds: “In looking after the interests of indigenous groups, various important problems come together: minority rights, climate change, peace-building. Those are all issues which can eventually lead to armed conflicts.”

The idea to nominate a specific person was quickly rejected by the students. Kits van Heijningen: “A person can afterwards move into a different direction, making the Nobel Prize a mistake.” Wagner: “I thought my students would nominate people, but that was not the case.” What additionally stood out to him: “They nominated organizations that aren’t at the frontlines of armed conflicts, but are working on peace more indirectly.” War Child was also under consideration, but it fell short because there was a public discussion about the salary of the director a few years ago.

The nominated entity also had to be inspiring, according to the students. “The most famous Nobel Prize winner for people of our generation is Malala Yousafzai, the young woman from Pakistan who fights for the rights of girls and women in her country. She is a source of inspiration for people of our age.” That is why Tönjes nominated Jane Goodall. “The way she fights for the climate is inspiring. She has integrity, appeals to people. She works a lot with young people.” Eventually Goodall didn’t make the cut because she is a person and already quite famous.

Through Zoom the students met with people from IWGIA. “They needed some time to reflect on it. They weren’t sure if they wanted to be nominated”, says Wagner. “What would it mean for their organization if they won? Would they be able to handle it? How would the minorities they work with feel about it? This required them to ask around and discuss it.”

The students were excited after the meeting. And two weeks ago Wagner sent his nomination with accompanying motivation to Oslo. The winner of the Nobel Peace Prize is announced in October and awarded on the 10th of December. Aside from professors who specialize in matters of peace, former winners and members of the Norwegian parliament can also submit nominations.