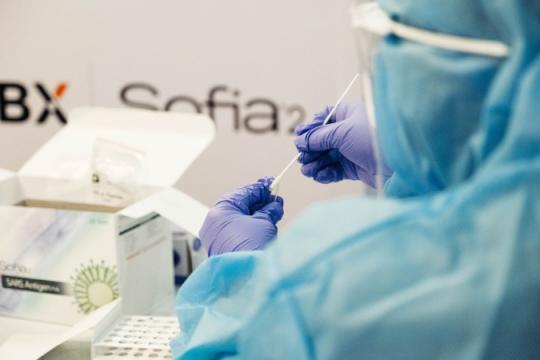 Rapid testing on campus sounds easier than it is

Are rapid tests going to help students return to campus this spring, as the government had hoped? This remains very much the question, because trials of these lateral flow tests seem to be requiring more time.

It’s possible that higher education could re-open in some small way at the end of this month. The idea is that students would then be able to get away from their laptops for one day a week for classes on campus.

In order to make this as safe as possible, we have to perform “as many lateral flow tests as possible in advance”, Minister of Health De Jonge said last night during the press conference.

Taking a quick test before you come to campus. It sounds simple, but it is not that easy in practice. Pilots were set up all across the country for good reason: to discover how educational institutions would be able to provide safe on-campus teaching.

We are still awaiting the results. Vrije Universiteit Amsterdam, for example, has just gotten started. “We are studying how to make classroom teaching more efficient, keeping in mind the 1.5-metre rule”, the spokesperson said.

Vrije Universiteit Amsterdam is collaborating with other institutions, such as Amsterdam University of Applied Sciences on this research. They are testing students and staff before they enter buildings, as well as measuring the degree of enthusiasm. The pilot is set to run until mid-August even though the first results are expected at the end of April.

Minister Van Engelshoven has her heart set on a partial campus re-opening in the spring. “We want to do that as quickly as possible, as long as it’s safe and responsible to do so”, she told the ANP news agency.

So in various locations across the country educational institutions are busy conducting trials, but as is the case with all research: it takes time. And it will be a long time before the 1.5-metre rule can be relaxed, so full lecture halls are not even on the horizon, even with rapid testing.

There are a total of eight pilots at vocational colleges and institutes of higher education. The researchers should be able to share their results by 1 May, Minister Van Engelshoven wrote to the House of Representatives in response to written questions from the ChristenUnie.

But how much will researchers know by 1 May? From an article in Profielen, the University of Applied Sciences Rotterdam newspaper, it seems that the trial period there will not end before mid-May. After that all the results will be collected.

These experiments aren’t as simple as they look. At Avans University of Applied Sciences they are trying to create so-called “bubbles” of students and faculty, in collaboration with HAS University of Applied Sciences and the Koning William I institute for vocational training, to limit the risk of infection. Setting up bubbles is in itself an experiment.

“Such groups change classroom or laboratory, the students interact with more than one faculty member: how does that affect such a bubble?”, a spokesperson explained. “We’re starting with a small group, and in about eight weeks – give or take – it should be expanded to about 2,500 students.”

At Fontys University of Applied Sciences they are also busy conducting trials. They are working with saliva tests and triage to see if they can stay ahead of the virus. The new testing method has to be “validated” to find out whether it works well enough. “We will be able to share the first interim results in April”, a spokesperson revealed. It’s possible that this approach could be deployed in May “on a limited scale”.

In short, before the results are put together and conclusions are drawn from the pilot studies, the summer holidays might be upon us. By then many more people will have been vaccinated as well, and the outcome of the studies might be somewhat outdated.

Perhaps a few minor restrictions can be eased in the coming months, as the government announced yesterday; but with or without rapid testing, this academic year is not going to go back to normal. We can only hope that things will look better come September thanks to the vaccination programme.

But this also raises new questions. What will we do if some students or staff members refuse to get vaccinated due to a belief in conspiracy theories or erroneous health concerns? Will they then be denied access to campus?