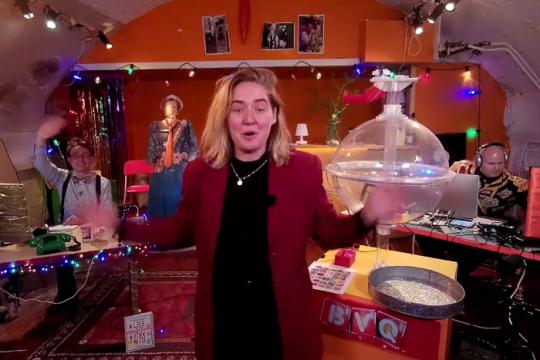 No Bratwurst for Rector Subramaniam

Student organisations and members of the executive board and people from Student and Educational Affairs got together for some bingo and chit-chat and it was pretty hilarious.

"Bingo is the only thing left for us to do, so let's play some", Rector Magnificus Vinod Subramaniam said. "These are crazy times, and I want to have some fun with you." The rector seemed a little bit hyped at the beginning of the digital bingo yesterday. This was apparently the alternative for the annual get-together organised by the VU around this time of year, when the executive board and the different student organisations stick their heads together to talk about stuff in an informal setting.

So every participant got a bingo card with images of VU-related things, from portraits of the executive board members to VU buildings, the famous 'Fish Bowl' (Vissekom) as the largest lecture hall in the VU main building is called and even the döner stand in front of the VU, probably the first place where every VU student and employee breaks their New Year's resolutions.

But we were all sitting at home, around 40 participants in total, behind our computers, like we've been doing every day for more than a year now, looking at a broad-cast via YouTube, live from a studio at the VU Griffioen cultural center, which was decorated like a Sweet Sixteen party was about to start there. In the studio were three sympathetic characters, a sound guy, a geeky computer guy with a bowtie and the show host, a giggly woman I think was named Cat. It all had the atmosphere of night time TV.

Balls with words on them corresponding with the images on our bingo cards where extracted from a bingo machine. Well, you know how bingo works. If you had a bingo, you could call to the studio. First you had to have a horizontal row, then vertical one, then a cross and eventually a full card. Cat answered the callers on a mobile phone, which was on speaker mode but not connected to a sound system, so it was hard to understand what they were saying. 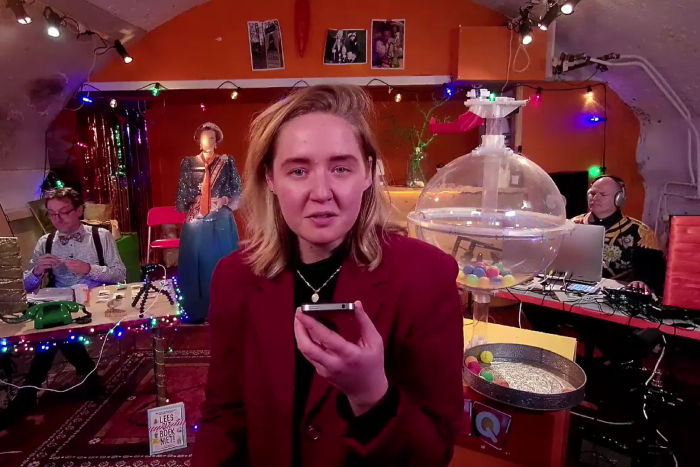 First a German student called, who won a VU sweater. Then I think someone from the VU International Office, who won a coffee session with Subramaniam, which was later changed to a döner session. The director of the student and educational department (Student- & Onderwijszaken) had a cross (I don't remember what the prize was) and the chairwoman of the Central Student Council, also the vice chairwoman of student union SRVU, Kata Rakić, had a full bingo and won a book voucher worth 150 euros. Cat was very happy Rakić won, because of the cabinet with free tampons and sanitary pads she (as vice chairwoman of the SRVU) had been able to realise at the VU. "You earned it through and through!"

Jokes were cracked. The chairwoman of the executive board, Mirjam van Praag, was a picture on some bingo cards. The bloke with the bow tie, who hilariously called her Wilma, said she was a prize (which apparently meant you could win a meeting with her if you had a bingo). She turned out not to be a prize. "But she looks like a prize", Cat said.

Another picture showed the academic cap that professors wear at ceremonies and American students when they graduate from college. The guy with the bow tie said it was called a mortar board hat, with mortar board translated into Dutch by the sound guy as "troffel". "How come you know thse words and I don't, while I'm the only one having graduated from university?" Cat asked. "Because you don't know what real work is", the sound guy answered. 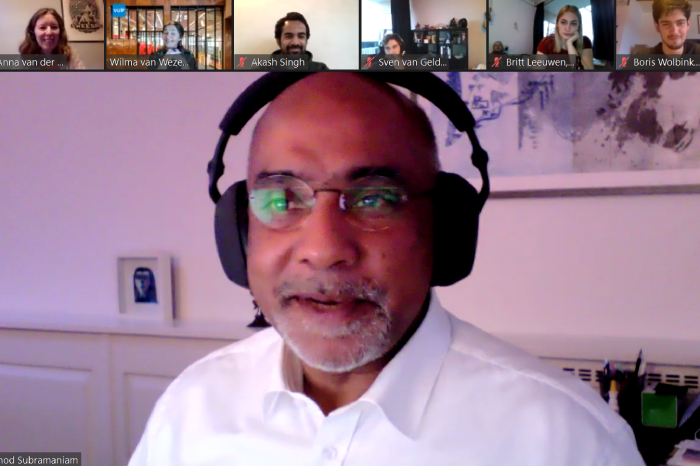 After the bingo wrapped up, there was a Zoom session with some representatives of the student organisations, some people of Student Affairs and Subramaniam and Marcel Nollen of the executive board. Cat, by the way, said that Nollen, who manages the financial affairs, amongst other things, refers to himself as the VU's ATM, but I have never heard him do so. Nollen was asked to say something about the VU's building activities. He clearly didn't really feel like it, said something about the VU campus getting overcrowded despite the VU "building like crazy", because of the exploding student population and the possible necessity to hire some accomodations elsewhere on the Zuidas. Then his face opened and he said: "But why so serious? This is the first time in my life I played bingo and I really had so much fun!" That was endearing.

Student council member Kimberley den Ouden talked about a plan she had made and submitted for a students well-being desk (have to ask her about that later) and then Subramaniam started to talk about food. He asked everyone present what their favorite cuisine was (a lot of people prefer Indian, one student said rode kool stamppot, which piqued Subramaniam's curiousity) and the rector suggested a pot luck dinner (where everybody brings a home made dish) should be organised as soon as the corona thing is over. Seemingly he expected student council member Kat Baron (who hails from Germany) to bring Bratwurst, a German specialty he said he missed very much (Subramaniam has lived in Germany for a while), but Rakić sneered: "Kat is a vegetarian, so no Bratwurst for you!"