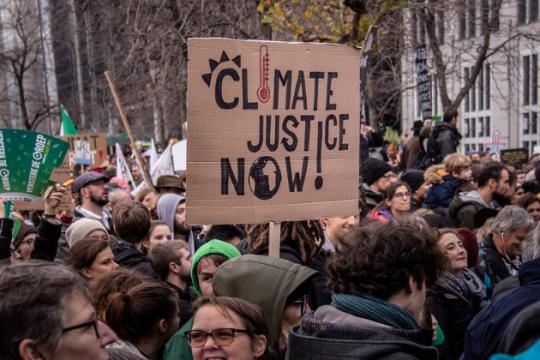 Under the umbrella of Scientist Rebellion, scientists in over 25 countries are protesting for climate action in the coming week. VU sociologist Paulina Pankowska is one of them. She talks about the protests, civil disobedience and strikes planned in the Netherlands to demand emergency action.

Why are you demonstrating this week?
“Even though scientists have been warning for decades that there is a climate crisis, there has been no adequate response from governments and other bodies to tackle this crisis. That’s why we decided to engage in protest and speak through our actions.”
“This global week of action coincides with the release of the report of the Intergovernmental Panel on Climate Change (IPCC) today. The report focuses on mitigation, or tackling global heating. A version of the report, previously leaked by Scientist Rebellion, stated that mitigation cannot be met through incremental change. With our actions we want to draw attention to the climate emergency and demand the emergency action we really need.”

Scientist Rebellion
From 4-9 April, the global movement Scientist Rebellion organizes a week of actions in over 25 countries, including the Netherlands. There will be a climate march through The Hague and a civil disobedience action on Wednesday 6 April. On Saturday 9 April, the week finishes with a science outreach event in Amsterdam.

Is saving the Earth at all a realistic scenario?
“With the current system and the way things are moving now, I don’t think that it is realistic. That’s why we’re taking action and demanding drastic changes. If we shift to emergency mode, we can still avoid many of the worst consequences and in fact create a more just, healthy and sustainable society. There is still a small but rapidly closing window of opportunity.”

What actions should the Dutch government take?
“Our key message is that governments should really act like this is an emergency. The way the Dutch government reacted to the Covid pandemic was very strong. It enabled all fractions of society to work together, united against the common threat. We need a similar response to the climate and ecological emergency, with the same sense of urgency the government has proven capable of.”
“More specifically, fossil fuels must be phased out as quickly as is physically possible. Any delay in this will lead to more warming and worsened impacts, increasing suffering.”

Why are you joining this action week?
“I started getting increasingly concerned about climate change and biodiversity loss in recent years. I remember thinking a few years back that when I was younger and we went for a drive with my family, after about an hour we had to scrape the windshield as it was covered by insects. That just doesn’t happen anymore, there are barely any insects around. This realization really shook me.”

“While initially I focused on individual-level change (flying less, eating plant-based etc.), as I was reading more and realizing how severe the situation is, it became clear to me that individual-level behavioral change alone will not suffice and that a systematic change is needed. That’s when I decided to join the climate movement. It’s also a way for me to channel my frustration, fear and anxiety into something productive. I would encourage other people who fear what’s coming to do the same. It can bring relief, positive energy, and hopefulness.”

‘We have the moral duty to take action’

Can activism and science go hand in hand?
“I’m glad that you’re asking that because tonight we have a panel discussion on this very topic.
Personally, I think that the situation is so extreme and severe that scientists can no longer focus solely on producing research. I also think that as we are the best placed to understand the science, we have the moral duty to take action. We should leverage our status, reputation and connections to make change happen.”

How can VU students and staff join your action?
“Anyone can join our march in The Hague on Wednesday, where will be marching through the center of the city and stopping at the Ministry of Economic Affairs and Climate Policy,  the Ministry of Foreign Affairs, and the Ministry of Finance. The scientists will be wearing lab coats to represent the scientific community, but everyone else is welcome as well.”