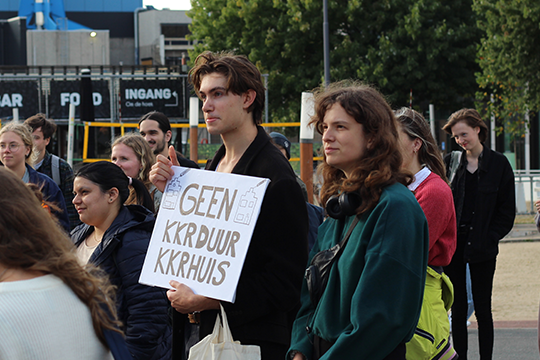 Protesting students without a home were initially very disappointed with the response of VU Amsterdam, but a second protest has been called off for the time being. The students have been given new housing opportunities, although their struggles are far from over.

After the student housing protest on campus, the SRVU Student Union took to Instagram to state that there is no solution yet: “The only options VU offered so far are insufficient, they provide zero improvement on the precarious situation that students are already living in. They are not even better than the options offered before the protest.”

The student union remained active to decry the situation which has students hopping between couches and hostels. In private it organized a new action to demand emergency shelter for all homeless students. Students would show up with sleeping bags to a biweekly gathering of International Office and planned to stay there until a solution was provided. SRVU Vice Chair Pieter van Rossum avoids the word ‘occupation’ to describe the action. “The plan of the protest was to state that this group of students doesn’t have a place to stay and that we should provide them with a solution right away. But the group asking for that is already done. Now there are very few students asking for emergency shelter”, says Van Rossum.

Room at the camping

Due to this development, the new protest action did not materialize. That is partly because the International Office has come up with new places for students to stay. The most affordable of which is a temporary housing opportunity at the Amsterdamse Bos. For € 335, two people can share a room at the camping. Another boon is that students can register here right away, which is important for many things such as getting a part-time job. There are also several opportunities to stay at hostels, albeit they are a bit less affordable and it takes a month to register there. After registration they can also have the tourist tax they paid refunded.

It is doubtful that these locations provide comfortable living circumstances for the average student, but perhaps it suffices as the emergency shelter that the student union demanded. The SRVU student union promises to stay active on the housing issue as long as it persists. “The biggest group of students we are in touch with is now looking for permanent, safe living place. We are working on that now and can collaborate with the International Office.” At the same time, the union is working on communication to ensure that prospective VU students won’t come to Amsterdam without understanding the housing market.

Salma Bel Lahdab, a VU student and one of the initiators of the protest on campus, says the emergency housing being offered now is “definitely not what we were aiming for. We were demanding affordable or free emergency shelter and they are not coming up with that.” She encourages dissatisfied students to mobilize if the situation doesn’t improve. “If the situation doesn’t get better, people should speak up and make noise, because it always pays off.” She thinks the initial protest on campus already had a significant impact on VU Amsterdam and its international office, in part because it reached the national and local press. “They started to feel the sense of urgency, the need to do something.”