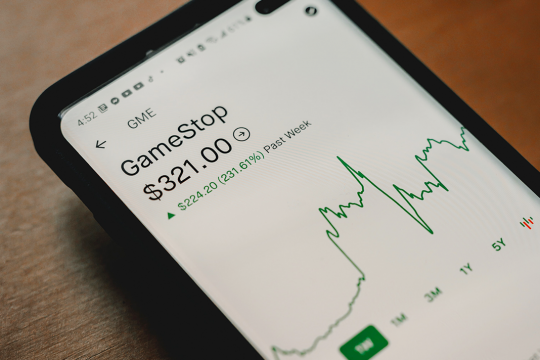 The GameStop phenomenon has spread globally. Several students on our campus have invested in the volatile stock as well.

News stories about GameStop have been trending for weeks. Shares of the game store franchise shot through the roof. Not because of business decisions by the company, but because users of the Reddit group WallStreetBets massively pushed it.

They noticed that investment funds were substantially 'shorting' GameStop shares. This is a way of investing which is only profitable if the value of the stock goes down. It's a risky move, because they lose money if the share price goes up. Unlike with regular investments, they don't just stand to lose what they put in. Rather, their losses can be infinite.

This was an excellent opportunity for people to inflict massive damage upon hedge funds and profit from it at the same time. Hedge fund Melvin Capital seemingly lost billions because of the internet troops who stubbornly kept buying shares and promised not to sell. The share price temporarily increased by more than 1600 percent, although the party may be over by now.

The Reddit group WallStreetBets increased from 1 million members in the start of the year to more than 8 million members in February. It's clear that millions of people are interested in the GameStop hype and that is apparent on the Uilenstede campus as well.

Master Student of Business Administration Ifan (29) from Canada bought twelve GameStop shares for roughly 240 dollars a piece on the first of February. That's a few thousand euros altogether, but not a large sum for an experienced investor as him: "I don’t see it as a real investment, it's more of a gamble. I could lose all that I invested in it and I wouldn’t really flinch."

'I don’t see it as a real investment, it's more of a gamble'

In general Ifan earns a lot through his investments, enough to cover his tuition fees and living expenses. During the coronavirus crisis it's harder for him to get freelance jobs, so his investments are a convenient source of income. He sees his GameStop shares as completely separate from his investment portfolio. “I follow WallStreetBets now on Reddit. Most of the posts are jokes and memes. They post like they’re trolling on 4chan, but the only exception is that they put their money in. I see that as entertainment. It’s funny to be a part of it”, the student explained.

Putting hundreds of thousands into the shares is crazy according to Ifan: "I think people are getting overly enthusiastic about it. I know it’s a very dangerous position". Less than an hour after that remark, Ifan's statement turned out to be correct. The share price of GameStop plummeted. According to Ifan his fellow students are more interested in cryptocurrencies than investments, but that has changed slightly now.

For Ifan it was an opportunistic gamble, but there are other reasons to invest in GameStop. VU Amsterdam student Taylor (23) from the United States bought three shares at the end of January. She only got into investing a few months ago. She sees investing in GameStop as a fun experiment which could potentially be profitable, but it also has a symbolic value: "The company is a symbol to me: a symbol of us normal people changing the game of the stock market forever, and standing up to the billionaires who abuse their power far too often".

At first, Taylor didn't buy the shares to take down hedge funds such as Melvin Capital, but her intentions changed over time: "What began as a potential to make money, but also as an experiment, has become much more about the resentment I feel towards the greed the 1 percent of my country have and the degree of manipulating the public to their benefit. This is my small way of standing up against that, even though realistically Melvin Capital will be just fine in the end."

Taylor thinks it was market manipulation when the investment app Robinhood limited the purchase of GameStop shares. She uses the app herself, as many small investors do. She says the media is complicit as well: "Many major news sources tried very hard to convince the public of things that are simply not true, in benefit of corporate giants like Citadel and Melvin Capital."

'They are taking the time to educate themselves on the inner workings of the economy and the stock market.'

She is glad to see more students becoming interested in investing now: "People are realizing that getting into investing is something very doable, even at our age, and are taking the time to educate themselves on the inner workings of the economy and the stock market." Just like Ifan, Taylor states that people should remember to "only invest in hype-stock if they can afford to lose it all!"

The full names of the students are known to Ad Valvas