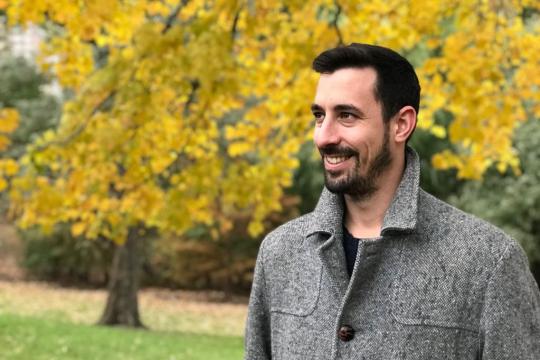 With social media platforms censoring more and more frequently, the question arises whether this happens with a political bias. Communication scientist Andreu Casas Salleras received a 285,000 euro Veni grant to find out.

“It’s concerning that a handful of social media companies play a crucial role in regulating the political debate”, Casas Salleras says. “Also, the conditions under which platforms regulate speech are unclear. That’s why I want to find out whether these companies have a political bias when it comes to suspending accounts.”

Trump and a corps general

The research idea originated from Donald Trump’s presidency, Casas Salleras says. “First, Trump charged the media for going against him, and for bashing conservatives in general. When his Twitter account got suspended, he also went after social media companies.”

Around the same time, the US executed a drone strike on Qassem Soleimani, who was one of the leaders of the Islamic Revolutionary Guard Corps. Casas Salleras: “Soon after that, social media platforms suspended accounts of regular people who supported the assassinated general. Even journalists who reported about the strike were suspended. Both incidents evoked my research interest.”

The power of social media

Casas Salleras stresses why he thinks his research is important. “More and more, people are getting their news from social media, I also hear that from my students. It’s also the place where people learn more about politics, talk about politics, and even organize political protests and movements. So for the political world, social media is becoming more relevant. However, social media companies don’t use a transparent and democratic system for regulating their platforms.”

For his research, Casas Salleras will be studying three platforms: Facebook, Twitter and YouTube. He will study them across four countries: the Netherlands, the USA, Russia, and Iran. “With machine learning, I’ll identify the political ideology of users, among other quantities, and analyze which accounts get banned and why.”

In addition to studying any political biases, Casas Salleras will also study the behavior of people who get banned from a social media platform. “Take the Dutch celebrity Lange Frans for example, who was blocked on Twitter and soon after that started spreading radical ideas on other social media platforms. We think that being banned on one platform might backfire and turn into radical behavior across other platforms.”

Contrary to Trump’s beliefs, Casas Salleras suspects that in the Western world, political ideologies and bans are not necessarily correlated.  However, it might be different in non-Western countries, he explains: “As the largest social media platforms are mostly US-based, they must comply with US laws. And due to international sanctions on Russia and Iran, some people and organizations from these countries are on a US block list. That means social media companies might suspend users who support or praise these people and organizations, and that could result in a political bias.”