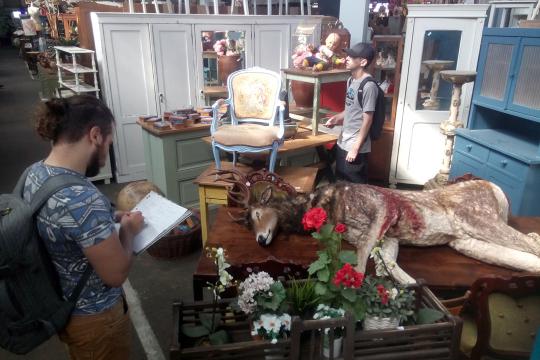 'Be an object in an antique store'

Summer is for experiments. At least, according to anthropology lecturer Younes Saramifar. He wants to teach his students how to forget their own background when doing research as an ethnographer. How? By experimenting in an antique store.

“Find an object and make a story about it”, he tells his group of about twenty students. “Look at its history, form, texture, the setting it’s in, and write a story about it from the perspective of the object. Let the details lead your imagination, not the other way around.”

Saramifar teaches the course Hands-on anthropology & ethnographic storytelling during the VU Summer School. “As an ethnographer you need to be able to write about what you see without including your own story. It’s important to get out of your skin, observe independent of your own mind. That’s why I brought the students here.”

Rows of vintage cupboards, bar stools, industrial lights, old dolls, an occasional stuffed animal, aged school furniture, and much, much more“This is huge”, says Luke Tyhurst from Arkansas in the United States, scanning through Neef Louis. “I have no idea what I’m looking for. I’ll see if there is anything that stands out.” He picks up a worn wooden clog, takes a picture and puts it down again.

A few meters away, Zeno Marino from Italy takes something out of an army green shoulder bag. It’s a large stick. He puts it to his eye, turns and smiles. “I don’t know what this is called in English”, he says. “It’s for seeing around the corner. I might choose this object. It’s hidden nicely, the others may not see it.”

Maggie Appleton from London is taking notes in front of a showcase exhibiting four toasters. She has picked her object. “I really like toasters. Especially this one here, it is prettier than the rest. I’m an illustrator and I draw toasters a lot. They’re a great metaphor for all kinds of things, to help explain topics like how pop-up ads work or to explain fast data processing systems.”

When entering the big hall at Van Dijk en Ko visitors stumble upon a large wounded deer laying on top of a table, with large antlers and blood on its fur. Bernardo Soares from Portugal didn’t hesitate, and picked the deer to write about. “It just calls to me. Maybe because of my veterinarian background. It makes me think of David Lynch movies, a morbid, surreal scene. A door opens to a massive dining hall, people in tuxedos are walking around. They stand around the table with the deer.”

He draws and writes in his notebook. Then he points to the animal. “Initially I thought it was real. But if you look better, you see its nose is plastic, and the antlers are made of foam. But that makes it even more interesting.”

In a corner of the huge hall in Van Dijk en Ko, Carlos Freitas from Brazil is taking picture after picture. “There are so many choices! Look.” He swipes through all the pictures he took so far. “This dead deer really struck me. I have never seen a whole body like this. And they kept it wounded. It makes a good story, from the deer’s perspective.”

'During the year I never bring my students here'More swiping. “These chandeliers would be very expensive in Brazil, even when they’re made from ordinary glass and not crystal." Swipe. "I also liked this bouquet of artificial flowers. They go through time, as opposed to real flowers. That, combined with all the old things here is a good story.”

Lecturer Saramifar is taking pictures of the students and objects. “During the year I never bring my students here. Regular students are interested in getting their degree; summer school students are very motivated for this particular course. Once I gave a workshop creative writing, in my own time, for free, and asked my students to join. Only ten out of thirty students attended. But they did write a better thesis.”

Across the street in Neef Louis, Vittoria van der Hoeven from Australia (“I don’t know if I have Dutch ancestors”), is facetiming with someone while kneeling in front of a mandolin. “I phoned my mom”, she says when she hangs up. “She knows everything about mandolins. But she couldn’t help. There is a stamp on this one I can’t figure out, and someone carved the name Fred in it. I also tried playing it, but it’s really out of tune.”

Luke Tyhurst is still walking around. “I have not decided on the object yet”, he says. “I think it will be something in the other hall. I might choose a microscope, or an old telescope lens. I worked in a lab for a while. If I pick something that’s close to me I can make a better story.”

It’s time to decide. Gathering one by one on the terrace chairs from site café Waargenoegen, the students start to write their object stories. With pen and paper, or typing on a digital notebook. The weather is nice, the view offers piles of vintage goods that don't seem to fit into the two large halls, and the experiment has surely stirred everyone’s brains.