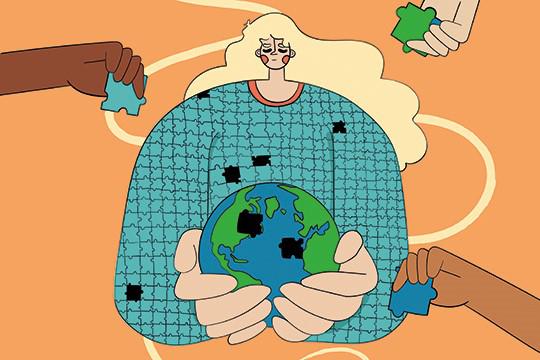 The department of Anthropology has withdrawn two cartoons today that have stirred up controversy. Some employees and people from outside the university saw them as racial stereotypes.

“It’s a white woman portrayed in the form of the guardian and keeper of the world. And people of other races provide the resources.” That is how anthropologist Younes Saramifar sums up his objection to a drawing by cartoonist Honeyhead, one of a series of four illustrations intended to recruit new students to the Department of Anthropology.

Saramifar finds a second drawing in the series problematic as well, in which exotic stereotypes are being gawked at by observers – anthropologists. That image is highly voyeuristic in nature, he believes, which is something any anthropologist should avoid. Moreover, it shows a member of the Padaung people from Myanmar, a woman with her neck extended by a series of metal rings. “Those people have fled to Thailand,” Saramifar says, “where they are oppressed. But because of their value to the tourism industry, they receive money from the Thai government to exhibit themselves. That’s a very painful history, which has no place as superficial stereotyping in an image like this.”

Saramifar emphasizes that the artist, who is still a student, should not be blamed. “She can't help it. We all have blind spots, but professional anthropologists should recognize images of this kind as problematic. These images are supposed to represent the Department of Anthropology. Beside the fact that I as a non-white anthropologist don’t feel represented by them at all, this is about a view of anthropology which is old-fashioned and wrong: studying ‘strange’ people from a distance. Anthropology is a field with a tainted colonial history: anthropologists travelled along the oppressors to investigate how best to exploit population groups for their own gain. And that’s still happening. American troops in Afghanistan had anthropologists with them ‘to win the hearts of the people’ – which really came down to figuring out how best to get locals under control. I can’t view these images as separate from that history. If we really want to move towards new relationships, we need new images which dismantle history.” 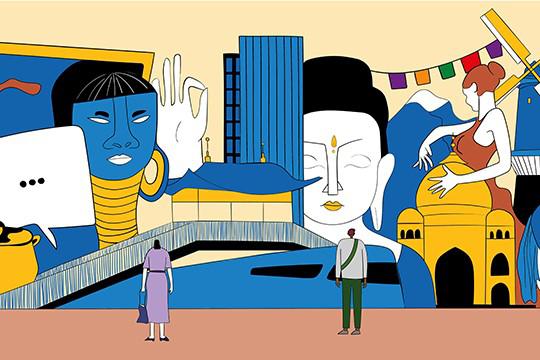 'Does this mean that white girls should not look at the world in wonder anymore?'

But when Saramifar raised his objection to the department management, he was told that the department views the drawings differently. Director of Studies Ellen Bal was one of the people Saramifar corresponded with. “To me it’s a girl looking at the world in wonder,” she wrote. “She is white, yes. Does that mean that white girls should not look at the world in wonder anymore? I recognized our students in the image: many are women and are very engaged in the world – they want to contribute something.”

The drawing of the girl holding the earth raised fierce comments on social media. ‘I find this offensive,’ writes Pooyan Tamimi Arab, Assistant Professor of Religious Studies at Utrecht University on Facebook. ‘These photos are an inaccurate description of how anthropology is today and, more importantly, how it should be as a field,’ writes Adnan Hossain, an anthropologist at VU Amsterdam, also on Facebook.

But it was on Instagram the drawing of the white-girl-earth-keeper stirred up most discussion. ‘You should know better than to post such an image- especially given the racist history in anthropology’, commented Jenn Pielage on the post. ‘A clear sign of white supremacy’, says Milad Bastii. And Diana Mueller ads: ‘To me this image symbolizes a narrow worldview and a major lack of reflexivity.’ In the last few days the post attracted 49 reactions, almost all of them outraged.

That caused the department to decide to withdraw the cartoons this morning. In a statement the department says it wants to make sure the internal discussion about the drawings can be held in a safe way, without disturbance by outsiders through social media.

Door Freek Colombijn op 09 June 2021
The anthropology department is having a discussion about two drawings used in our campaign to draw more students. The Dutch version of Ad Valvas (4 June) gives several views on the drawings. Why do we get in this English article of 9 June only voices of people who are outraged by the drawings and not alternative views? And another question: why do English readers of Ad Valvas get other things to read than Dutch readers (Antropologie haalt omstreden tekeningen van Instagram, Ad Valvas 9 juni 2021)? I refer those readers who would like to get an idea of both views to the Dutch Ad Valvas (https://www.advalvas.vu.nl/nieuws/antropologie-gebruikt-omstreden-cartoons-wervingscampagne ). Freek Colombijn, Head of Department of Social and Cultural Anthropology
Door Welmoed Visser op 09 June 2021

The English article is a combination of two Dutch articles, since the new developments regarding the drawings (ie their withdrawal) were faster than our translation of the first article.

With the withdrawal of the drawings by the department it was necessary to show in the article above  how this had happened. Therefore I summarized the discussion and used the relevant quotes.

For the reporting of this topic it was relevant that non-white anthropologists (and others) had an issue with the drawings and characterized them as racial stereotypes.

The fact that other VU employees(coming from a different background) see no harm in the drawings is interesting, but it doesn’t solve the addressed issue or make any difference for the people who experience the stereotyping as painful. Therefore I chose to leave them out in the English version of the news article.