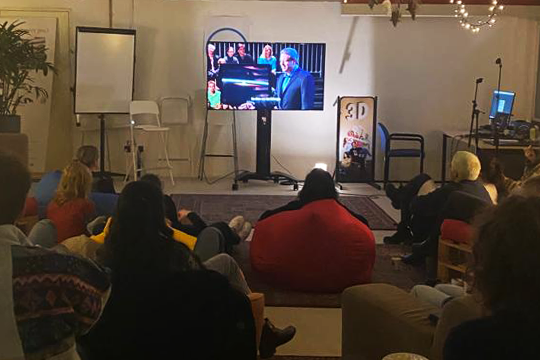 The 3D space on campus has begun screening monthly films, offering anthropologically relevant films and engaging panel discussions. The film ‘Les Hommes Libres’ will be screened on 17 March at 18:00.

The concept of the Anthrocine Filmclub is not new, as monthly screenings already started in 2019, but Covid put a wrench in the works. There were attempts to do the screenings online, “but that didn’t really work”, says Eva van Roekel, assistant professor at the department of Social and Cultural Anthropology. She co-initiated the project with student Salma Bel Lahdab.

The upcoming film ‘Les Hommes Libres’ is about an Algerian immigrant who befriends a Jewish man and joins the Parisian resistance during World War II. It was selected by NEWConnective, in part because of its relevance when it comes to crossing boundaries in a time of polarisation.  The screening is accompanied by a panel discussion. “The discussion is very homey, informal and not static”, says van Roekel.

Despite being rooted in anthropology, the movie nights are open to everyone. “So if students or staff are interested, they are more than welcome”, emphasizes Van Roekel. She is interested in working together with other departments to include experts from different fields during the discussions.

The movie nights are free and up to 24 people can join. To sign up, simply enter your name in the Google Doc.