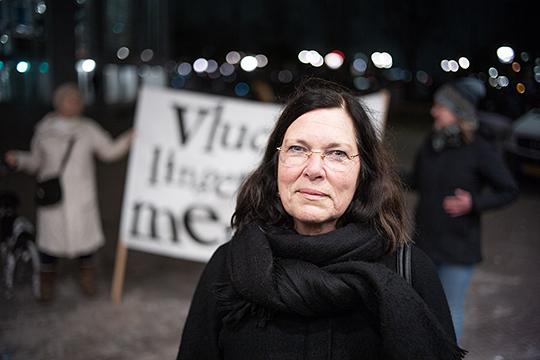 ‘Refugees are people, not things’

Whatever the weather, Loes Mulders, staff member at Vrije Universiteit Amsterdam spends an hour every month standing outside Amsterdam City Hall. Her aim is to draw attention to the inhumane treatment of refugees.
BY Daphne Damiaans PICTURE Peter Valckx

Everyone’s seen the pictures of refugee camps featured on the news. What made you decide to take action?
“A friend of mine, who I used to work with at Amnesty International, told me of her plans to organise a monthly wake. I knew immediately that I wanted to be part of it. At Amnesty, she was responsible for the Maghreb region (the north-western part of Africa, Ed.) and we always talk a lot about the refugee crisis. I was there at the very first wake and it’s been in my diary ever since, so that I can never forget about it.”

Wake Amsterdam With their monthly wake, Loes Mulders and the other demonstrators aim to show that there is always a lot of support in Amsterdam for providing sanctuary and a new life for asylum seekers. Want to join the wake? You can take part every third Thursday of the month at the entrance to the City Hall on the Amstel side. More info sosmoria.eu/wake/amsterdam

Why does this topic matter so much to you?
“What’s happening at the moment on the Belarusian border, in the Moria refugee camp on Lesbos and elsewhere is inhuman. These are people, but they’re being treated like things. People don’t become refugees just for the sake of it and you don’t abandon your home for no good reason. It’s an issue that society and politics needs to take much more seriously. At the wake, I hear the stories the refugees tell and they really get to me. It’s beyond belief.”

What is a wake actually like?
“We always start at 6.00 PM with a briefing on the programme for that day and an update on the latest refugee news. Every wake has a specific theme – tonight, it’s about charity, Christian values and a humane asylum policy. There are speakers, including refugees who tell their personal stories, with musical performances in between. That’s great, because it gives you the chance to come to terms with what you heard. At 7.00 PM, we pack up again. Currently, there are always around 30 people at the wake and we’re hoping to see that number increase. The more people there, the better.”

What do you hope to achieve?
“Our main aim is to focus attention on the incredible suffering being inflicted on refugees in Europe. We’d also like to see Amsterdam take the lead on this. Even in Dutch politics, people are adopting a tougher stance on this theme. It would be great to see the City of Amsterdam make its voice heard and also let it be known to the House of Representatives and then Europe that things really need to change.”

Do you ever think: I’m going to get on a plane and help these people?
“I really admire people who do that. People who put everything aside and head off to Lesbos, for example. Especially when you hear that some aid workers are now in the Greek courts on suspicion of human trafficking. That's the world turned upside down. But I don’t consider it to be my place to go there and prefer to stay here in Amsterdam and fight for a more humane policy. Perhaps, in a few years’ time, when I retire, I’ll be able to take in refugees at home.”

Have you always been so socially engaged?
“As programme manager for the Pre-University College, I deal with equal opportunities for school students on a daily basis. It’s our job to ensure that the transition from secondary to academic education runs smoothly. We work a lot with first-generation students, and have special programmes for them. I want to ensure that they make the right choices and get to know people who can help them at university. In other words: I’d say that I probably am quite socially engaged.”

06-04-2022
VU Amsterdam and other universities ask for financial support to help refugees
28-02-2022
‘Give refugee researchers greater security’
28-02-2022
Russian invasion of Ukraine also causes shock wave on campuses
11-06-2021
One in every ten female students has been raped during her studies
20-07-2020
Foundation for Refugee Students UAF is pleased: more refugees obtain diplomas
27-07-2017
Refugees tell their stories during Amsterdam Summer School