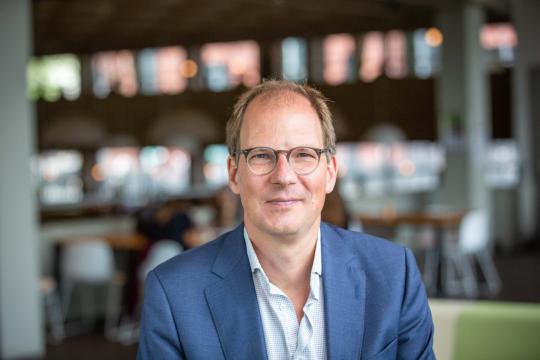 The Russian troops invading Ukraine yesterday marked the start of the feared war between neighboring countries Russia and Ukraine. Professor of International Security Wolfgang Wagner shares his take on the worrying situation. “I did not expect Putin to go this far”, he says.

Many of his colleagues were also surprised, Wagner says. “I was honestly really shocked. That Putin would invade Ukraine from multiple sides, few people saw that coming.”

What Wagner finds remarkable is how little attention Putin pays to the legitimization of today's invasion. “He talked about denazification and demilitarization of Ukraine, but that is such a weak rationale for starting a war. It’s sheer power politics.”

In recent weeks, the term World War III has been coming up more frequently. But how likely is a world war? “I don't think the probability is high, but of course even a small chance is worrisome. The worst-case scenario is that the military conflict spreads to the Baltic states, meaning Russia also invades Estonia, Latvia and Lithuania. NATO is then obliged to defend these countries, resulting in a confrontation between Russia and NATO. That has the potential to escalate very rapidly...”

So far, European leaders stick to political and economic sanctions. Wagner does not think the sanctions can stop Russia's invasion, but he believes they are important. “With the sanctions, NATO is showing other countries that violating international commitments can result in great harm. For example, I think China is closely watching how the West responds to this invasion. NATO's action could set a precedent for a military attack on Taiwan. So it’s an important signal to China, among others, to show that there are consequences for similar actions."

Implications for the Netherlands

So far, the Netherlands has sent weapons to Ukraine, and two Dutch F-35s flew into NATO's eastern airspace yesterday. Will it stop there? “If Putin does not invade the Baltic States and the war is limited to Ukraine, not much will change for the Netherlands militarily.”

On the other hand, the sanctions will also be painful for the Netherlands. “Especially if Russia strikes back with their own sanctions, which is to be expected. Think of a reduced gas supply from Russia to Germany. That will lead to the Netherlands supplying more natural gas to Germany, which has already been laid down in contracts. Or in other words: more gas production in Groningen, a northern province in the Netherlands.”

For the time being, Wagner does not expect many refugees to enter the Netherlands. “I think a lot of Ukrainian refugees will be seeking shelter in the neighboring countries of Ukraine. Poland is normally reluctant to provide shelter to refugees, but now I think there is a sense of solidarity. But it does depend on how many refugees there will be. If that heads towards 1 or 2 million, then we are definitely going to see that back in the Netherlands.”