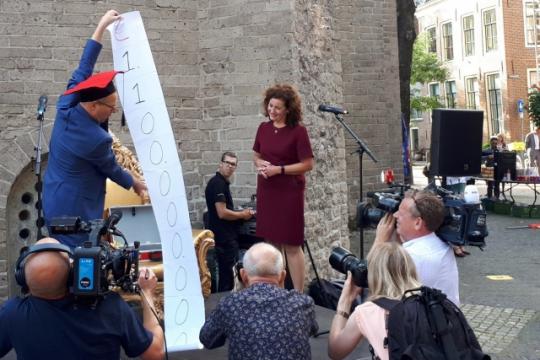 Protesters ask: where is the 1.1 billion needed for higher education?

In her address at the opening of the academic year, outgoing minister Ingrid van Engelshoven took extra time to reflect on the coronavirus crisis. But she couldn’t please the protesters: for the time being there won’t be any extra money.

In many universities in the Netherlands, Monday’s speeches marking the opening of the academic year focused on the impact of the coronavirus crisis; according to administrators, it’s a good thing that students will be allowed to return to campus again.

This sentiment was echoed by outgoing minister Ingrid van Engelshoven in the Pieterskerk in Utrecht at the opening of the academic year of the University for Humanistic Studies. “Of the hundreds of students I have spoken to, a large number told me how they lost their sense of rhythm and motivation”, she said. And therefore lecture halls and campus cafés “have to again become places for meeting people and getting inspired”.

Unlike her host, Rector Magnificus Joke van Saane of the University of Humanistic Studies, Van Engelshoven did not address the structural lack of funding in higher education, even though it is something that she has acknowledged. She only said: “Sometimes I think that we have to re-learn how to share resources.” But this was in reference to society as a whole, and not about something as specific as the basic student grant or university funding.

After her speech, Van Engelshoven walked to the square behind the Pieterskerk where the General Union of Education (AOb) and FNV trade unions, the protest group WOinActie and the Dutch Student Union were holding the “real opening” of the academic year for the third year in a row. About a hundred students and faculty were in attendance.

On the podium, Professor Rens Bod of the University of Amsterdam presented an ‘alternative budget’ on behalf of WOinActie. This turned out to be nothing more than one long scroll of taped-together sheets of paper that said “€1.100.000.000” – the amount that higher education should be getting as its annual funding increase. Recent research carried out at the direction of the House of Representatives has reconfirmed this amount.

According to Bod, this isn’t really extra funding but money that university faculty have not been paid for years. He added that about the same amount (“actually 1.7 billion euros”) is required to give students back their student grants. “Students and faculty have joined forces and we’re not going to let anyone come between us.”

Van Engelshoven didn’t have any good news for her critics. She agrees that universities need more support and that more faculty and researchers deserve full-time contracts. But on Prince’s Day, when the government announces its budget, the D66 minister won’t be pulling an extra billion euros out of her hat. A decision about so much extra money is not one that an outgoing cabinet can take, she explained once again. She had nothing to say about the system of student loans.

It wasn’t only the minister who was lambasted during the protest, university administrators and executive boards were also targeted. Although they support the call for more funding, in the meantime they aren’t giving nearly enough employees a permanent contract. The campaign group Casual Leiden, who are disappointed about the most recent university collective agreement, proposed that if the situation doesn’t improve before Christmas they should be ready to take real strike action. The plan was met with applause, and FNV union director Jan Boersma offered support, also on behalf of his colleagues at the AOb.

Certain universities (which happened not to be present) were given “Penny-Pincher Awards”, for example for having the most PhD scholarship students (University of Groningen), the most expensive executive board (Maastricht University), and the lowest number of women on staff (Delft University of Technology). The university with the most temporary contract faculty? It depends how you calculate this number, but Utrecht, Rotterdam and Leiden all rank poorly in this area.

To conclude the protest, campaign group 0.7 called on all faculty and researchers to be made accountable. Particularly those with permanent contracts must stand up for their colleagues in dependent, precarious positions, and should be doing much more to fight abuses of power. “Be critical!”, was their call to action.

After the event, when asked, Rens Bod called it gratuitous of the minister to pass the buck to the new cabinet instead of taking responsibility herself. “We’ve been waiting for four years for sufficient funding and the minister can’t hide behind the old coalition agreement anymore, because that government has resigned. She should now say: this is a dire situation, we’re making it a priority and we’ll be making structural investments in higher education come the third Tuesday of September.

And while Van Engelshoven has acknowledged many of WOinActie’s demands, that still leaves wide open the question of what will actually be done, he feels. “I want to see it first. Unfortunately, we’re just going to have to keep fighting. This is not enough.”