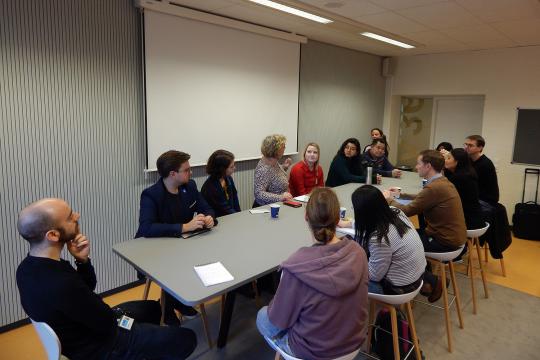 Curiously, an 8 is the highest you can get

Do not grade higher than an 8, is said to new international lecturers. It's one of the things internationals, lecturers and students alike, struggle with at the Vrije Universiteit. They talk about it at a debate about international careers.

Students can argue for a higher grade, resit a course and exam, and choose not to go to a lecture. “It’s lenient here”, says a British student about the VU. “I actually find it quite strict here”, responds an Italian lecturer. “At my first day I received formal guidance about the grading, and they made it very explicit that a 10 doesn’t exist here. In Italy we use the full range of the scale.”

Jump off a bridge

About a dozen international students and lecturers have gathered around the table in the global room to talk about being an international at the VU. “What struck you the most?” is the main question, asked by Reyka Lycklama à Nijeholt, policy advisor internationalization.

In the UK it’s far less common to fail a courseThe grading system is the hottest topic. “When a student from Princeton gets a 9 instead of a 10, he or she will jump off a bridge”, says an American lecturer. “There should be a fair comparison for students who study here. It’s a challenge to translate your grade from the VU to a future employer.” The others agree.

“In the UK it’s also far less common to fail a course. In my course here thirty percent of the students failed, and that was just that”, says the British student. An American student adds: “In the US if you fail a class or don’t get an A, it’s horrible. Here there’s always the option to resit.”

An Australian lecturer was very amazed at this. “Once a student enrolled in my class after it had finished. He said he was coming to the resit and wanted to do the assignment. I refused, he appealed, and the exam committee told me I had to let him attend the exam. He passed, even though he never attended a course.”

But it's not just the grading system that is bothering the internationals. They are also discontent with the short periods, and the short break in between. “It’s a very tight schedule across seven weeks”, says the Italian lecturer. “I am used to courses lasting three months up to a year, in which you can do more than just touch on the main topics. Here at the VU, after just a few weeks there’s the exam, then everyone disappears, and you hope they’ve learned something.”

It’s very intense until Christmas, very overwhelming“There’s also no break in the year. The only quite long break is with Christmas”, complains a lecturer from the Netherlands. The students nod. “The time schedule is really tight”, says the Chinese student. “We have exams every week, and every exam counts for twenty percent of the total grade.” The American student adds: “You’re still working on the paper for your last course when the new period starts. It’s very intense until Christmas, very overwhelming.”

Back to high school

Some remarks are also plain positive. The Chinese student is very happy with the flexibility at the VU. “I first studied teacher education in English, because me and my family thought that would be a good occupation for me. But I realized I wanted more science and technology. Here I could switch as long as I met the extra requirements. Back in China I would have to go back to high school to be able to change programmes.”

“There is certainly room for improvement”, concludes Lycklama à Nijeholt after two hours. A sheet explaining the grading system, or advice on how to mix Dutch and international students in your class are probably among the easiest improvements. But you never know, we might even get longer period breaks if the internationals keep coming.