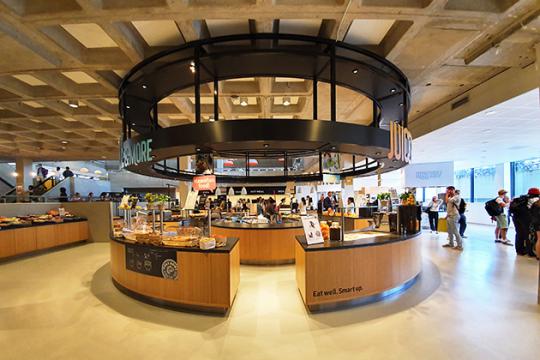 Vegans feel forced to bring their own lunch

comments 1
Despite the university’s ambitious plans for a sustainable future, there is still little vegan food available in the campus restaurants. Caterer Eurest claims it can supply 100% vegetarian catering and various vegan options on request. So why isn’t it?
BY Bryce Benda PICTURE Bryce Benda

When computer scientist and vegan Aart Stuurman strolls through the Foodplaza in the Main Building, he sees almost nothing he can eat. It’s disappointing, he says. “VU Amsterdam considers itself to be a green university. It recently implemented a new rule that staff members can only fly on business trips once every two years. That’s an excellent policy of course, but it’s a pity this green ambition is not reflected in the canteens.”

Vega(n) week As part of the sustainability week, caterer Eurest is organizing a vega(n) week in the restaurant of the Hoofdgebouw. From 10 to 14 October, all meals at Foodplaza are vegetarian or vegan.

Stuurman thought the build-your-own poke bowl was a good vegan option, but according to him it had been suddenly taken off the menu. When we asked in the VU Amsterdam restaurants, they said it is still possible to order a vegan poke bowl (you get a big portion for €5.95). But apart from that, Stuurman and his vegan colleagues see few options for them in the restaurants, so they just bring their own food to work. “I sometimes prepare an extra meal at home, but that takes time. I still occasionally check what’s available in the canteen, but I always bring my own bread with hummus spread along just in case. Only you get tired of eating that all the time.”

The biggest problem for Stuurman is that he is never sure which options on the menu are vegan. “I recently asked if a wrap was vegan, and the employee said it was, but when I went to eat it I found it had cheese in it. It would really help if they listed the ingredients of the meals – and that would benefit people with allergies too. And it would be great to have one vegan meal a day that is clearly recognisable as the vegan option.’’

The picture Stuurman paints is not entirely accurate, according to Machteld Holtkamp. She is caterer Eurest’s branch manager at VU Amsterdam and talks about their range of meals. “We offer five different sandwiches every day, one of which is always vegan. If they run out, we can always make a vegan sandwich to order. We also regularly sell vegan wraps, for which we use vegan cheese and other vegan ingredients. We can make wraps to order too. If in doubt, customers should ask for the manager, and myself or a colleague will come and help.” Holtkamp says they also serve vegan dairy alternatives and vegan brownies and biscuits.

‘Tempeh is not vegan’

Holtkamp recognises that not all her employees know which meals are vegan. “Our permanent staff know what’s what, but in the current tight market we regularly have to hire temps, who sometimes don’t know what options are vegan. So again: when in doubt, ask the manager.” That staff are not always up to speed becomes evident when a staff member at the Wraps bar is asked for advice. The employee in question claims that tempeh is not vegan, while the fermented soybean product is actually a perfect and nutritious meat alternative for vegetarians and vegans.

So while caterer Eurest claims to support the goals of ‘sustainability’ and ‘climate neutrality’ on its website, it doesn’t always appear to hold up in practice. But Holtkamp says that Eurest delivers what the university asks of them. “VU Amsterdam is our client, and we do what the client asks. We could supply 100% vegetarian catering with various vegan options starting from tomorrow if requested, but that’s for the board of the university to decide.”

Interestingly, the VU Amsterdam website lists ambitious and concrete goals. For example, the university ‘aims to offer a 100% vegetarian and as vegan as possible menu by 2025.’ But why wait until 2025, if Eurest can meet that target today? “Let me start by saying that I agree with Aart”, says Ivar Maas, Lead Sustainability at VU Amsterdam. “I myself eat mainly vegan and otherwise vegetarian, and in the canteen I also often have to wonder: what can I eat? That’s irritating. On the other hand, there is the question of how quickly you can go green. For example, you want enough people to support your plans, and you have existing contractual obligations.”

According to Maas, it is made more difficult by the fact that the discussion about food is so often polarised. “I also notice this in the discussions we have within the team. It’s tricky, because you want your policy to take everyone’s wishes into account. At the same time, I completely agree that we need to become more sustainable, and quickly. Our strategic goal is to meet that target as soon as possible, but with the cooperation of all parties.”

VU Amsterdam spokesperson Frauke van Goethem responds in writing: ‘The current catering product range is 65% vegetarian, but simply increasing this percentage will not be enough. For example, cheese has a larger carbon footprint than chicken. Our ambition is to make our restaurants 100% planet proof.’

‘Cheese has a larger carbon footprint than chicken’

Van Goethem mentions the international EAT-Lancet Commission, which does extensive research on planet-friendly food. ‘It will not be enough to simply make the current menu completely vegetarian. We need to carefully balance our options. This is not only because they concern choices for the long term, but also because we must take into account the fact that we are a diverse university with a wide range of target groups.’ She cites the protein transition from animal to vegetable as an important step in this process. ‘We will increasingly need to consider the longer term impact of our choices on the planet.’

The words of Van Goethem and Maas reveal the university’s struggle: to be as sustainable as possible while keeping all the different target groups happy. The question is whether the two goals can be completely compatible, and whether we have the time to wait until enough people support the transition. Recently, concerned scientists in the Netherlands (including from VU Amsterdam) protested against the policies of the government and institutions, which they say are much too passive.

Fortunately, things are looking up for vegans. Later this year, a Vegan Grab & Go Cafe will open in the W&N Building. “You will be able to get coffee, sweets, chocolate and sandwiches there”, says Holtkamp. “Vegans will be spoilt for choice, because it’s all animal and dairy free.”

But what about the canteen in the Main Building; could they make it more vegan-friendly? “Our vegetarian and vegan sandwiches are always clearly identified with signs”, replies Holtkamp. “We try to do this for all our products and meals, but I agree we need to do better.”

Door Baoqingfeng op 26 January 2023
Dear Green Fascists I’m glad to hear the message about “Meat-free by 2025” of VU canteen just as when I heard the third world war is braked out. This decision is a direct mental rape towards us, the people who want to have a normal diet. It is impossible to understand the motive of making that decision except thinking from the perspective of mad person, especially the specific kind of mad person who burn the Reichstag Berlin and claimed that communists did it. I demonstrate with all my fierce anger and directly ask you to stop the idiot behavior of dictating the green terror to us, the innocent people who just want to keep a balance diet and impose the Vegetarians dictatorship among the whole campus! I sincerely hope that you guys, the people who sacrifice the rights of the majority for pleasing the minority shall nail on the cross as the victim of the tyranny of the majority. Worst wishes Go to the hell