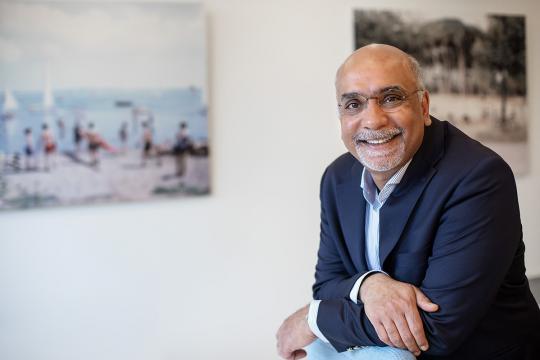 ‘Twente’s not the ends of the earth’

Rector Magnificus Vinod Subramaniam is leaving VU Amsterdam to become university president at Twente. ‘As an administrator, you can’t just impose your own values from above.’
BY Peter Breedveld PICTURE Yvonne Compier

Vinod Subramaniam has no plans to move to the Twente region, where he takes up a new position as president of the Executive Board at the University of Twente in September. “My wife and child are settled here in Amsterdam. My child doesn’t want to leave her school, so...” But nor does he want to commute back and forth every day. “I’m considering buying a pied-à-terre. I imagine myself going to Twente on Monday and staying there for a few nights. We’ve seen during corona that all kinds of things are possible with online meetings and the like. It’s not the ends of the earth, Twente, is it? Everyone here seems to think so, but from Amsterdam you can be there in an hour and three-quarters. That’s the time it takes to get from one side of Chennai or New Delhi to the other.”

Subramaniam was raised in New Delhi. “That’s a city of about 25 million people. Since then, I’ve always lived in relatively small cities. In Ithaca, a town of 30,000 people in New York State, and Göttingen is also tiny. Amsterdam is a fantastic city, you know; there’s lots to do, but compared with New Delhi it’s a village.

Subramaniam has travelled all over the world. He studied electrical engineering in Ithaca, obtained his doctorate in Michigan and then worked in Germany and the United Kingdom for pharmaceutical company AstraZeneca. After that he was made a professor at Twente. “I had no idea where in the country I’d end up. As a postdoc I’d worked with people from Twente, I knew that the university had a fantastic lab, but I didn’t know the system – how things work here in the Netherlands.”

Now, though, he is part of that system himself. He has held an endowed chair at Radboud University Nijmegen, been scientific director of Twente’s Institute for Biomedical Technology and Technical Medicine and then became scientific director of atomic and molecular physics research institute AMOLF. In 2015 he was appointed rector magnificus at VU Amsterdam. “I didn’t have much management experience back then. I’d been a director of two institutes, but not a general university. VU Amsterdam showed courage bringing in someone from outside. Also, because I’m not part of the university’s tradition, not a Calvinist Protestant, and didn’t grow up at VU Amsterdam.”

Now he is leaving again, back to where his career in the Netherlands first began. “It has to happen at some point. Two years from now it would have happened anyway, when my second term ended. And a change of the guard is good for people and good for the institution.” ‘I’m the type of person who walks around a bit, talks to people, listens to what their needs are’

He could have become rector of another university, of course, a position which seems to suit him well. “But where’s the challenge for me in that? I want to learn new things, to try everything and learn from it. To start a new adventure. And whilst the role of president may have been more formal in the past, more managerial than the rector’s, I don’t very much care about that. I’m the type of person who walks around a bit, talks to people, listens to what their needs are. I did that here at VU Amsterdam and I’ll be doing the same at Twente. The one thing you have to be sure of is that you don’t tread on your colleagues’ toes, but you can reach agreements about that. It doesn’t have to mean that you’re not involved directly with people."

Eight years away from science

Still, this is yet another management position even though Subramaniam is a scientist at heart – and a good one at that. Does he never want to go back into research? “I’m very realistic, I’ve been out of science for about eight years. That means that you can’t just pick up where you left off. I could start a lab, yes, but boxing in the top weight category is just no longer possible."

Subramaniam says that was a step he took consciously eight years ago. “Somewhat reluctantly, to be sure, but at the time I saw it as an opportunity to create an environment in which others could achieve excellence, or contribute towards it. That’s been a real treat for me, all those scientists doing such wonderful things – that you’re able to facilitate that is fantastic. Also, the fact that I, who trained as an electrical engineer, now come into contact with the whole spectrum of academia. The humanities, law, social sciences: that has been a fantastic learning experience for me.”

‘Whatever your goal, above all enjoy the journey there’

From the cupboard behind him, Subramaniam picks up a printed sheet which turns out to be a poem. “This was given to me by Dorret Boomsma [Professor of Biological Psychology at VU Amsterdam, world famous for her research on twins – PB]. It’s the poem Ithaka by the Greek poet C. P. Cavafy, translated by Boomsma’s daughter. I’d learnt it before, in the English translation. I often quote these lines: As you set out for Ithaka / hope your road is a long one / full of adventure, full of discovery.” It is how he sees his own career, as a voyage of discovery. “That’s what I always tell my students: whatever your goal, above all enjoy the journey there!”

Those students, Subramaniam is exuberant about them. “We’re only here by the grace of students, I think they’re fantastic. They’re creative, full of ideas – they give me new energy every day. That’s why I seek them out. As an organization, you’re often tempted to say: we know how things should be done and we’re going to do them this way and that. But as a manager you have to play a subservient role. Students come up with great ideas, so I love listening to them.”

‘Students give me new energy every day –I think they're fantastic’

He has also always been there for the academics, he says. “I’ve tried to engage with the material, to show an interest, to connect the right people. I‘ve involved myself with applications for research grants and conducted trial interviews with the applicants. As a board we’ve taken measures to lighten workloads, although often we’re restricted by policy in The Hague. But at least we’ve always been approachable.

“What I misjudged at the beginning was that, coming from Twente, I couldn’t just impose my own system of values from above. I wanted to abolish the pyramid hierarchy system, which particularly disadvantages young scientists. But every discipline here is different, which makes things very interesting but also insanely complex. It takes time to understand that, and patience to change things. But things have changed. The right to confer doctorates is being broadened, so that not only professors but also other senior academics with a doctorate of their own are allowed to supervise PhD students. Here at VU Amsterdam, we also have a team of change-minded deans. A lot of movement is coming from the bottom up – from groups like the Amsterdam Young Academy, for example, where young people are making their voices heard. These are acting as catalysts for change, which is very important.”

VU Amsterdam will not have to live entirely without Vinod Subramaniam in the coming years, however. “I’m about to say goodbye to a great place where I’ve really enjoyed serving the community,” he tells us in an e-mail a few days after our interview. “But fortunately, I’ll still retain some links with VU Amsterdam even after 1 September, because of its increasing co-operation with the University of Twente.”