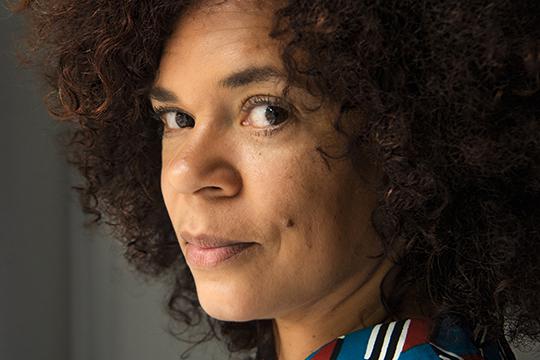 ‘I have learned how not to belong’

Writer in Residence Babs Gons recognised a recurring theme in her conversations with students: belonging, being yourself, and feeling at home. Did VU Amsterdam make her feel at home? A look back at the past year.
BY Emma Sprangers PICTURE Angela Tellier

The theme of the Déjà VU Festival is belonging. What does that mean for you?
“It’s about finding a place where you can connect with others without sacrificing yourself. That there is a place where you can feel good, but above all can feel love for yourself. It is okay to feel uncomfortable sometimes, because if you are not challenged, you cannot grow. It is not the same as feeling at home, but it does touch on it: belonging, and allowing yourself to belong. It is very much a personal thing, that feeling of belonging. And language plays an important role too. If you deconstruct the word: be - in longing - of ...there is a sense of longing in it.”

Did you feel at home here yourself during your time as Writer in Residence?
“Gosh. Hmm... I never really had a fixed place here, so it sometimes felt a bit fragmented. But I have always been a bit of a loner. By that I don’t mean a sad outsider, because I am also very social and can get on well in groups. But what I did find difficult is that I always want to be like those around me. So while I’m not a student anymore, I felt like one when I was here, whereas maybe I fit in better with the teaching staff. That made me think: What am I really?”

In your poem Polyglot, you write how you have taught yourself language after language: ‘the one of the decent clothes/that makes up somewhat for your skin [...] the language of the head held high and the straight back/and pretending.’ Do you feel that you have often had to adapt yourself to fit in?
“Yes, absolutely. That poem is also very much about code switching. I think everyone has to deal with this to a lesser or greater extent: being judged based on certain characteristics. Maybe less so if you are privileged enough; I don’t know. These are conscious but sometimes also unconscious mechanisms. For example, that you know you will be taken more seriously if you adopt a slightly posher accent. I sometimes catch myself using a different profile picture when I have a business meeting. I suppose that’s how you manoeuvre through life.”

In the literary world, all the prominent positions still seem to be dominated by white men. What is it like for a woman of colour to try to find her place in this world?
“I am actually fine right now in a place that I have created together with a number of other people. I do unconventional work that for a long time was not even allowed to be called literature. In that sense, I have learned how not to belong. The literary landscape is complicated and not always entirely welcoming to people who come from a different background. It’s a peculiar world, but I won’t go into all the politics of it here.”

In 2018, you won a Black Achievement Award for your contribution to art and culture. Don’t such awards encourage the exclusion of people of colour from ‘regular’ awards like the Nobel prizes?
“No, it’s a reaction to this exclusion. Prizes like this have been called into life because it was realised that many people are excluded from other prizes, either because they are simply not in the picture, or because their work is not yet recognised by the traditional art and culture institutions. If you see the kinds of people who get those new awards... they have huge bodies of work, but they are not recognised by the white establishment. It’s just like the BET Awards [Black Entertainment Awards, ed.] in America, which exist because Black artists were excluded.”

At the Grammys, they distinguish between best album, artist and song on the one hand and best urban album, urban artist and urban song on the other. The criticism is that often only Black artists are put in the urban category, while white artists go home with the regular awards.
“Yet this does call attention to these artists, and that’s important. It is also about increasing visibility, and what these people mean within a particular community.”

Does it annoy you when people ask you about being a woman and a woman of colour, as if those are the main pillars of your identity?
“I usually just incorporate that into my work. I am sometimes invited to shows to talk about those themes, but then I think: my medium is spoken-word poetry, i.e. polished texts; that’s what I do best. Interviews are quite hard for me, and I notice that people are quick to put me in a box. So yes, I do find that difficult. Because before I know it, I will be seen as someone who only talks about colour, or what it is like to be a woman. That you become a mouthpiece for a certain group of people; that is not me at all. People often say that I am a politically engaged writer, which baffles my friends: 'Where do they get that idea? You write about things that concern you, but you write just as easily about love, education, Amsterdam, the human body or food.’ But I will always be known as that engaged writer. People quickly define my identity based on my colour and my gender.”

At the start of the academic year, you said you wanted to look for the untold stories. Did you find them?
“It is not really the job of a Writer in Residence, but I really enjoyed just standing in the hall. I would watch how people interacted, where they walked, who talked to who, and who did not. I mainly just observed, including during lectures: who sits where in the lecture room, what dynamic is there. I built up a kind of patchwork of stories that I heard at the various events: the exhibition about decolonisation, the opening of the VU Pride Library. And during the lectures as well: a young man came up to me to tell me he thought very differently to the way I do; that ‘we in Brabant’ do things very differently, but that he thought it was interesting to hear what I had to say. And I thought: how wonderful that such a person at a university can come into contact with someone who is so different from him, and vice versa. It is just as interesting for me as it is for him. The contact with the students really made an impression on me.”

What did you learn about the students? What is important to them?
“I think this generation has been saddled with much bigger problems, which have all been compounded by the pandemic. It is always easy to say that one generation has it worse than the ones that came before it.. After all, previous generations had to deal with things like economic crises, syphilis and the Spanish flu. But I never gave the climate a single thought when I was a student – we just threw our cigarette butts on the street. I don’t remember mental resilience being an issue in my time. Loneliness was also much more stigmatised; it is no longer such a taboo. People today talk much more about inappropriate behaviour, white male privilege, gender freedom and decolonisation. This generation is not only concerned with how they themselves can belong, but with how others can belong too. They are more aware of each other. This does leave us with the question: where do all those people belong?”

What wisdom would you like to share with the next Writer in Residence?
“Look beyond the curriculum. Look beyond what is expected of you. Put your ear to the ground and listen to what is going on. Sometimes there were many absences from the lectures. Asking about it might reveal that someone was having major difficulties. If you show interest in others, you will hear a lot more. And if you want to organise things, involve the students. Ask them what they would like from you; what you can contribute. And start writing the essay on time, ha ha.”

The essay is a gift of the Writer in Residence to VU Amsterdam and is presented in the form of a booklet, published by VU University Press.