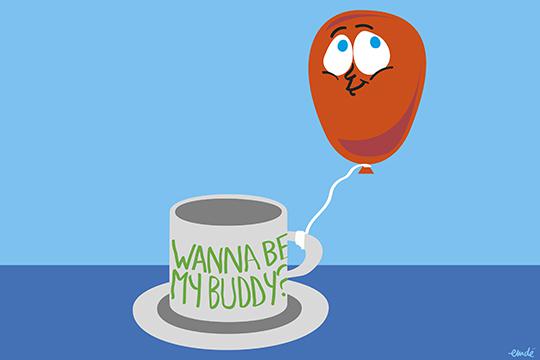 People can tell you to ‘just be yourself’ all they want, but when you’re breaking a cold sweat on a crowded campus square you might want advice that’s a bit more specific.

Friendships are known to have a positive effect on both physical and mental health. Still, there is little research on how friendships are formed, says Erik van Ingen, Director of Studies for VU Amsterdam's sociology programmes. “Those kinds of studies have been done on dating. A partner relationship is also easier to study, because it’s only one. Friendship can be a very broad concept.”

Here’s some comforting news though: as a student, you’re already well on your way to making new friends – without doing anything. According to sociologist Beate Völker, your student days are the perfect time to meet new people. “It’s a period in your life in which all the cards are reshuffled. Ten years later, your life will probably be a lot more settled, with work commitments, a partner and in-laws. While you’re at university, you have all the time in the world to discover what you want and who you want to share your life with – surrounded by hundreds of other people who are also open to new friendships.”

Van Ingen agrees: “The context of a university is helpful for building close relationships. Right from the start, you have a lot in common with the people around you: things like your age, level of education and interests.” After all, people tend to look for friends who are similar to them, says Völker. “It’s a way of validating something in yourself.”

So where do you start? Talking to new people is scary for everyone – for some more so than others. “If you’re uncomfortable or shy, it’s good to just come out and say so”, says Völker. “If you try to pretend that everything’s fine, people may find your behaviour somewhat odd. The person you’re talking to is usually nervous as well, so you can say something like, ‘This is a bit scary for me, but would you like to go for coffee sometime?’”

Try talking to someone outside your bubble

Even though we often – consciously or unconsciously – look for friends who are like us in some way, Völker recommends venturing further afield. “Look for things in others that you find funny, or that inspire you. In a good friendship, you learn things from each other. You enrich each other’s lives. If you’re someone who has difficulty making choices, it can be enjoyable to be around someone who pulls you out of that. It can also be fun to be friends with someone whose politics you disagree with, or someone you can talk to about where you buy your clothes, or about whether or not you eat meat.”

Of course you’ll meet people in class, but joining a student association is also a tried and tested way of making new friends. Besides the general student associations – many of which are not beset by sexist scandals – VU Amsterdam also has its own clubs you can join. There’s VUnited for international students, NewConnective for the philosophically minded, and Life Is Better in 3D, which organises game nights, trips abroad and day trips. And in addition to the regular study associations, there are groups like Family of Academic Minds (FAM), which mainly focuses on first-generation students, VU Pride for the LGBTQIA+ community and the Islamic Student Association ISA.

Get out of the house

There’s no getting around it: if you want to make new friends, you’ll have to leave the comfort of your home every now and then. Van Ingen: “Sometimes just being around the same people on a regular basis is enough to start a friendship. If you’re forced to interact with someone, you’ll eventually start talking about things besides your classes and find out if there’s a click. But you have to put yourself out there. If you scurry home right after class, not much will happen.”

Another piece of advice if you want to make new friends – which you might not want to hear, given the dire housing shortage – is to move out of your parents’ house, especially if you’re not living in Amsterdam yet. You’ll meet roommates and their friends, and it’s easier to go somewhere on a whim if you don’t have to catch the last train home. Van Ingen: “More and more students are still living at home with their parents. But if you don’t move out, you’ll remain stuck in your old social network and you’ll be less likely to make new connections.”

Don’t be too eager

Meeting new people can be intimidating, but try to let your conversations flow naturally. Van Ingen: “If you’re dead set on making new friends, others might feel like you’re trying to force things. During introduction week, for instance, the social interactions are just a ‘side-effect’ of the activities you engage in together.”

“In a way, making new friends is quite similar to dating”, says Völker. “You want people to like you and find you interesting, and you don’t want to be seen as ‘fake’.” In this process, according to Völker, it’s important not to be too eager. “Ultimately, you want to have deep and meaningful friendships, but in the beginning it’s always good to read the room: maybe don’t start talking about your drug-addicted ex right after you’ve introduced yourself. See if there’s a click first and then slowly build from there. And also just enjoy discovering what you like.”

If you find groups too intimidating or if you’re not a fan of small talk – or if you just want to find someone to take somewhere at short notice – Bumble can be really useful. While it’s mainly known as a dating app, Bumble also offers friends and business modes. In friends mode, you create a profile with photos and list your hobbies, favourite songs and star sign, but instead of endlessly swiping past poorly lit mirror selfies and bad opening lines you get to connect with people who are looking for platonic companionship, just like you.

You can even specify what you’re looking for: someone to play video games with, a gym buddy, a play date for your kids or someone to do shots with at the pub. Person X (loves to belt out “My Heart Will Go On” at karaoke, avid Pilates fan) is looking for someone to go to the market with on Sunday mornings. And Person Y wants to watch ‘bad reality TV’ while sharing a cheese platter – and go for a swim tomorrow!

Van Ingen did research on the influence of social media on friendships and concluded that it can offer an excellent stepping stone. “Especially if you’re not very outgoing. It’s less scary to meet someone in person if you already know you have things in common.” Another advantage of using an app to look for new friends: if you don’t hit it off, you don’t have to worry that you’ll keep running into each other afterwards. But Van Ingen’s research also confirmed that friendships grow best offline. So at some point, you’ll have to put your phone away.

Listen to your feelings

When you’re building new friendships, you also have to know when to call it quits. Especially at the beginning of your student days, it can be tempting to cling to the first person you meet for fear of loneliness. Völker: “Getting hung up on one person is never a good idea. Listen to your feelings, and figure out what kind of relationship the two of you want.”

No, you are not stupid, you just have to study smarter

How to find a room in one week