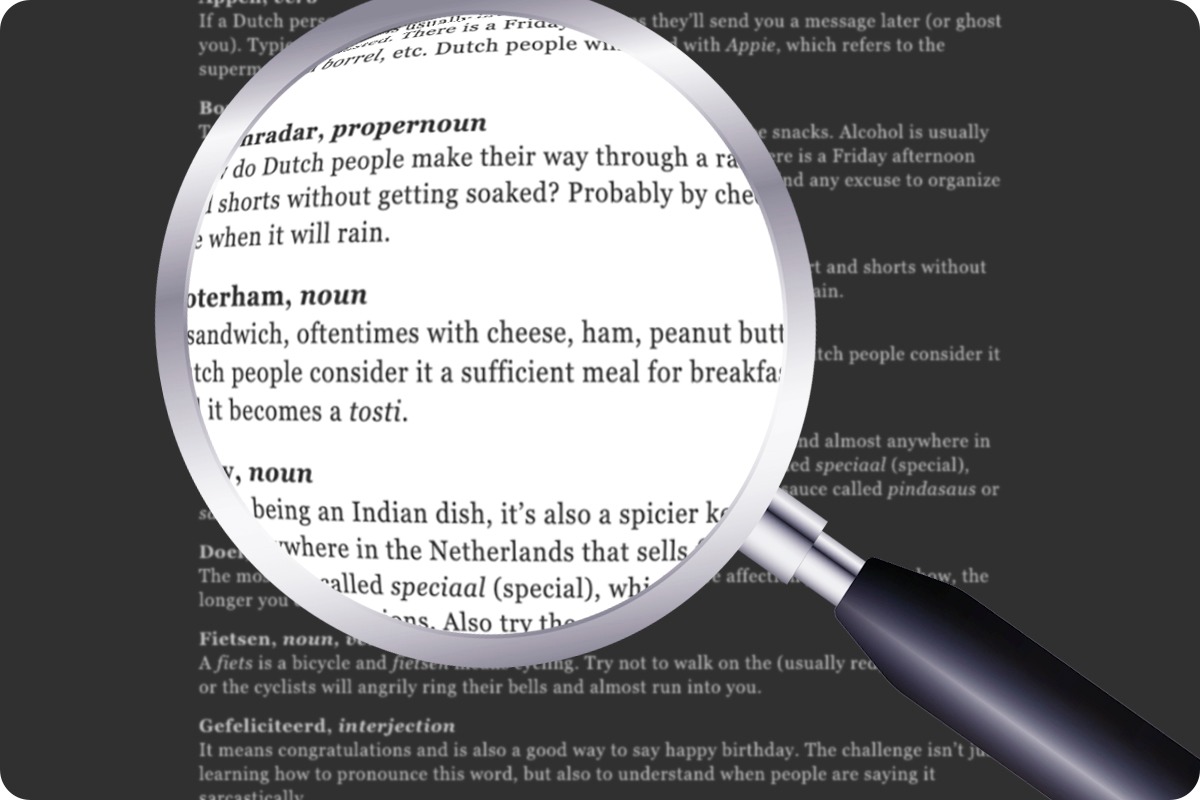 Want to impress your Dutch peers or understand them better without going through the hassle of taking classes? Check out some of the most useful Dutch words in our mini dictionary, and gain some important cultural insights while you’re at it!

Appen, verb
If a Dutch person says they’ll app you later, it means they’ll send you a message later (or ghost you). Typically they mean Whatsapp. Not to be confused with Appie, which refers to the supermarket Albert Heijn.

Borrel, noun
To get together for a borrel means you’re having drinks and maybe snacks. Alcohol is usually involved, but it’s not the best occasion to get absolutely wasted. There is a Friday afternoon borrel, Christmas borrel, graduation borrel, etc. Dutch people will find any excuse to organize a borrel.

Buienradar, propernoun
How do Dutch people make their way through a rainy day in just a t-shirt and shorts without getting soaked? Probably by checking Buienradar.nl to see when it will rain.

Boterham, noun
A sandwich, oftentimes with cheese, ham, peanut butter or sprinkles. Dutch people consider it a sufficient meal for breakfast or lunch. Grill it and it becomes a tosti.

Curry, noun
Besides being an Indian dish, it’s also a spicier ketchup and can be found almost anywhere in the Netherlands that sells french fries. You can also order a sauce called speciaal (special), which is a mix of curry, mayonnaise and onions. Also try the peanut sauce called pindasaus or satésaus.

Doei, interjection
The most common informal way of saying goodbye. The more affection you wish to show, the longer you can extend your farewell: doeiiiii!

Fietsen, noun, verb
A fiets is a bicycle and fietsen means cycling. Try not to walk on the (usually red) cycling paths or the cyclists will angrily ring their bells and almost run into you.

Gefeliciteerd, interjection
It means congratulations and is also a good way to say happy birthday. The challenge isn’t just learning how to pronounce this word, but also to understand when people are saying it sarcastically.

Gezellig, adjective
This popular Dutch word has no direct translation, but it refers to a pleasant and relaxed vibe that is experienced in social situations.

Hospiteren, verb
If you want to live together in a shared apartment, you might have to prove that you’re the ideal flatmate during a process called hospiteren. It’s supposed to be fun and informal, sometimes involving drinks and snacks. But because of the housing crisis you might feel more like a Roman gladiator competing for survival.

Huisarts, noun
The Dutch equivalent of a family doctor or general practitioner. They are notorious for telling you to buzz off and take some paracetamol (see: Paracetamolletje).

Kut, noun
A common Dutch swear word, and also the informal word for vagina. There is some overlap with the English usage of ‘fuck’, but it also refers to things sucking or going badly. If someone thinks an exam sucked, they’ll say the exam was vagina. Aside from genitalia, Dutch people also like to curse using diseases.

Kroket, noun
The kroket is a crunchy snack with warm, gooey ragu-style meat inside. At a borrel you might eat the smaller meatball-shaped version called bitterbal.

Lekker, adjective
The Dutch word for ‘tasty’, which is very versatile. Good food is lekker, nice weather is lekker, a sexy person is lekker. If you feel sick, you don’t feel lekker.

Niksen, verb
The Dutch have a special verb for the art of doing nothing. You’re nothinging.

OV, noun
Openbaar vervoer, or public transport. It’s free for Dutch and EU students who get student financial support and it’s crazy expensive for the rest.

Paracetamolletje, noun, [diminutive]
A painkiller that gets prescribed very often, regardless of whether you have stubbed your toe or are missing your leg. You’ll also notice that Dutch people like to use diminutives by adding -je, -tje or -pje after words to make them sound more insignificant or cute.

Patat, noun
Depending on where you are in the Netherlands, french fries will be called ‘friet’ or ‘patat’, the latter being more common. You can find them in snackbars in virtually every neighbourhood.

Rekening, noun
The bill. Be prepared for long strenuous arguments about how many drinks everyone ordered before you can leave.

Sjonnie, proper noun A Dutch name, which might also be used to refer to someone strange. It was also a tree next to the VU campus which went missing.

Studiefinanciering, noun
Dutch people and qualifying EU citizens get this government support for their studies. All students received a basic grant not so long ago, but it was replaced with a loan system. In 2023 there will be basic grants again, albeit small ones. You might think Dutch education is cheap depending on where you’re from, but a lot of Dutch people are pissed about the lack of financial support for students.

Spieken, verb
If you cheat on an exam, it’s called spieken. It’s akin to the word peeking, referring to the practice of sneakily looking at something.

Tikkie, noun
An app for financial transactions between people. Fun fact: the word tikkie is what Dutch kids proclaim when playing a game of tag.

Vrij, adjective, adverb
Free, which relates to freedom and not to something being given away without having to pay (gratis). The founder of VU Amsterdam wanted the university to be free from the state and church, although it was very much a religious university. If you add an N to the end of Vrije, it becomes the Dutch word for making love.

Ziekenhuis, noun
If your huisarts’ paracetamolletjes weren’t enough, you may end up in the ziekenhuis, or ‘sick house’. Also known as the hospital.

Want to put your newly gained knowledge to the test? Several of these words can be found in our internationals guide: What they don't tell you about the Netherlands.

No, you are not stupid, you just have to study smarter

How to find a room in one week