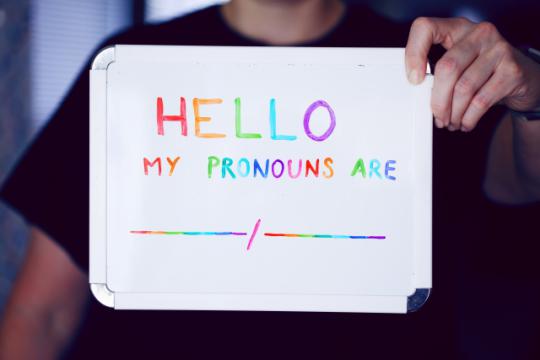 What are your pronouns?

Amsterdam Pride’s theme this year was my gender, my pride. New VU Students don’t have to choose between male and female during their enrolment for the introduction days anymore and can choose their pronouns on Canvas. But how are these changes reflected on campus?

It was the IT department of VU Amsterdam which told the LGBTQIA+ network VU Pride about new possibilities on Canvas.  Assistant Education Coordinator and VU Pride employee Niek Rood: “It was an update of the program. Fortunately IT made its way to us so the actual users could be asked which pronouns should be offered.”

Now students can choose between she/her, he/him, they/them or ‘other’. According to Niek the latter often refers to English umbrella terms. Niek – referred to as he/him – says it’s important that cis people [people whose gender aligns with the sex they were born with] state their pronouns as well. “To normalize it. If everyone goes along with it, it becomes less of a thing.”

People have been declaring their pronouns on social media for some time now, but gender inclusivity isn’t always on the radar of software developers according to Niek. “This update could have been there much sooner, but awareness is growing. Zoom has recently made it possible to declare your pronouns too.”

In Canvas users aren’t addressed by their pronouns, but according to Niek it’s especially beneficial for teachers to see how their students wish to be addressed. Students can’t see each other’s profiles in Canvas so Niek encourages them to ask for each other’s pronouns when in doubt. But isn’t that question potentially hurtful, because it suggests someone differs from the norm of whoever asks the question? “That is still less painful than being referred to with the wrong pronouns.”

Teachers should play a role here according to Niek. “We encourage them to ask students to add their pronouns when they state their names.” Asking around on campus, it turns out this doesn’t happen much as of yet. Naya Aljoudi has also only  ever been asked for their pronouns during the minor Gender & Diversity. There, it was made part of the round of introductions, a liberating experience according to Aljoudi. They were the only non-binary person in their study programme Law in Society. “I was the only one to share my pronouns and received strange looks when I did. The amount of people who addressed me correctly afterwards can be counted on one hand. The vast majority misgendered me.”

In the beginning they would correct people, but eventually they stopped. “It’s a tiring, discouraging process. I noticed it took a toll on my mental health.” In Canvas Aljoudi selected their pronouns at least a year ago, but that did not make a difference. “Within my programme Law in Society, I can’t remember one teacher who addressed me correctly. Instead I noticed they avoided referring to me altogether. Within the faculty they have a lot of work to do, also in the course material: every romantic couple in the examples of right of ownership consisted of a man and woman. There were more students who thought that was weird, but they didn’t say anything about it. Only afterwards some of them would come to me to talk about it.”

Across the board  , Aljoudi says there is plenty room for improvement too, for instance with adding more gender neutral toilets. “It was a very uncomfortable experience to have to go to the women’s bathrooms. And there should be attention to transphobic incidents. Create a space where people can go to report it. And keep the conversation alive. Change should come from a collaboration between trans people and non-binary people, and if people with privilege speak up during lectures or talk about VU policies, which makes the conversation more inclusive. It shouldn’t be the case that non-binary people are the only ones who have to carry the weight of educating others