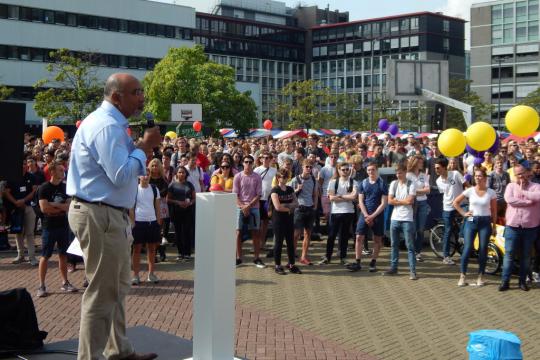 Record number of applications for universities

If the signs are to be believed, a record number of students are due to start university in September. The number of applications received around the deadline represents a five percent increase on last year.

As a rule, prospective students are required to register for a higher education programme before 1 May. Now that the deadline has passed, the institutions can set about making an estimate: how many first-year students can they expect to welcome in September?

From around 100,000 Bachelor’s applications at last year’s deadline, this year the total has risen to around 105,000. In other words, all the indicators suggest yet another increase in university student numbers.

Figures from previous years suggest that up to one third will end up not pursuing their application. Some will opt out in favour of a gap year, others will fail to get the grades they need and international applicants may end up selecting another country. Last year, 65,000 of the 100,000 applications were followed up. In light of this year’s higher total, that would amount to 69,000 first-year students entering university Bachelor’s programmes in September.

The comparison with last year is trickier than usual, as the 2020 deadline was pushed back a month – from 1 May to 1 June – due to the coronavirus crisis.

Dutch universities have been complaining for years that research funding has not kept pace with the growing student numbers, which amounts to a decline in the sum available per student. This year’s figures show no signs of a reversal in this trend.

At 40,000, the number of international applications is also higher than last year, and on the basis of past experience 20 to 40 percent of these applications are likely to be honoured. Last year, universities thought the global pandemic might deter international students, but against the odds their numbers remained steady.

An education bill currently awaiting Senate approval has been designed to cushion the impact of internationalisation on higher education, especially where teaching in English as opposed to Dutch is concerned. It proposes offering two tracks in programmes which restrict student numbers: one taught in English and one in Dutch. Student numbers on the English-taught track could then be restricted, while Dutch-speaking students would have unrestricted access to the programme via the other track. This would ensure that restrictions would not be at the expense of Dutch students.

Duisenberg believes this measure does not go far enough. He wants to see more options for admitting or excluding international students, even in programmes where student numbers are not restricted. In any case, the education bill has been shelved for the time being, awaiting the formation of a new coalition government.

In the meantime, universities are continuing to increase the number of English-taught programmes they offer, especially at Master’s level. But given their apprehension about the number of international students, surely one option would be to teach more programmes in Dutch? However, the universities do not see this as a solution. They argue that the decision to teach a programme in English often has more to do with improving standards and preparing students more effectively for their chosen profession. The universities’ position is that internationalisation is a good thing, but that it will bring even greater benefits if it is managed effectively.

The situation in higher professional education is different. Universities of applied sciences in the Netherlands have seen a decline of almost seven percent in the number of applications.