Dive into literature in the Pantheon next to the aula

VU Amsterdam has recently opened its own Pantheon, an art installation in which you can retreat with a real, physical book.

The architect Hendrik Petrus Berlage designed a ‘Pantheon of Humanity’ in 1915, after the example of the nearly two thousand year old construction by the Romans. It was supposed to be an octagon with a dome, where people could come to their senses underneath the light shining down on them from an opening above.

The Pantheon of Berlage never came into existence, but it inspired artist Henk Schut when he made his own Pantheon: a wooden octagon sitting to the left of the aula in the main building. It’s significantly smaller than the Pantheon that Berlage would have built, but it can accommodate more people than you would think. The outside has shelves with books, while on the inside you can sit on the uneven floor and lean against the enclosure. Taking a seat is surprisingly comfortable.

You can hear the sounds of bats

You can hear people talking about books that inspired them from the speakers built into the walls, but there are also ambient sounds and you can hear the sounds of the bats that fly around the campus at night.

Schut made those recordings over the course of quite a few evenings on the VU Amsterdam campus, where he would talk to people hanging out, exercising or working. “I found that rather difficult”, he says. “You have to overcome a barrier to get into people’s zone and talk to them. They might think: what does this guy want from me?”

He recorded the bats because they orient themselves by using echoes, reflections of their own sound. “I thought: that’s what people at VU Amsterdam do constantly as well, reflect on things.”

The Pantheon was officially opened by member of the executive board Marcel Nollen this Tuesday, attracting great interest. There was a speech from Nollen as well as from Hilde van Wijngaarden, director of the VU library, who explained that the art installation should be seen in the context of ‘Omboeken’, a project by the library to spread literature through unconventional means. According to Van Wijngaarden the books should leave storage and reach readers. This has already resulted in workshops, a Pride library and now the Pantheon. “You can expect more of these projects all over campus”, she said. 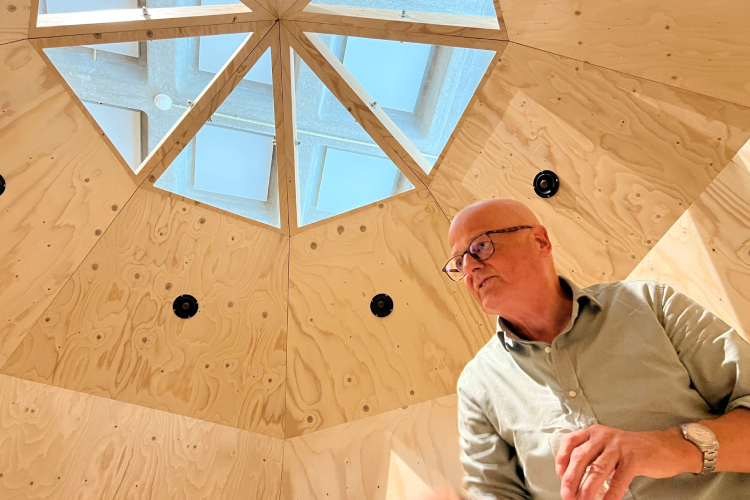 Artist Henk Schut in the Pantheon

The new chair of the University Student Council Joep van Dijk also held a speech. He grabbed one of the books from the shelves, Dostoevsky’s Notes from Underground, a book that was life-changing for him. He went on to explain how the VU library’s books can cover 30 kilometers, the distance between Amsterdam and Leiden.

Our university library houses 30 kilometers worth of books

Van Dijk is a gifted public speaker. During drinks after the opening (he drank a blackcurrant Fanta), he mentioned he gained his presentation skills from joining a speech club. He then began to laud Notes from Underground once more.

Schut calls his installation an ode to the imagination: “The idea came to me when I walked around on campus. You can sit down anywhere and become part of the community, talk to people, read, think. Not much further, at the Zuidas, someone would immediately come to you to ask you if you’d like to order a drink. There are no schools there, no parks. It’s entirely commercialized.”

His Pantheon is an ode to the sanctuary that the campus is. According to Schut, a group of Chinese students sat down inside and they were pleasantly surprised they could retreat on campus with a real, physical book. “Nowadays they only read on their phone.”