"Recently, my flatmates and I have been watching a lot of films. They are very interesting like this one we watched called The White Tiger. It is set in India and focuses on the tension between the servant and the ruler. At the starting point the servant is graceful to be ruled over. But in the long term there is ambition that makes the servant want more. I will not give you any spoilers in case you want to see the film. But the message is that a white tiger is very uncommon and in this case, it stands for a revolution. So this film takes a political stance, it tells us about the way people have been going against their rulers in India and other countries. The main character becomes more powerful than his ruler. He decides to stay in India and uses his power to change the country for the better.

I sort of did the opposite of what the main character did. I left my country because I was not happy with how Spain was doing things. That is one of the reasons why I’m here. But I have a good friend who is studying Political Sciences in Spain. I asked him why he was studying this, the politicians in our country are very corrupt. He said: 'I know, it’s the worst system, but that’s why I want to change it.' He does believe that it can be improved.

I really admire him for that, I don’t think I could ever do that. There’s a lot of personal interest in politics, that’s why I find it very frustrating.
I would rather modify my own world so my life is how I want it. You never know what is best for the whole group, but you do know what is best for yourself. And if others see how you change your world and they like it, they can change their own worlds themselves." 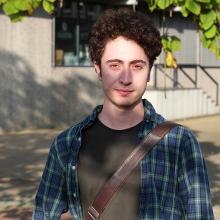