One million Dutch people are ‘bi+’ according to recent research. This group has (had) feeling for people of more than one gender. A large group of people, but how many people do you know that are bi+? How many bi+ people do you see in the media?

In the media, bi+ people are often invisible. I think about Queen’s lead singer, Freddy Mercury: he called himself bi, but was almost always referred to as gay by the media. Or about Dutch singer-songwriter Duncan Laurence: when he shared on social media that he identified as ‘bi’ he was accused of being gay and using bisexuality to sell better abroad.

A brilliant new year’s resolution would be: do not question the identity of bi+ people

The motivation behind these numbers is currently missing, but I have a suspicion: the invisibility of bi+ people is one of the pieces that can help to solve the puzzle why so many bi+ people experience psychological problems. Another factor in this could be the negative responses that people get when they come out as bi+. So, dear readers, perhaps a brilliant new year’s resolution would be: do not question the identity of bi+ people!

The large majority of the respondents, 72%, (fully) agreed with the statement ‘bisexuality can be discussed at VU Amsterdam'

On a more positive note: at VU Amsterdam’s campus bi+ issues seem to be doing quite good. In 2020 VU Pride sent out a mini survey to the 288 readers of our newsletter. We got 233 responses, a response rate of 81% - enough to make a marketing agency jealous! The findings? The large majority of the respondents, 72%, (fully) agreed with the statement ‘bisexuality can be discussed at VU Amsterdam’. Also, 50% of the respondents knew two or more bisexual people at VU Amsterdam. Fantastic, these numbers are a lot better. An optimistic end to this slightly pessimistic column after all!

And there is more good news: our monthly peer support group ‘VU Pride TalkS!’ on 15 February 2021 will focus completely on bi+. Also, on 17 February 2021 we welcome researcher Jantine van Lisdonk, who completed a PhD research on sexuality and gender at VU Amsterdam. She will talk about relationship diversity during our Wild Wednesday Webinar and take into account the role bi+ has played in her work.

Interested in participating in our bi+ events? Check out our Instagram. For question, ideas and other happy news around bi+ or other LGTQIA+ topics: send us an email. 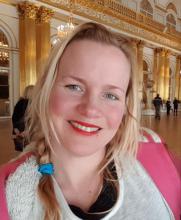