Sorry for the weather

I spent the last week back home in the UK, down in our little corner of Essex. My dad, recently retired from his job as a hospital manager, now manages a stretch of waterway called the Chelmer & Blackwater Navigation. These rivers reach the sea at Heybridge Basin, a lock that flows into the estuary. It’s a great spot for boating, and during my time home was the annual Boat Regatta; this involves boat racing, barbequing, drinking, and the greasy pole competition.

In order to run the greasy pole competition all boats that need to be moored past the lock have to had already come through. As I sat on the waters edge with my dad, waiting for the water level to rise, I noticed that the boat being raised had a Dutch flag on it. A little uncertain, I called out “Goededag?” to the skipper and his wife. They gave me an odd look and replied with “Goededag! Ben jij een Nederlander?” I couldn’t believe it. I get out of Amsterdam for six days and immediately meet a couple from Haarlem, taking their boat over to England for a long weekend stay. They asked what the occasion was, for the area was adorned with bunting and people milled around the local pubs, drinks in hand. I began to explain the concept of a greasy pole competition, before deciding that a simple “Wait and see!” would have to do. 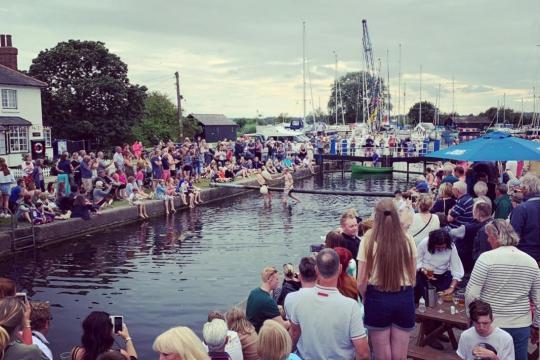 Once their boat had left the lock, the game was afoot. With some help from the local lads we hoisted the pole across the water, tied it securely on both sides, and sent out a helper to rub lard across the whole thing. Now the competition could begin. I was joined on the canal side by the Dutch couple, bemused expressions on their faces. The first two competitors, sacks in hand, slid out to the mid-point of the pole. A whistle blew, and the two men began wailing each other like their lives, or a few pints, depended on the outcome of this conquest. It then began to rain. Turning to my new friends I felt obliged to make a witty joke about the typical English climate we all know and love, but, being English, it just came out as “Sorry for the weather”.