The storm Ciara was the first time I have seen and heard lighting since I moved here, it is so odd to take something so minor for granted as assuming lighting and thunder always accompanied rain; that was the norm of rainy weather in Texas. Seeing the glimmer of lighting awakened memories of how the air smells when rain touches the parched earth; and the sight of ominously grey clouds rolling over golden fields.

Although the contagion was half a world away, I felt too close to it

Such memories ran through my head as I was looking at flight tickets for this summer. I admit, I have following the news of the virus since the outbreak was only in China. My masters’ advisor, Dr. Guy, was outside of Shanghai when the outbreak began. Although the contagion was half a world away, I felt too close to it. As the virus continued to spread it has been interesting to see the wild range of responses from nonchalance to utter alarm.

This, unfortunately, was another thing I took for granted; the ability to readily take a flight and be back home anytime. After seeing quarantines implemented in other areas, I never realized I could so easily be cut off from my family. It is not so much a question of the continuing availability of air travel but the open question of whether or not I should. My parents are older now, and although I know they would love to see me, I dread that I could pick up something at the airport and pass on this contagion to them.

It has been a little hard at the moment to concentrate when faced with such uncertainties. 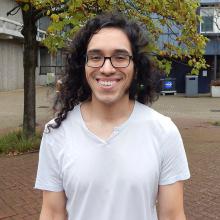 Stefan Reyes
PhD student in history, from the United States of America