Gene modification and overpopulation have instigated a new discriminatory bias

Since gene modification was introduced to the public, people have been increasingly applying for body enhancements and ‘skin discolouring’. From the beginning sociologists predicted an increase in the division between social classes, however it has been concluded that the impact is much more detrimental than first thought.

This ‘message from the future’ is written by a student of VU Amsterdam, as an assignment in the A Broader Mind course. The interdisciplinary course focuses on personal development and involvement with complex social challenges like poverty, sustainability and the digital world. This series is about genetic modification.

Furthermore, the amount of people migrating to planet Mars has increased even more. The analytical graphs below show the proportion of people that are genetically modified against people that are not on both planets.

Scientists say that this is connected to the fact that people living on Mars have a much higher average income than those living on earth. People with higher incomes are more likely to decide to genetically modify themselves. 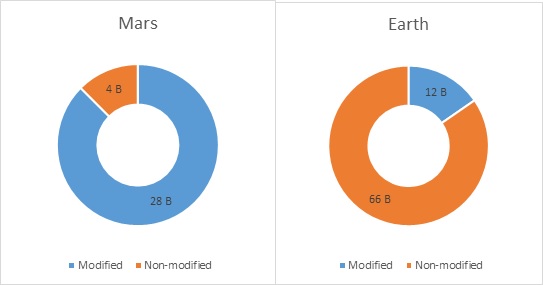 Katy Mac—a woman living on earth that went through an interplanetary job application process—says that a potential employer told her that the company is “not searching for non-modified workers”. She also claims that the position was given to another genetically-modified worker living on Mars.

“There are countless examples of this happening. Just because one is living on earth and isn’t genetically modified does not mean that they are less capable of doing their job. All the companies I have applied to are starting to think the people on earth are incomparable to the people on Mars, just because they are more genetically modified. This is another example of ‘Planetism’. Preposterous.”

The company has since received backlash, but the government of Mars has not yet reacted.